The Chinese PEV market lifted off the accelerator, with some 78,000 units registered in June, up only 77%, this slowdown from the three-digit growth rates of previous months is explained by the fact that in June, New Energy subsidies were slashed to vehicles with range lower to 150 kms, so most small City EVs stopped being sold, draining a significant percentage of sales.


With symbolic export numbers, the domestic market is more than enough to absorb the current Chinese production, helped by the fact that it is still a protected market and foreign OEMs hadn’t yet looked seriously at this niche, but with PEV quotas to be fulfilled in the near future, foreign brands are putting an effort, reaching 7% share. Of this (small) cake, 3% belong to Tesla, 2% to BMW, with the remaining manufacturers sharing the final 2%.


In June, besides the disappearance of most small EVs, several larger models hit record numbers, while the Roewe brand had a coming of age, hitting for the first time a five-digit performance, and even managing to snoop around the leadership race between BAIC and the leader BYD. 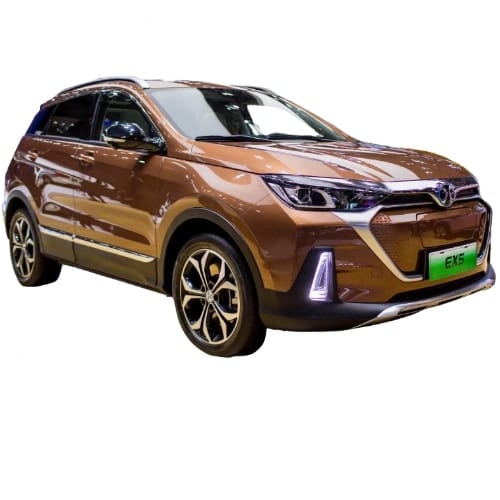 #1 – BAIC EX-Series: BAIC’s electric compact Crossover landed two years ago, but somehow, it has been overshadowed by the remaining lineup, a strange event, considering that it sits on one of the hottest segments around. Nevertheless, with the EC-Series offline, waiting for the new, longer ranger version, the EX-Series time has come and thanks to a facelift and revised specs (415 kms/260 mi NEDC range) and pricing ($28,500, before subsidies) in 2018, Beijing Auto’s Ugly Duckling is finally spreading its wings, having registered a record 5,708 units and becoming June’s Best Seller, a first for the Crossover. With BAIC’s little genius (EC-Series) injured, it’s time for other team members to shine, like the EX-Series.

#2 – Roewe Ei5 EV: In only its fourth month on the market, the Roewe compact wagon is already showing up on the Podium, thanks to a record 4,661 deliveries. It seems the Shanghai automaker struck gold with this original offer, not only the wagon body is unusual in China but, for the time being at least, it’s a unique design, with no ICE counterpart and, in true Roewe fashion, it is one of the most solid designs, inside and out, coming from a Chinese OEM. If only the specs (35kWh battery, 301 kms/188 mi range NEDC, 116 hp motor), were a tad better…Especially considering the price ($33,200 before subsidies).

#3 – BYD Qin PHEV: With the second-generation Qin just a couple months from landing, the first generation had another surprisingly good performance in June, with 4,606 units (new record), being BYD’s “Model 3” 10th consecutive “3-4 thousand units/month” result (Talk about consistency!). Sales are still going strong for BYD’s sports-sedan, and should continue in the 4,000-something level, at least until the new one arrives. As for the new generation, sales above 5,000/month should be the norm, becoming the Best Selling BYD.

#4 – Chery eQ: Chery was one of the Chinese brands to bet early in plug-ins, having won the models title three times in a row (2011, ’12, ’13), with its tiny QQ3 EV, now the automaker is trying to regain relevance with the eQ, the spiritual (and material) successor to the QQ3, having registered 4,434 units in June (year best), allowing it to collect a Top 5 position last month. A vehicle marketed to city dwellers, for USD 24,000 before incentives, you get a funky city EV, with the 22kWh battery providing just enough range (200 kms / 125 miles NEDC), to cover the needs of the urban jungle.


There weren’t many changes on the top positions, in fact we have to go down to #6, to see a position change, with the Roewe i6 PHEV sedan (4,028 units, new personal record) climbing one position, while the JMC E200, one of the few small EVs to escape the subsidies cut, was up to #7, thanks to a record 3,638 units.


But the Climbers of the Month were the BAIC EX-Series jumping to #10, up from #15, thanks to a record 5,708 deliveries, a new second consecutive record for the Crossover nameplate, while the Roewe Ei5 EV wagon was up 4 positions, to #14, thanks to a record 4,661 units, expect both models to continue climbing positions in the next couple of months, with the Beijing Crossover possibly reaching #7, while the Shanghai Wagon might reach the Top 10 soon.


Speaking of records, it is expected that the Tesla Model X had reached a new all-time record for an imported vehicle in June, with some 2,350 deliveries, allowing it to keep a Top 20 position.


Finally, the BAIC EU-Series rejoined the Top 20, in #16, and thanks to a recent facelift and improved specs, the sedan should climb a few more positions in the coming months.


Looking at the manufacturers ranking, BYD (19%, up 1%) recovered ground, thanks to the Yuan BEV landing, while the runner-up BAIC (16%, down 1%), lost share due to the EC-Series sales dip, with the EX & EU-Series unable to fully compensate this sales drop.


In Third Place, the Shanghai-based Roewe (12%, up 1%) holds the last place of the podium, with a significant advantage over the new #4, Chery (6% share), and with BAIC now only 4% above it, the SAIC brand is now going after the Silver medal.


Looking at the SAIC Group (Roewe + MG + Maxus + Baojun) as one entity, it already has 16% of the Chinese plug-in market, so it won’t be surprising to see it as the #1 OEM in this market soon. 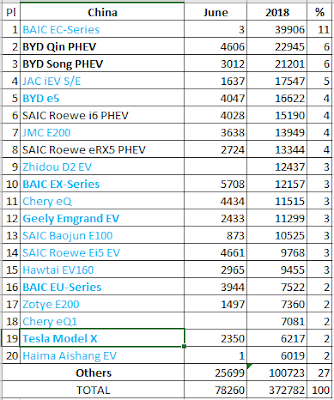