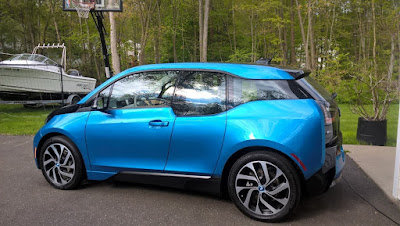 
After visiting relatives and taking coffee close by, I found two guys staring at the car.


New Bedford was a welcome surprise, with a number of slow chargers within the city limits and EV’s zooming around, two Chevrolet Volt II and three Nissan Leaf, one of them belonging to the town hall. No Teslas though. Nevertheless, it was the first place in the US where I felt having an EV wasn’t something alien to the locals. 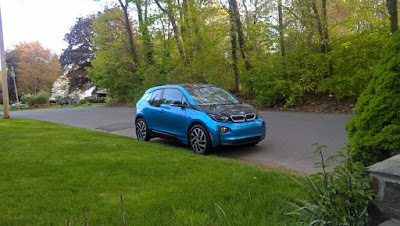 Day 12 – Back from New Bedford, MA to Waterbury, CT


The largest travel of this road trip, with 158 miles (255 kms), it would surely only be achieved using the range extender, but nevertheless I wanted to try and do it all in electric mode, so I stopped for a few minutes at the Fast Charger in Middletown, but not much was added, as the top 20% of the battery takes too long to charge.


Already in Waterbury, I noticed that the car in gas mode behaves like a regular hybrid, once the batteries have a minimum charge from regenerative breaking, it returns for a few seconds to electric mode. 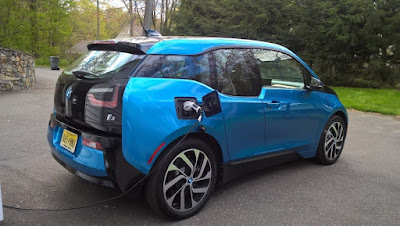 Day 13 – Preparing for the comeback


In a day spent packing and preparing the comeback, I found one lady in a Prius on the Dunkin Donuts parking lot, which said to me:


Saving the best for last, this was the trip I enjoyed most the BMW i3. The last part of the 90 miles was done in the middle of the New York traffic, and in this environment the German hatchback excels, with its agile handling and swift lane changes, while leaving other vehicles in the dust in red lights.


After leaving the car, it was time for the Likes and Dislikes of the BMW i3:


-          Striking Looks. I already loved the detailed design of the car, completely different from everything else on the road, with a character that reminded me something between Star Wars and an angry puppy. What I didn’t expected was that its design became a such a magnet, drawing attention everywhere it went.


-          Supple ride/Small on the outside, big on the inside. It is a small car, but it doesn’t feel like it on the inside. Because the battery pack is flat on the floor, the interior space is maximized and with the help of the high ceiling and large windows, you do not feel claustrophobic. With a surprisingly supple ride, you only realize the small size of the car when parking or changing direction.


-          Power. While it’s not Tesla-fast off the line, it builds up speed like few hatchbacks can and feels like it can pull an airplane.


-          Range extender. Range anxiety? What range anxiety? When the model came out a few years ago, I wasn’t really in favor of the Rex thing, but after trying it, I have concluded that it allows you to run more miles in electric mode than if you hadn’t, as sometimes you would have to limit yourself to the electric range of your BEV. Not in this case, with an average 120/130 miles electric range and fast charging availability, it does whatever other 30-something kWh battery EVs do AND you do not have to worry if you only have 15% battery charge, because you always have the Rex safety net to pull you out of critical situations. As an example, of the 800 miles (1.300 kms) I did in a week and a half, only around 30 were made in gas mode. Not bad, eh?


-          Small Size (For US roads). In Europe this is not an issue, as similar-sized superminis abound, but in US roads it feels rather small next to giant Trucks, Pick-ups and SUVs, and it might be one of the reasons why the electric BMW hasn’t catched on in the USA as it did in Europe.


-          iDrive. At first it was really unnerving working with the button-based BMW multimedia system, now that we are used to use touchscreens in everything, from cell phones to cars. The large number of menus and submenus are not intuitive and takes time getting used to it and even then, it was more distractive than the multimedia system on the Nissan Leaf.


-          Price. It is expensive regarding its size, even considering it has a Premium badge. Still. I feel tempted to buy one…