BMW i3, Renault Zoe and Tesla Model 3. Who will be Germany's Best Seller?

Some kind of click happened in the German plugin market after the Summer holidays, after two consecutive record months, November saw 10,985 units being registered, only the second five-digit performance, after the 11,926 units of October. It seems Europe's locomotive has finally been set in motion, which is a promising sign for 2020.

November brought another demonstration of strength from the Daimler Group, placing once again three models in the Top 5, besides the E300e/de twins keeping the monthly leadership, with 1,263 deliveries, their smaller siblings, the C300e/de twins, ended in 4th, with 719 registrations.

But the Daimler Group didn't stopped there, with the tiny Smart Fortwo EV ending the month in 3rd, with 828 units, its best result since December '17.

The remaining two spots in the Top 5 went to the local heroes VW e-Golf (#2, with 925 units), and BMW i3 (#5, 546), with the Volkswagen veteran impressing by its vitality, even with its sucessor in bilboards everywhere (and starting to roll of the lines of Zwickaw into the hands of a few lucky VW employees. 81 ID.3's were registered in November…)

Regarding the YTD table, the Number One Spot continues pretty much open to discussion, with all top 3 models underperforming (the Dutch market black-hole effect is making itself felt…), the BMW i3 still managed to overcome the former leader Renault Zoe and become the new #1, while at the same time time, it has won a precious advantage (665 units right now) over the #3 Tesla Model 3.

With only 1 month to go, this is still a 3 horse race, and i guess the decision lies in the hands of...The Netherlands.

Depending on the priority given to the Dutch market in December by the three brands, the Best Seller can either stay in Germany, cross the border to France, or go halfway the world to Palo Alto...But if i had to bet on a winner, i would go for...BMW.

While the Model 3 will probably end December ahead of the other two, in the 2019 count, the disadvantage regarding the leader (665 units) is significant, so it will take an extraordinary performance next month which, while not impossible, is becoming even more difficult by the black-hole effect of the neighboring Dutch market.

As for Renault and BMW, the distance is small (101 units) enough for a small allocation difference to make a big difference, and with the French maker still in volume ramp up of the revised Zoe, it wouldn't be surprising if the priority to the Dutch market would prevent it to have enough units to beat the local BMW i3.

One thing is certain, this is probably the most exciting race among the top markets, so don't forget to bring the popcorn...

Outside the podium, there's also a lot to talk about, the Mercedes E300e/de twins climbed to #6, and although the #4 Mitsubishi Outlander PHEV is too far from the Mercedes model for the Luxury sedan to reclaim the Best Selling PHEV title, next year the Japanese SUV will surely lose out to the Mercedes.

But the PHEV resurgence didn't ended there, with another Mercedes double, the C300e/de, jumping three spots, to #16, while we see a new face in the table, with the new BMW 330e joining the ranking, in #20, making 4 BMW's in the Top 20.

Outside the Top 20 there are also significant performances: the new Audi Q5 PHEV registered 276 registrations, a new personal best, while its relative VW Passat GTE scored a record 350 units, and the Porsche Cayenne PHEV delivered 374 units, placing it just 8 units behind the #20 BMW 330e...Will we see the Porsche SUV ascend to the Top 20 in December?

Outside the podium, the rising Mercedes (8%, up 1%) has surpassed Mitsubishi and Volkswagen, with the three-pointed-star now aiming to displace Renault from the last place of the podium in December, while the Smart brand (7%, up 1%) is looking to end the year in 4th. 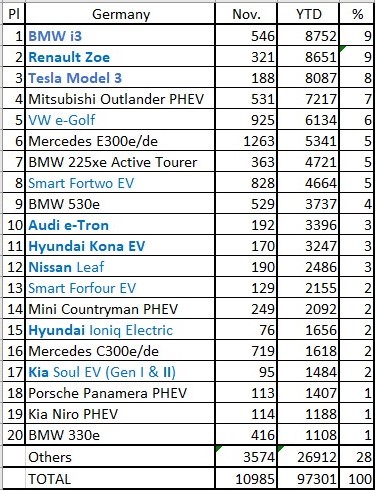