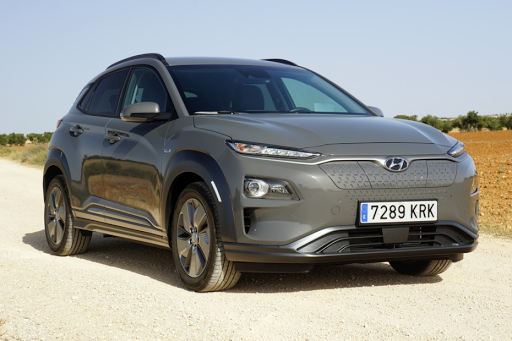 Record Month
Despite the Spanish automotive market being in the doldrums, with the overall market dropping 37% this year, the plugin market is better than ever, having scored a record result in October, with the YTD numbers growing 67% YoY, to 25.610 units.
But growth wasn't the same between BEVs and PHEVs, because while pure electrics are growing 30% YoY, to 11.928 units, plugin hybrid sales are jumping throught the roof, shooting 124%, hitting 13.682 units, with the latter winning significant share (58% PHEV vs 42% BEV in October, against 53% PHEV, 47% BEV in 2020), a significant fact in a traditionally BEV-friendly market.
Share-wise, last month plugins reached 5,9% (2,5% BEV), pulling the 2020 PEV share to 3,8% (1,8% BEV).
As for last month best sellers, we had a surprising winner last month, with the Hyundai Kona EV winning last month Best Seller trophy, thanks to a record 267 registrations, followed by the Renault Zoe (253 units), while the Peugeot 3008 PHEV closed the podium, with 233 deliveries, a new record for the Peugeot SUV.
These good performances from the Hyundai and Peugeot models allowed them to climb positions in the YTD table, to #5 and #4 respectively, with the French SUV coming closer to the current Best Selling PHEV and SUV trophy holder, the #3 Kia Niro PHEV, now just 15 units ahead, so expect a close race between these two.
But the Climber of the Month was the Volvo XC40 PHEV, that was up 3 positions, to #9, highlighting the popularity of the most compact Volvo, while behind it, the Nissan Leaf climbed to #10 (discounts always work to move metal...) and the Kia Xceed PHEV jumped two positions, to #16.
Highlighting Peugeot's good moment, besides the 3008 PHEV monthly win, the 508 PHEV was up to #18, thanks to 91 deliveries, the midsizer best performance since January, while the 2008 crossover joined the table, in #20, thanks to a record 137 registrations, but PSA's production ramp up is also benefiting the other brands, as the Citroen C5 Aircross PHEV delivered 127 units in October, while there were 72 deliveries of the Opel Corsa EV.
But PSA is not the only OEM introducing new models and ramping up production, BMW had its Mini Cooper EV reaching the 119 deliveries, and with the electric hot hatch only 9 units behind the #20 Peugeot 2008 EV, expect the British model to join the table soon.
Mercedes is also ramping up the volumes of its extensive PHEV lineup, with 147 units of the A250e, 144 of the GLA250e, 82 of the GLC300e/de and 76 of the CLA sports sedan, while the Volkswagen Group saw the Seat Leon PHEV reach 109 deliveries last month and the new Golf VIII PHEV land with 55 units, a promising result for the new model, but on the other hand, the Volkswagen new ID.3 had 129 deliveries last month, already down from the 166 units of September's landing month.
Does this ID.3 drop mean anything? We have to wait a few more months to know if it's an allocation or demand issue, but comparing the Golf PHEV and the ID.3 results, it seems the plugin Golf will continue to be an important player in the market.

On the manufacturers ranking, the top two positions remained stable, with Peugeot (12%) ahead, followed by Kia (9%), that has displaced Renault (8%) to the 3rd spot.

Outside the podium, we have Hyundai and Volvo, both with 7% share, looking to displace Renault from the Bronze medal. 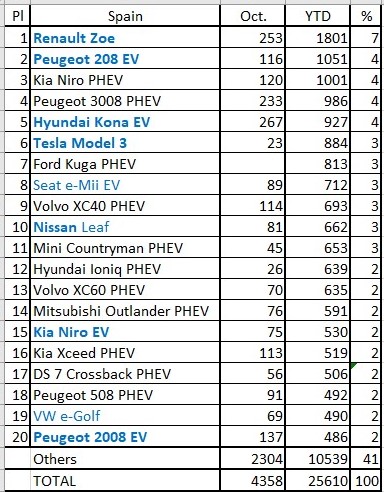