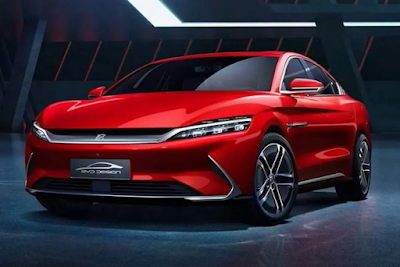 If the overall Chinese market ended the year on a positive note (+12% YoY), plugins ended with a record month, growing by 50% YoY in in the last month of the year, to a record 224,000 units, and this time it were PHEVs that grew faster (+108%), than BEVs (+42%), but despite this recent uptick from plugin hybrids, BEVs ended owning 80% of the market, which, incidentally, was the same score of 2019, so it seems plugin hybrids have found their corner of the market, especially in higher end models.

But looking at the bright side, the only way is up, with only minor subsidy changes happening in the foreseeable future, next year we should see the market reach a few months with two digit shares, preparing the disruption to finally set in by 2022...In the largest automotive market in the World.

And once we get to that point, then it's game over for ICE.

Looking at December Best Sellers, we have 3 City EVs, confirming the return of small EVs to the spotlight, with the Wuling EV keeping the Best Seller status.

A big name for a small car, the Wuling EV scored 33,489 units last month, its 6th record score in a row, but the difference regarding previous months wasn't significant, so it seems the production ramp up (or is it demand?) has already peaked, but expect the tiny four-seater to continue in the podium positions throughout 2021, as it is one of the cheapest EVs on the market ($4,200!!!), and yet, it’s not that bad, as the SAIC-GM-Wuling joint-venture model can seat 4 people in car that is a tad larger (2,917 mm / 114.8 in) than a Smart Fortwo EV. At this price level, the Wuling EV is a disruptive force in urban mobility, not only against 4-wheeled private transportation, but also against 2 and 3-wheelers. This EV is becoming a game changer in China, and should do the same elsewhere, if (when?) it manages to expand to overseas markets.

The poster child for electric mobility hit a record 23,804 units last month, which was somewhat less than expected, but then again, the shadow of its younger sibling Model Y, set to land in January, could be the reason for this. Looking at next year sales performance, expect it to remain more or less on the current numbers, because the bulk of growth in 2021 should come from the new MiC Model Y.

Probably inspired by Deng Xiaoping famous quote: "It doesn't matter wether a cat is black or white, as long as it catched mice", Great Wall decided to create a Cat Pack, transforming its tiny R1 Smart-lookalike into the Black Cat, launching the R2 model (think Scion XB/Toyota Urban Cruiser kind of vehicle) as the White Cat, and to lead the Pack, Great Wall has just successfully launched (2,016 in its landing month) the Good Cat, a chunky (and funky) compact hatchback (VW Golf sized) that kinda looks like a Porsche 356 in the front, a Toyota from the side, and the back...Well, it’s its own thing. But enough of the Good Cat, we will have plenty of time to talk about it in 2021, we are here to talk about the Black Cat, that delivered 10,010 units in December, it's 3nd record score in a row, creating great prospects for the Cat Pack in 2021

BYD's flagship model continues to grow, having registered 9,007 units in December, its 5th record performance in a row, so it looks the production ramp up is still developing. One of the most competitive domestic EVs on the market, the flagship BYD is becoming a regular in this Top 5, thanks to competitive pricing, it's the size of a Model S, and yet it costs only $32,800, less than the cheaper Model 3. But price doesn't tell the whole story, with a cutting edge 77 kWh LFP battery allowing it to reach 605 km (376 miles) NEDC range (think 400 km / 250 miles in real world), the Han EV is a whole package, with good looks, competitive specs and features, with the killer prices being just the icing on the cake. Oh, and if we were to add the 3,082 units of the PHEV version, then the Han would have been 3rd, with 11,483 units, not bad for a flagship model, right?

Compared with the bare basics Wuling EV, the Baojun E-Series (E100/200/300) are the SGMW more hip and upmarket city models, with demand hitting record levels, with 8,992 units being delivered in December. The access to the current subsidy, added to competitive pricing (CNY 93,900 / USD 14,700) before subsidies, makes them appealing for young urban drivers, as well as car-sharing companies and other fleets. 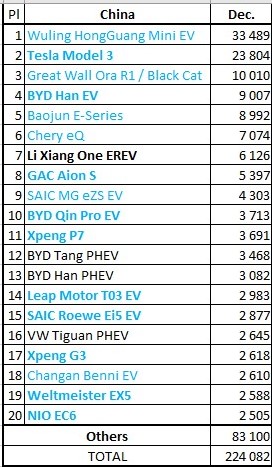 Looking at the remaining Best Sellers table in December, in a record month, several models hit best ever scores, like the Chery eQ, with 7,074 units, or the Li Xiang One, that with 6,126 units, was last month Best Selling PHEV, consolidating its status as the Best Selling SUV and the most successful model coming from a local EV startup.
Speaking of local startups, there were several models on this category shining, besides the aforementioned Li Xiang, Xpeng also had a record month, with its P7 sedan hitting a record 3,691 deliveries, thanks to the continuing production ramp up, while the older G3 crossover had 2,618 units, its best score in 18 months, Leap Motor saw its small T03 reach a record 2,983 units, while the much hyped NIO saw its new baby, the EC6 sports SUV, become the brand best selling model in December, with 2,505 deliveries.

A reference also to the surprise appearance of VW's Tiguan PHEV, in #16, with the compact SUV scoring a record performance of 2,645 units, while the Changan Benni EV profited from the recent restyling to show up in #18, with 2,610 units, the hatchback best score since 2017.

Outside the Top 20, a reference to the #21 Geely Emgrand EV, with 2,503 units, the sedan best performance in 18 months, so Geely's bread and butter model might be headed for a (much needed) revival in 2021, while NIO's flagship, the ES8 full size SUV, had its best score in 2 years, by delivering 2,009 units. 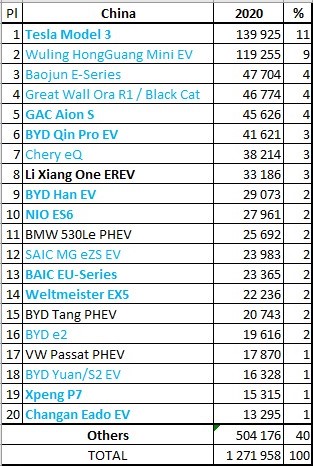 Looking at the 2020 ranking, the Model 3 is the 2020 Best Seller, with a commanding 20,000 units lead over the runner-up, but below it, the #2 Wuling Mini EV is already preparing next year's assault to the Best Selling EV title in China, as the tiny EV won all monthly trophies since September, while in 3rd we have another SGMW model the Baojun E-Series, that surpassed GAC's Aion S in the last stage of the race and secured another medal for the joint-venture.

This highlights the latest trend in China, City EVs are returning to the spotlight, not only with the SGMW EVs, but others are also earning the spotlight, like the Great Wall Ora Black Cat, that ended the year in 4th (it had been #11 in the previous year), the #7 Chery eQ, thus making 4 City EVs in the Top 7. Just counting these four models together, we get a quarter million units, or 20% of the total EV market...

Speaking of the flagship BYD, i was going to add "Best Selling full size model" to the Li Xiang One number of titles (Best Selling PHEV and Best Selling SUV), but the truth is that if we add both of the BYD Han versions (BEV and PHEV), we get almost 41,000 units for the big sedan, so i believe it's best to split the title between both, as 41,000 units for a full size model model that only started halfway throught the year is truly amazing, especially if we consider that the global category leader was the Audi e-Tron, that ended the year with 47,000 deliveries...
With this in mind, i believe the 2021 Full Size Best Selling EV in the World will probably be the BYD Han.

XPeng also had reasons to celebrate as the much hyped P7 ended the year in #19, being the 4th local startup model on the table, another significant change regarding 2019, because at that time, there was none (and the Tesla Model 3 was only #8, imagine that...).

Looking at the manufacturers ranking, the Surprise of the Year was the SGMW joint-venture (15%) breaking a 6 year winning streak of BYD (14%, down 1%), thus becoming the 2020 Best Selling manufacturer, with Tesla (11%, down 1%) securing the last place of the podium.

Expect these last two to increase their share in 2021, thanks to the Tesla Model Y and VW ID.4 launch.

So, long story short, in 2020, there were three main stories in the Chinese EV market:

1 - The Tesla Model 3 became the Best Selling EV, the first time a foreigner achieves such a feat;

2 - Local startups, lead by NIO, are growing fast, and are already starting to show up on the radar, so their next step is to gain scale fast in order to get to six digit sales numbers per year and thus securing their survival from the big sharks;

3 - City EVs returned to the spotlight, proving that Chinese OEMs are in a unique position to dominate that vehicle category (and future autonomous pods?), and in that context, SAIC was the biggest gainer of the year, managing even to steal Tesla's thunder towards the end of the year (but don't tell that to Wall Street...).