In December, the big news were of course both Teslas having their usual last month of the quarter peak, with the Model X scoring a record 360 deliveries, winning the monthly Best Seller award, while the Model S registered 267 units, allowing a 1-3 podium for Tesla that month.

The intruder between both Teslas was the Chevrolet Volt, Canada's favorite Plug-in, that scored 300 units, up 10% YoY.

Regarding the full year ranking, the Volt won once again the Best Seller status, its sixth title in this market, scoring a new all-time record on the way, with 4.313 units.

But the Volt wasn't the only model to bring smiles to Chevrolet, the Bolt reached Second Place in its first year on the market, with 2.122 units, allowing the American brand to make its first 1-2 win.

Bronze went to Tesla, but this time it wasn't the Model S to win the medal, but its younger brother Model X, that thanks to 1.803 units, outsold for the first time the Model S.

Elsewhere, we should highlight the Hyundai Ioniq BEV performance, ending the year in Sixth, despite the chronic production constraints that afflicts the Korean model, something tells me that if they didn't existed, a podium place could be possible for the Hyundai nameplate.

Looking into January preliminary results, we have the Chevrolet Volt leading once again, delivering 226 units, followed by its younger Bolt relative, clocking 187 registrations, all while the recently arrived Mitsubishi Outlander PHEV scored an impressive 174 registrations in its first full sales month, which could signal a promising career for the Japanese SUV. 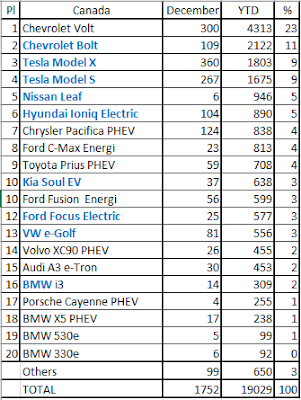 Looking at the full-size vehicles general ranking, this time the Model S was only Third, as the BMW 5-Series jumped to #1, inclusively surpassing the chronical leaders Mercedes CLS/E-Class.

Looking into 2018, expect the Model S to have plateauing sales, which will place it around Second / Third Place once again.

Looking at the Model X general placement in its class, the record performance of December allowed the Sports SUV to reach the podium, with the Model X collecting a Bronze Medal, it seems the Minivan-Sports SUV-Crossover from Tesla is coming into its own and replicating the Model S in its class.