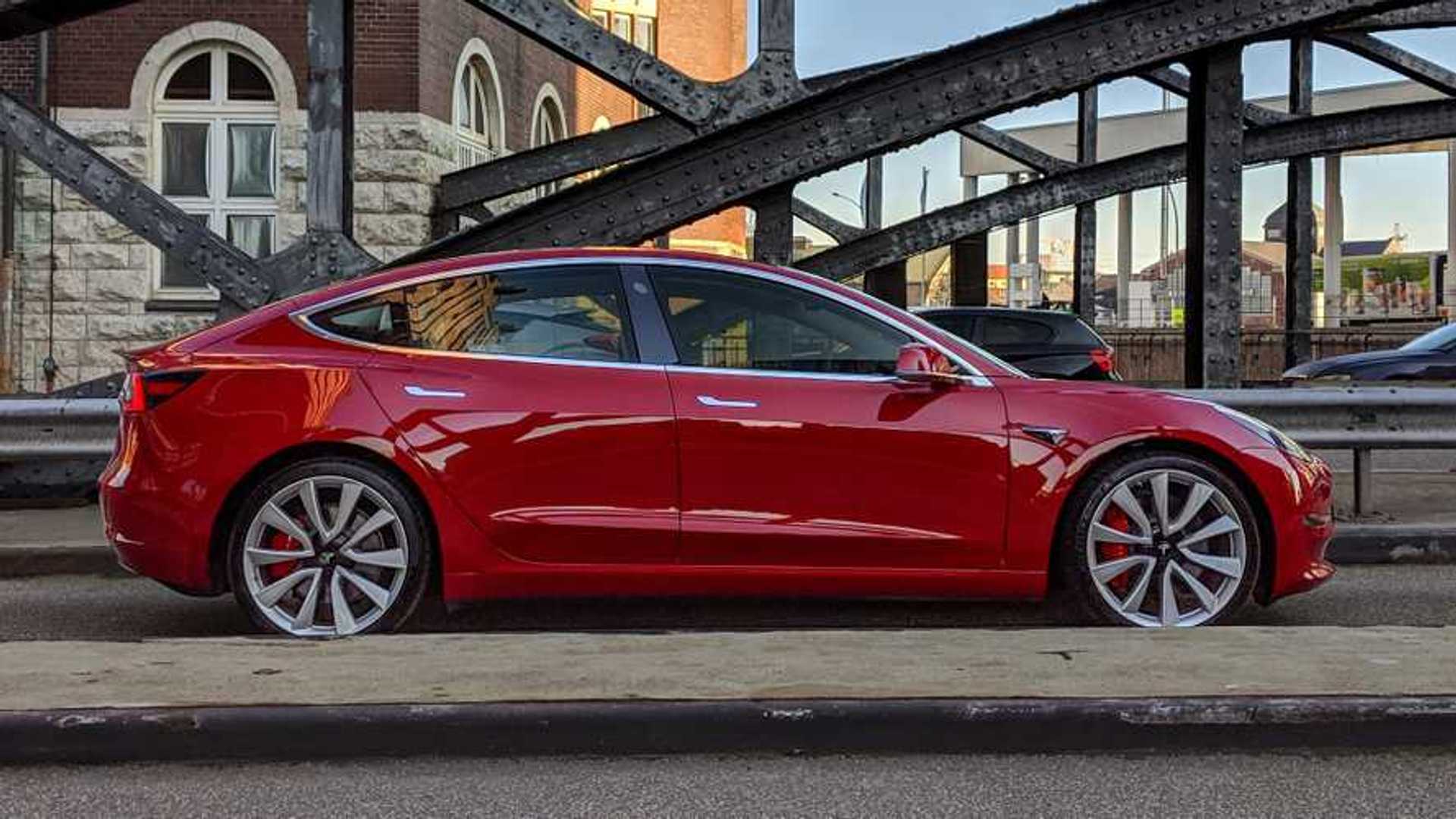 The European passenger plug-in market registered some 37,000 registrations in April, growing 30% regarding the same period last year, a good performance considering that the overall market is still in the red (-1% in April).


Looking at other fuels, diesel sales continue its never-ending slide, dropping 12% YoY, with its share dropping from 36% to the current 33%.


The big news in April was the Renault Zoe beating the Tesla Model 3 in April, while the BMW i3 rounding up the podium, in 3rd.


Interestingly, excepting the waiting-for-the-62kWh-version Nissan Leaf, and the recent Tesla Model 3, all the remaining Top 5 Best Sellers had 50%-plus growth rates, which is good news, and proof that unlike the USA, the Model 3 isn’t drying up sales from other EVs.

#1 Renault Zoe – The 4,079 deliveries of April signaled a 64% growth rate for the French hatchback, an impressive performance, considering the much improved “new” Zoe (50-60 kWh battery, driving aids, lower price…), and the upcoming Peugeot 208 EV, are just a few months away. As for market individual performances, the Zoe continues as popular as ever in its domestic market (1,472 units, up 53% YoY), and there also were positive numbers in Germany (939 units), and Italy (398), a market where the Renault model benefited from the new local incentives to beat its own sales record, after 6 years on the market.

#2 Tesla Model 3 – After a deliveries peak in March, the posterchild for electromobility has dropped to more normal performances, with Tesla delivering 3,738 units of its sedan. Looking at individual markets, the midsize model was mainly delivered in Norway (720 units), Germany (514), Netherlands (467), Switzerland (492) and Sweden (446). May seems to follow April performances, but expect another Tesla tide next June.


#3 BMW i3 – The German hot hatch sales were up 53% in April, to 2,841 units, with the BMW pocket rocket benefitting from the age-old formula “bigger battery = bigger sales”, and not feeling the sting of the Model 3 arrival. Looking at individual countries, Germany (762 units), Norway (467) and the UK (290) were the main markets, while in April, Innogy completed the start of its Warsaw car-sharing fleet, helping Poland to register an additional 315 i3’s. Looking into 2019, expect the Star Wars-inspired EV to continue growing, so it should continue to be a regular face in this Top 5.


#4 Mitsubishi Outlander PHEV – Indifferent to the current doom and gloom of plugin hybrids, and being the only PHEV able to follow the pace of the Best Selling BEVs, the Japanese SUV had 2,351 registrations in April (up 89%!), continues to be popular in the UK (500 units), but also in Germany (663 units), while in France, numbers got to 281 deliveries. This case study of a PHEV succeeding in a BEV-friendly environment, has to do with its unique mix of utility, space, decent electric range (including Chademo fast-charging) and affordability. On the long run, one wonders how long the Outlander PHEV will resist to the BEV wave, although, with no direct BEV competitor in the short term, the Mitsubishi model could still rack up lots of sales this year without major worries.

#5 Nissan Leaf – Europe’s 2018 Best Seller was only 5th in April, with 2,161 units, down 38% YoY, but fear not, as the new 62 kWh version should start deliveries soon, allowing the Japanese hatchback to resume the growth path and keep up with the pace of the Continent Best Sellers. In April, the main markets were Norway (386 deliveries), France (347), and The Netherlands (254). A special reference to the 199 registrations in Italy, thanks to the start of the new incentives program there. 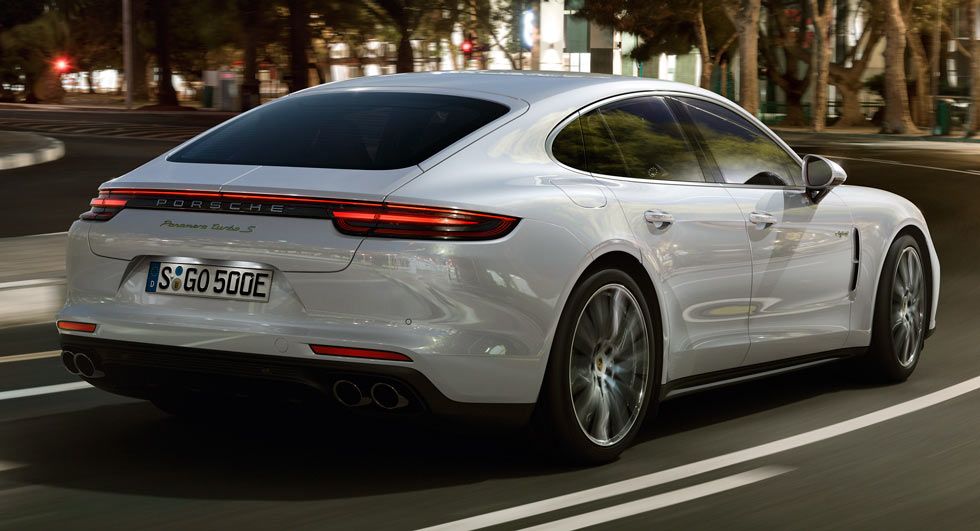 Looking at the 2019 ranking, this time the top positions remained the same, although the Mitsubishi Outlander PHEV is getting closer to the #3 Nissan Leaf, with only 310 units separating them. The 62 kWh version will be a much needed boost for the Japanese model, if it wants to keep its podium position. And to think the Nissan model was the Best Seller in 2018…


If there isn’t much to talk about in the first half of the table, on the second half of the table things are more interesting, the BMW 225xe Active Tourer was up one spot, to #13, while the Audi e-Tron continues to climb the ranking steps, now in #15.


The Smart Fortwo EV jumped 2 positions to #17, with the tiny EV watching its sales grow 58% YoY, a promising result, especially considering there are talks that the Smart EV will receive a 30 kWh battery later this year.


In #20, we see the new generation Volvo V60 PHEV joining the ranking, signaling the Swedish nameplate return to the Top 20, after 2 years of absence.


Outside the Top 20, we should notice the good start of the new Mercedes E300e/de twins, with 762 registrations last month, while the Porsche Panamera PHEV scored its best result (719 units) in the last 8 months, boding well for the upcoming Porsche Taycan.


Nissan and Renault, both with 9% share, are running for the 3rd spot, while Hyundai is not far behind, with 8%. 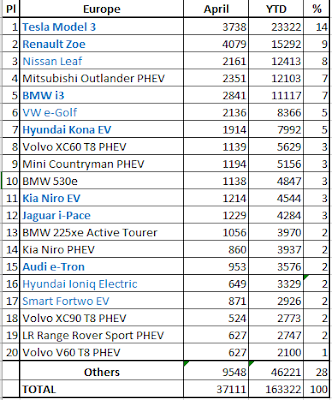