Interestingly, both powertrain technologies are helping out to pull the market up, with PHEVs even growing faster (+262%) than BEVs (185%)...And this despite the lack of meaningful incentives for plugin hybrids.

Hell, even Fuel Cells had a record month in May, with 40 registrations, 36 of them being Toyota Mirai(!), with FCEVs registering more units in one month than it had during the whole year of 2018!

In May, the Tesla Model 3 (419 units) was surpassed by the Hyundai Kona EV (434), a brilliant performance for the Korean, which makes us wonder how much of a competitor the Hyundai crossover would be to the Model 3, if it wasn't battery constrained...

The Kia Niro EV (369 units, new personal best, for the third time in a row!) underlining the current competitiveness of the Hyundai-Kia EVs. And the serious lack of batteries that the Korean Group suffers.

A bit surprisingly, the VW e-Golf was 4th, with 227 units, a meritable performance for a model that is less than a year from being replaced by the much more competitive VW ID.3. I guess name recognition is a strong point here...

Looking at the 2019 ranking, we have a new face in the podium, with the Kia Niro EV jumping two places, to 3rd, surpassing the VW e-Golf and Nissan Leaf, with the Japanese hatchback experiencing its worst month (126 registrations) since the 40 kWh landed. The 62 kWh version can't come soon enough...

With the initial production hiccups apparently a thing of the past, the Audi e-Tron continues to surge, having jumped 6 positions and now showing up in #11, having registered 161 units last month, placing it as the new Best Selling Luxury PEV.

The Jaguar i-Pace joined the ranking, in #19, thanks to 26 registrations, with the British Sports-Crossover-Thingy being the 12th BEV in the ranking, while at the same time, the i-Pace was the maker best selling nameplate in May.

A final mention for the Tesla Model S (11 units) and Model X (9), that had their best performances since last January, so expect both to recover soon and join the Top 20 during the Summer. 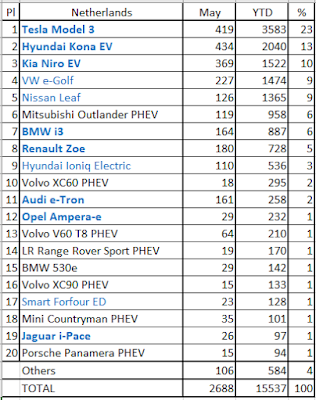 The answer is now being written, comparing the Model 3 deliveries against its midsize premium competitors, we can see that it is ahead by a sizeable margin, although in May both the BMW 3-Series (579 units) and the Volvo S/V60 twins (591) managed to surpass the Model 3. Of course, June is coming, and with it, another deliveries peak for the Model 3, allowing it to recover any ground lost in the previous two months.

Maybe, maybe not (the PHEV version of the Volvo S/V60 has less than 10% of the nameplate sales), but first, it will have to catch the Swedish twins, to then focus on the Tesla.