With the Chinese market suffering from the general lockdown due to the Coronavírus, sales took an expected beating, with only 15,000 passenger PEVs in February, the worst result in over 3 years, representing a 65% drop year on year.


Still, it could have been worse, especially considering the overall Chinese market was down by 82%(!) in February.


One positive sign of the February numbers, was the return to a BEV-friendly market, with BEVs dropping only 57%, while PHEVs fell 81%, leading BEVs to have 84% of plugin sales in February, in line with the 86% of last December, and pulling its 2020 share to 73%, so the “Go BEV, or Go Home” mantra is back to this market.


Looking at February Best Sellers doesn’t give you much of an idea of where the market is going, as it has more to do with existing stock and the extension of time that the factories were closed, than demand-driven logic.


The poster child for electric mobility delivered 2,284 units, (including 152 imports), winning its second monthly Best Sellers title in a row. And while it’s not (yet) the disruptive result that many expect from the Tesla sports sedan, let’s remember that this performance was strongly conditioned by the Coronavírus outbreak. With the worst of the crisis now a thing of the past in China, expect the production to ramp up quickly in the coming months, so the sporty silhouette of the Model 3 should become a common sighting in Chinese streets soon.


The maker’s reply to the GAC Aion S and BAIC EU-Series has made it to 2nd place last month, earning BYD’s first podium position since last July, thanks to 1,477 units, but the BYD sedan will need to step up its game in order to stay among the Best Sellers, after all, not only the Aion S is cheaper AND has better specs (59 kWh battery and 510 NEDC electric range for the Aion, 53kWh and 421 kms for the Qin). The game has moved on, BYD…


Considering the circumstances, things continue to go well for the Aion S, with the sleek sedan securing another podium position, thanks to 1,433 units. Currently the most competitive domestic EV on the market, the GAC model is sure to continue a regular in the podium positions, once the market returns to its regular pace.


Last year’s Best Selling model in China, and only the second EV, after the Tesla Model 3, to register more than 100,000 units in one year, Beijing Auto’s EU-Series sedan is back among the top sellers, hoping to ramp up its new R600 (60 kWh battery, 460 kms NEDC electric range) version swiftly, in order to beat the GAC Aion S in the race for best-selling EV.


After a long, hard, road, NIO is finally showing up among the Best Sellers, becoming also the first domestic EV startup to place one model in the monthly Top 5, thanks to 671 deliveries. Facing an uphill battle, after all, marrying “Premium” and “Chinese” in one EV-only brand is no easy task, the fact is that NIO products and concept are intriguing and add something new to the current EV landscape, not only they have battery swap stations, but they also increase regularly their models battery capacity, from the initial 74 kWh, back in 2018, to 80 kWh in 2019, and now in 2020, they have launched a 100 kWh option. Even better, the brand allows existing owners to upgrade their current batteries to the 100 kWh pack, for little over $5,000! The ES6 is the current best seller, but by mid-2020, the Model Y-like (and 100kWh battery-equipped) EC6 crossover is sure to become a big hit in the second half of the year, possibly becoming a regular face in this Top 5.

Looking at the 2020 ranking, there were some significant changes, like the climb of the GAC Aion S to the runner-up spot, while the BYD Qin Pro EV jumped three positions, to #5.


The local EV Startups are starting to get a hold on the market, not only the NIO ES6 was #5 in February, but the Weltmeister EX5 also had a good month, jumping 4 positions, to #13.


Besides the Qin Pro EV, BYD also saw its small Crossover Yuan EV climb positions, to #12, helping the Shenzhen maker to recover its leading position on the market.


Finally, we have two models returning to the Top 20, with the Chery eQ climbing to #18, while the Changan Eado EV is now #19.


More important than looking at the current numbers, is know what to expect in the next few months, right?


In March, more than 90% of the automotive factories are back in production, so while that month will still see a transition to regular activities, CPCA expects a 40% drop in March in the overall market, April and May should witness a return to normal…


A return to the growth numbers of H1 2019? Or the slow sales of the second half?


One thing is certain, this crisis will probably lead to some behavioral changes, like a possible loss of faith in public transport, which could mean a reinforcement of private vehicle ownership, and/or changing buyer tastes.


In this last case, knowing that Chinese OEMs are faster to respond to changing environments, we could see a return to form from the surviving local OEMs, especially their startups, with several exciting new models (NIO EC6, XPeng P7, Byton M-Byte…) coming soon. 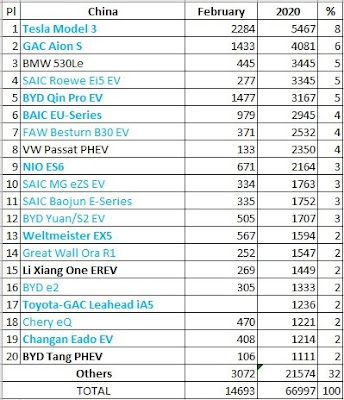