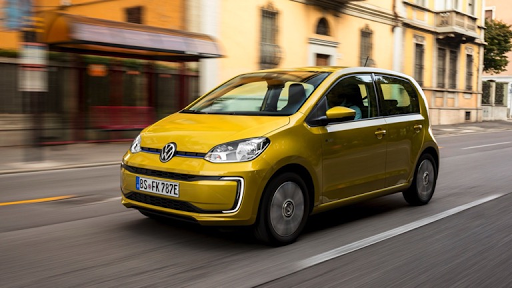 Tesla Model 3 wins in March, but Volkswagen leads the way

The German plugin market scored over 65,000 units last month, with both technologies rising fast, particularly plugin hybrids (+191% for BEVs and +278% YoY for PHEVs), with last month plugin share ending at 23% (10% BEV), pulling slightly up the yearly tally, to 22% (9.9% BEV), so this market sits firmly in The Disruption Zone.

And in a rebounding overall market (+36% YoY), petrol failed (+7% YoY) to profit from it, while diesel is helplessly in a hell hole (-5%), with its sales continuing to fall, even in the context of a recovering market. 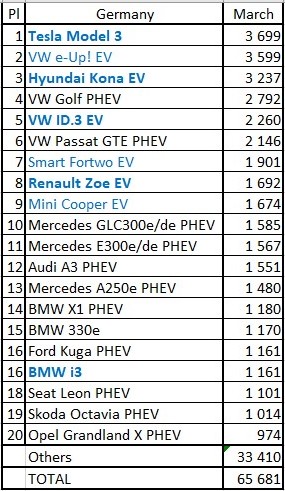 Looking at last month Best Sellers, in March we had a surprise winner, with the Tesla Model 3 beating its Volkswagen arch-rival, the... e-Up! Wait, what?!?
Yep, by registering 3,599 units in March, its second record performance in a row(!), the veteran model (VW's city car is on the market for 10 years now, and its EV version exists since 2013), not only put to shame its larger siblings, namely the #5 VW ID.3, but was close (it ended just 100 units behind) from stealing the thunder from a record-setting Tesla Model 3...
Prost for the tiny EV, which is still my favorite VW, as it is the closest we have from the original VW Beetle concept: Cheap, no-frills and reliable transportation for das Volk.
In the 3rd spot we have another surprise, with the Hyundai Kona EV returning to form, thanks to a record 3,237 registrations, banking on its competitive km range per euro score to win its first monthly podium seat since November.
Below the podium Top Sellers, the 4th place went to another record setting Volkswagen, with the new Golf PHEV winning the Best Seller award in the PHEV category, with 2,792 units, while last year Best Seller, the Renault Zoe, had to settle with an 8th spot, with the French hatchback failing to follow the pace of the Model 3 and the VW armada that followed it.
The Mini Cooper EV jumped to 9th, thanks to a record 1,674 deliveries, thus making 7 BEVs in the in the Top 9, but below it, it's a sea of PHEVs, with the only exceptions being the #16 BMW i3, which reflects one if the current market trends, while the BEV market is concentrated (almost literally) in half a dozen models, the models choice in the plugin hybrid field is far greater and spanning through much a wider type of customers and needs, leading to a more diversified market.
One example is the fact that the VW Golf PHEVs cousin models are all present in the Top 20 (Audi A3 in #12, Seat Leon PHEV in #18 and Skoda Octavia in #19), while the VW ID.3 MEB platform siblings are still either in different stages of production ramp-up (VW ID.4 and Skoda Enyaq), just being presented (Audi Q4 e-Tron) or still under wraps (Seat/Cupra El-Born), and this exercise can be replicated in a number of other OEMs, true BEV takeover of the market will only be possible when pure-electric model choice is nearly as complete as PHEV or ICE models. No one-size-fits all recipe will work, wether some people like it or not.
Outside this Top 20, a mention to the continuous ramp-up of the Fiat 500e, now at 748 units, while two other models are also ramping up their deliveries, with the Opel Mokka EV now at 526 units, while the VW Tiguan PHEV had 548 deliveries. 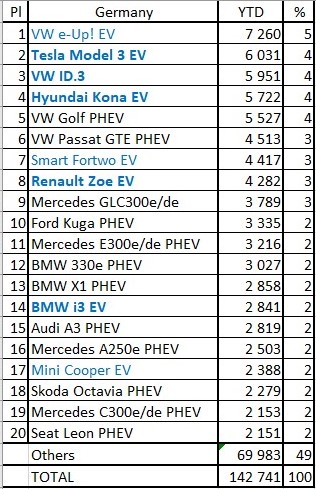 Regarding the 2021 table, we now have the tiny VW e-Up on top, with a sizeable distance (1,229 units) over the rising Tesla Model 3, relegating the previous leader, the VW ID.3, to 3rd. We were expecting more, ID.3...
Another model on the rise was the Hyundai Kona EV, up 2 spots, to 4th, while the VW Passat PHEV climbed to #6, thus making 4 VW's in the Top 6.
On the second half of the table, the Mercedes E300e/de jumped three spots, to #11, and is now the only full size model in the table.
Highlighting the good moment of the VW Group, besides the Volkswagen models in the Top 20, we should mention the Audi A3 PHEV jumping from #20 to #15 last month, all while their Czech and Spanish cousins joined the table, with the Skoda Octavia PHEV jumping to #18, and the Seat Leon PHEV to #20.
But these weren't the only new faces on the table, as the Mercedes A250e re-joined the table,in #16, while the Mini Cooper EV slalomed its way through a forest of PHEVs to end the month in #17.
In the brands ranking, Volkswagen (18%, down 1%) is clearly leading its home market, followed by Mercedes (11%, up 1%) and BMW (9%), while #4 Audi (7%, down 1%) is not too far away.
Further behind, Hyundai and Renault, both with 5% share, seem unable to threaten the grip that the local heroes have on the German plugin market.