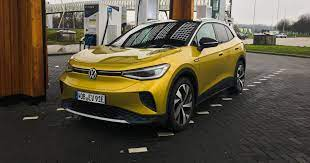 The Dutch PEV market dropped 4% in March, to 4,834 plugin registrations, but that result wasn't all that bad, considering that the overall market fell even more (-18% YoY), placing last month PEV Share at 20% (9% BEV), pushing the year to date PEV share to 15% (5.6% BEV), which is still significantly down on last year result (25%), but already on par with the 2019 score (15%).
Considering that the first quarter of the year is always the weakest, and the last the strongest, to make this a fairer comparison, it's best to compare the current share with what was going on 12 months ago, and by doing so, we can see positive results, as the market share grew by 3% YoY (15% vs 12%) in Q1, although one must say that BEVs have seen their share fall (9% a year ago vs the current 5.6%), so the market's motor of growth are actually PHEVs...
Breaking down registrations between each plugin powertrain, BEVs recovered a bit, and are now responsible for 37%, a 5% recovery, but they are far from the 75%  of 12 months ago, and even further away from the final 82% of 2020, expect pure electrics to continue recovering ground throughout the year, but one thing looks certain, with BEVs gradually losing their fiscal incentives year after year, plugin hybrids are recovering their space in the market, highlighting just how sensitive to incentives the plugin market still is.
In March, the leader was the Tesla Model 3, scoring its first win since September, this time with 341 units, relegating the previous leader Volvo XC40 PHEV to the second spot, while in 3rd we have the VW ID.4, that after a surprise landing last December (#4, with 2,408 units), has finally started its regular career, and with a podium standing, while its sibling ID.3 has failed to show in the Top 20...
Outside the podium, in the 4th place we have a surprise, with the Ford Kuga PHEV scoring its best result since last July (179 units), while in #6 we have the BMW iX3 showing up for the first time on the table, thanks to a record 159 registrations, and the veteran Nissan "Abe Simpson" Leaf is teaching the young ones a thing or two ("Now, when i was a young boy, Abraham Lincoln showed up in my dreams and...Hey! Who stole my rear bumper?!?!?"), about sales and last month had its best result this year, with 134 units.
The second half of the table also had a few surprises, like the Mercedes A250e showing up in #12, with a record 101 registrations, and two Opel's in the table, with the SUV Grandland X PHEV in #14, with a record 95 units, while the small crossover Mokka EV landed in #17, with 83 units, a promising start for the attractive Opel.
Speaking of new models, March witnessed the landing of two other nameplates that might show up on the Top 20 soon, with the Kia Sorento PHEV starting its career with 54 registrations, while the Mercedes EQA had its first 38 registrations in this market. After its older brother EQC discreet career on the market (insert short range comment), Mercedes hopes the EQA to become its volume mover on this market, where the three-pointed-star brand trails (way) behind its arch-rival BMW. Looking at the 2021 ranking, the two main candidates for the 2021 Best Seller prize have finally came out to play, with the Tesla Model 3 and Volkswagen ID.4 jumping to the 3rd and 4th positions, respectively.
Another model climbing was the Ford Kuga PHEV, that jumped four positions, to #5, while the Renault Captur PHEV joined the table, in #12.
But the momentum belonged to BEVs, besides the aforementioned Tesla Model 3 and VW ID.4, the BMW iX3 also joined the table, in #17, while there were several pure electric models climbing positions, like the Kia Niro EV (up 2 spots, to #9), Volvo XC40 EV (up to #11), or the Polestar 2 (from #18 to #15). After starting the year with just 5 representatives, BEVs now have 8 in the Top 20, and they should be the majority by June...
In the manufacturers ranking, Volvo (17%, down 1%) is firm as the Number One brand, with BMW (14%, down 1%) in the runner-up position, while a distant Volkswagen (5%, up 2%) now closes the podium, ahead of Renault and Kia, both with 4%. 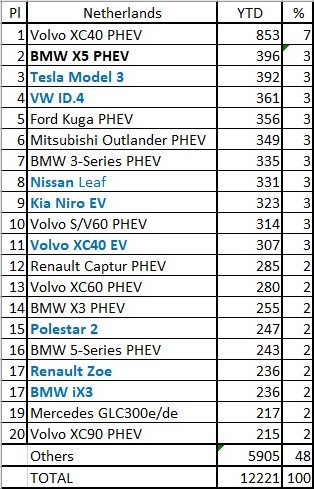