The European passenger plug-in market slowed down a bit to enjoy the holiday season, by registering some 27,000 registrations, up 30% regarding the same period last year, pulling the Year-to-date count to some 212,000 deliveries (+41% YoY), while the 2018 market share remained stable at 2.2%, which incidentally, was the same share value registered in July.


Looking at Europe’s fuel mix, diesel continues to drop significantly, now having 38% of the total market, its lowest share since 2001, while all other fuels (including CNG, LPG…) are on the rise, profiting from the diesel-fleeing stampede, at this pace, new registrations of diesel-powered vehicles could be virtually dead by 2024-25…


July is usually the start of the holiday season in Europe, with most models slowing down sales during the Summer months, then returning with a bang in September, but it seems the folks at Nissan haven’t got the memo, with the Nissan Leaf scoring in July its best result since March, with over 4,000 deliveries, allowing it to distance itself from its French cousin Renault Zoe.

#1 Nissan Leaf – Europe’s Best Selling PEV model continues to expand its sales, by registering 4,024 units in July, tripling the result of last year, and with the orders list still to be satisfied in a number of countries, expect the Leaf to continue to be the default #1 throughout the year. But back at July’s performance, the main markets were Norway (980 deliveries), France (492), Italy (389 units!) and Ireland (305 units!!! All-time record for a plug-in in this market).

#2 Renault Zoe – July’s 1,901 deliveries meant a 13% drop YoY for the French hatchback, being the second consecutive sales drop. Is the competitively priced Leaf eating into its Renault cousin sales? With the automaker promising a production increase in a couple of months, I smell a significant price cut on the Zoe soon...Anyways, regarding July’s individual market performances, the domestic market did the usual heavy lifting, by registering 721 units (-18% YoY), with other significant numbers coming from Germany (320 units), Sweden (126, new record) and Spain

#3 BMW i3 – The German Hot Hatch sales increased (+17% YoY) in July, with 1,685 units being delivered, and with the Leipzig factory expected to grow output towards the end of the year, thanks to the upcoming 44kWh version, do not expect the Bavarian carmaker to be worried with its quirky looking hatchback sales performance. Looking at individual countries, Germany (422 units, 314 of them being BEV) was the largest market for the i3, with Norway (284), and the UK (250) rounding the i3’s Top 3 markets.

#4 Volkswagen e-Golf – The favorite BEV for people who want to keep EV-ownership a secret, the inconspicuous e-Golf had 1,379 registrations, with Norway being once again the backbone of the German hatchback demand, with 413 registrations, followed by Germany (311 units), The Netherlands (182 units, best result since January), and Austria (120). With Volkswagen now focusing in developing and getting to the market the production version of the ID concept car, do not expect this model to bother too much the current Best Sellers in the foreseeable future.

#5 BMW 225xe Active Tourer – The MPV deliveries grew 55% in Europe last month, with 1,294 deliveries, becoming July’s Best-Selling PHEV, a first for the BMW model. Although impressive, this result had help from the momentary sales slump of the Mitsubishi Outlander PHEV, due to having the first units of the revised version delivered in August. Nevertheless, it is a surprising result for the short range (+/- 30 kms / 18 mi) PHEV, especially when using the currently-not-sexy MPV body, which highlights the current lack of compact, family-friendly plug-ins in Europe, proof of this is the fact that in the current Top 20, only BMW’s Active Tourer and the Kia Niro PHEV fall in that category.


Looking at the 2018 ranking, the top positions remained the same, with the headlining news being the VW Passat GTE returning to #6, while the Kia Niro PHEV jumped three positions to #10, thanks to a record 1,179 deliveries, allowing it to be #6 in the July ranking. With a low price (34,500€), usable range (42 kms/26 mi EPA) and practical space, the Korean Crossover could be a star on the rise in Europe.


Another change in the Top 20 was the BMW 225xe Active Tourer climbing two positions to #15, repeating what it had already did in June, allowing the German MPV to jump four positions in just two months. Who said MPVs were going out of fashion, eh? Now imagine if the BMW family-friendly model had a decent battery (Currently has 7.6 kWh, 5.8 kWh usable) and range…


While July hasn’t brought many memorable performances, outside the Top 20 there was plenty to talk about, following on the Kia Niro PHEV record performance, its Hyundai cousin, the Ioniq PHEV, registered a personal best result of 575 units, which could mean that the Hyundai-Kia Group is finally getting more battery supply from their providers. And they will surely need it, once the Kona and Niro BEVs are in full production, the Korean Group will need Gigafactories (actual unit of measurement) of batteries…


But the market focus is currently in other segments, with none other than three recent Premium SUVs hitting record performances, with the Land Rover Range Rover Sport PHEV, besides winning the prize for longest nameplate name, also scored a best ever result of 410 units, while its cousin Jaguar i-Pace registered 199 units, preparing itself to hit full speed by September.


But the Rookie Of The Month was the new Porsche Cayenne PHEV, that in its first full deliveries month has already hit 688 units, not only the nameplate best result ever, but has also immediately outsold its Panamera PHEV sibling. While the Sports Sedan currently holds the all-time high score for a Porsche model (824 units, set last March), it shouldn’t take long for the SUV to break that record, possibly being the first Porsche to go North of 1,000 units/month.


Now imagine how high can the future Taycan go…Better yet, imagine a BEV Macan! 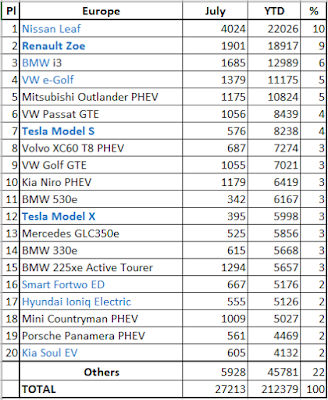