Looking at the Q1 2021 sales by Automotive Group, we have: 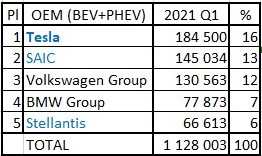 If we gather plugin sales by Automotive Groups, Tesla ended the first quarter of the year in the lead, with 16% share, 3% less than a year ago, which nevertheless is still a small feat all by itself, considering the intensive diversification process that the EV world is now having, 16% is still significant.
Tesla's current domination is however being threatened by the Volkswagen Group the rise and rise of SAIC, that jumped from #9 in Q1 2020, to the current 2nd spot, with its share jumping from 4% a year ago, to the current 13%.
Although most of this growth has to do with the Wuling Mini EV success story, the truth is that SAIC itself is also benefiting from the export efforts made through MG (it is the only Chinese EV brand that sells in volume outside its home country), with leading roles in the EV movement in diverse geographies, from Latin America to Australia, passing by Israel and other Middle Eastern markets, and as these EV markets grow, so too will MG  (and SAIC).
Although being surpassed by SAIC, the Volkswagen Group reduced its distance to the leader from 6% (19% vs 13% in Q1 2020), to the current 4% (16% vs 12%), so not all is lost for the German conglomerate, in its goal to discuss the global leadership, but what has changed in the last 12 months is that Tesla doesn't have just one competitor (VW Group) trying to catch it, but two (VWG and SAIC).
Will this mean that Tesla will lose the 2021 title? Despite an expected strong second half of the year for the VW Group, I believe Tesla will still end the year in the lead, but for 2022...All bets are on.
The BMW Group ended the first quarter of the year in the 4th place, improving on the #5 of 2020, benefiting from the implosion of the Renault-Nissan Alliance (a year ago, the Alliance had 11% share, now it has 5%...) and the popularity of its PHEV lineup.
We now have a new face on this Top 5, with Stellantis rising to 5th, with 6% share, thanks to an extensive lineup, spreaded through its 205 brands, and with the #4 BMW Group just 11.000 units ahead, we could see it run for the 4th spot soon.
Regarding the Q1 2020 ranking, we witness the disappearance of the Hyundai-Kia Group, that has seen its share drop by half, from 8% a year ago, to the current 4%, so those Hyundai Ioniq 5 and Kia EV6 are badly needed to change the fortunes of the Korean group.
BEV 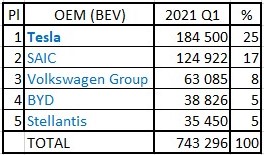 Looking only at BEVs, Tesla is comfortable in the lead, with 25% share, but has lost 4% share regarding the same period of last year, but the fact that 1 in 4 BEVs sold in the World belongs to Tesla is a feat in itself, considering the current diversification process.
The Silver medal is in the hands of the 2020 Silver medalist, SAIC, with the Chinese maker jumping its share by 6%, to the current 17%, not only leaving the 3rd placed Volkswagen Group in the dust (they ended 2020 separated by just 16.000 units), but they are now starting to see Tesla's rear more clearly.

The self-registering stunt of late last year by the Volkswagen Group is now having its payback, with the first two months of the year being registration low points, with March helping it to recover a bit, but it wasn't enough to recover the 11% share that the German conglomerate had both in Q1 2020 and by the end of last year.
Will we see it recover significantly in Q2?
Just outside the podium we have BYD, with 5% share, with the Chinese carmaker rising one spot regarding 2020, not because it has increased its share (it was actually down from 6% to the current 5%), but because of the Renault-Nissan implosion, with the Alliance now having 4% share, a far cry from the 13%(!) it had 12 months ago...
Like in the PHEV+BEV ranking, Stellantis shows up in the Top 5 BEV ranking for the first time, in 5th, with 5% share, but despite being just 3.000 units behind the #4 BYD, do not expect it to surpass the Chinese maker anytime soon, as BYD is now set to increase deliveries significantly, now that all its BEV lineup has transitioned to the new LFP batteries.
Comparing with the BEV+PHEV table, the big defeated is the BMW Group, that due to its heavy reliance on PHEVs, it disappears from the Top 5, being replaced by the more BEV-friendly BYD.
Published by José Pontes at May 03, 2021