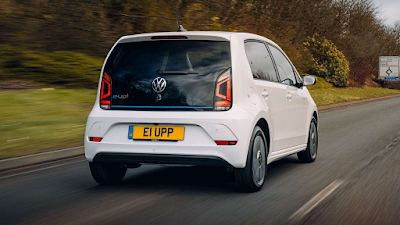 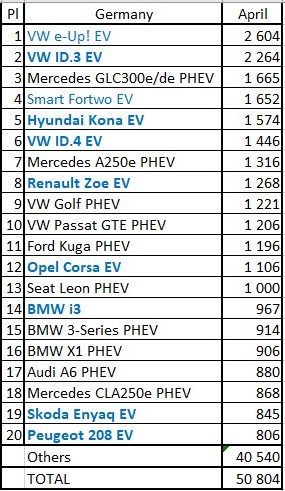 Looking at last month Best Sellers, Volkswagen leads the way, with a 1-2 win, with the ID.4 e-Up and ID.3 taking the top spots, with the little e-Up earning its third win in a row, a surprising performance for the veteran model, that was supposed to have a limited shelf life, but due to an unexpected turn of events (the ID.3 is not selling as well as expected...), it is now VW's bread and butter in its home market. Now, if they only could sell them at a profit...
In the 3rd spot we have a(nother) surprise, with the Mercedes GLC PHEV jumping to the 3rd spot, becoming last month's best selling PHEV, 300 units ahead of its stablemate Mercedes A250e and over 400 above the VW Golf PHEV. Is the Three-pointed-star SUV getting ready to run with the VW hatchback for the title of most popular plugin hybrid?
Below the podium, the 4th place went the Smart Fortwo EV, that despite its wrinkles, is still selling in large numbers, staying ahead of models like the Hyundai Kona EV (April's Best Selling foreigner) and the recent VW ID.4, that jumped last month to #6, thanks to (a still disappointing) 1,446 units.
Interestingly, on the Top 8 models, only two are PHEVs, which would lead to think that BEVs outsold plugin hybrids, but actually that wasn't the case, as PHEVs represented 53% of plugin registrations in April. Once again, the reason is the wider choice among PHEVs, while on the pure electric side, sales are more concentrated in a limited number of models.
On the second half of the table, a reference to the Opel Corsa EV jumping to #12, while its Stellantis platform partner, the Peugeot 208 EV, joined the table, in #20, thanks to a record 806 deliveries, a small feat for the French brand, that seems to benefit from the sales slowdown of the Renault Zoe.
But the highlight on the last places of the table was the Skoda Enyaq, landing straight into the 19th spot, with 845 deliveries, a promising sign for the Czech EV, that should reach the top half of the table in the months to come.
Outside this Top 20, a mention to another MEB-based model, with the Audi Q4 e-tron delivering its first 130 units, while still on the VW Group galaxy, the sporty crossover Cupra Formentor PHEV continues to ramp up production, with April signaling a record 443 registrations.
Oh, and a final note to the first Toyota BEV deliveries in Germany...No, it's not yet the bZ4X (why, oh why, didn't they made a simpler codename?), but the Proace Verso EV, a Toyota badge-engineered version of the Stellantis Group midsize van-with-windows, known elsewhere as Citroen e-Spacetourer, Peugeot e-Traveller or Opel Zafira Life EV...Well, "they had to start somewhere, so they started...there" .
Let's hope these are the first of many, and Toyota doesn't take forever to create a full line up of EVs, and not just what they can buy from Stellantis. (Toyota buying technology from Stellantis...Makes you wonder, doesn't it?) 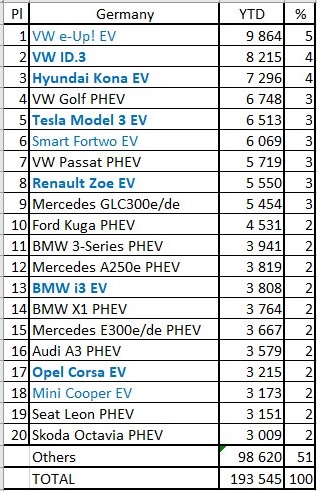 Regarding the 2021 table, the small VW e-Up gained significant ground over the competition, so the little EV is currently the favorite for the Best Seller ceptre (assuming VW doesn't limit production...), while behind it, the VW ID.3, Hyundai Kona EV and VW Golf PHEV all benefited from the off month of the Tesla Model 3 and climbed a position each, which they will likely lose again in the next couple of months.
Another model on the rise was the Smart Fortwo EV, climbing to 6th, at the expense of the VW Passat PHEV down to 7th.
On the second half of the table, there's more to talk about, BMW had a good month, with the midsize 3-Series PHEV and the small i3 both going up one spot, to #11 and #13, respectively.
But the Climber of the Month was the Mercedes A250e, jumping 4 positions to #12, and the compact Mercedes might reach a Top 10 position soon.
The Opel Corsa EV is back again at the table, now in #17, and the BEV team should increase in the next couple of months, as the VW ID.4 and the Peugeot 208 EV are less than 300 units from the #20 Skoda Octavia PHEV.
In the brands ranking, Volkswagen (18%) is clearly leading its home market, followed by Mercedes (10%, down 1%) and BMW (9%), while #4 Audi (7%) is not too far away.
Further behind, Hyundai and Renault, both with 5% share, seem unable to threaten the grip that the local heroes have on the German plugin market.
Published by José Pontes at May 20, 2021