Plugins are a hot item in China, having scored over 175,000 units last month, jumping 173% regarding the same month last year, with BEVs in particular growing an amazing 204% rate.

April was the second month in a row that the plugin share reached the two-digits mark, by hitting 10% (8.2% BEV), keeping the 2021 share at 10% (8.1% BEV), and considering that Q1 is usually China's weakest quarter, we can now safely assume that the local plugin market share will end North of the two-digits mark this year, and the total tally of the year will exceed 2 million deliveries!

Looking at April's Best Sellers, the biggest news is the 4th spot of the Li Xiang One, with the full size SUV ending just 207 units the #3 BYD Han EV, something that would be a first for the startup maker.

With 29,251 units last month, the tiny four seater continues on a roll, allowing it to keep the 3rd spot in the overall market, if the little Wuling continues to go at this pace, a half a million score by the end of the year seems not only feasible, but likely. The Wuling EV is becoming a disruptive force in urban mobility, a true EV for the masses, with the added bonus that the people buying it (mostly females, mostly under 35 year olds) are usually a hard to capture audience. This EV is becoming a game changer, but like in every success story, one wonders what will happen when others start to play in this field...

The poster child for electric mobility had just 6,264 units last month, but fear not, considering that part of the MiC Model 3 production is now being exported to Europe and the Asia-Pacific region, we should start to see it behave in China like it does elsewhere, meaning poor starts of the quarter, so-so mid quarter months and then an end-of-quarter peak, replicating the behavior of the US-made Model 3. Something we will no doubt have the opportunity to check in the next couple of quarters...

#3 – BYD Han EV
The successful career of BYD’s luxury sedan in China has seem to hit cruise speed, by delivering 5,746 units in April, but it was still enough to earn it its first podium presence since last January. The current poster-boy for BYD is expected to continue going at 5-7,000 units/month in the foreseeable future, looking to keep the full size category leadership from the wheels of the...

...Big SUV from Li Xiang. A sort of Dark Horse among the whole Chinese EV  Startup buzz, the little talked about EREV has already delivered over 55,000 units in just 17 months, an amazing performance, especially when we consider that this is a huge 5-meter, 7-seater, full-size SUV. Using an original strategy when it comes to powertrain, being one of the few Extended Range Electric Vehicles on the market, it adds to the 41 kWh battery with fast-charging capabilities, a 1.2 liter gasoline engine that works as a range enxtender. With production (and demand?) now in cruise speed, one wonders when will this EV startup launch its 2nd album model, after all, their counterparts in the movement (NIO, Xpeng, etc) are already on their 2nd, or even 3rd, new model...

Tesla's new baby had only 5,407 units last month, and while at first sight it looks like a disappointing result, this is mostly explained by the 2 week shut down in April, expect it to recover soon and maybe resume the records streak by June. Tesla’s midsize crossover future cruise speed in China is a question mark, while traditionally SUVs/Crossovers haven't sold as much as their sedan counterparts, the truth is that the market is leaning towards higher riding bodies, so the Model Y could surf the wave and outsell the Model 3 by some margin. 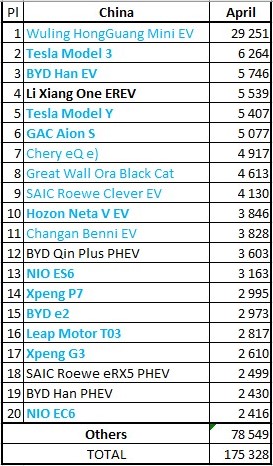 Looking at the remaining Best Sellers table in April, a mention to the rise and rise of the #10 Hozon Neta V, a small crossover from Hozon that has delivered 3,846 units last month, the 2nd record performance in a row for the EV startup model, so we might be witnessing the build up of another star in the Chinese EV startup sky.

Another model with surging sales is the new BYD Qin Plus PHEV, 12th last month with a record 3,603 units, its third record score in a row, so it means that the new midsize BYD is still in production ramp up, with the Shenzhen maker hoping to replicate the Han success in the category below.

Local startups continue to shine, besides the aforementioned Hozon Neta V, in total we had 7 representatives from 6 different startups in the table, with the highest placed being the #4 Li Xiang One.

Below the Top 20, a reference to the landing of the GAC Aion Y, with a great 2,000 units score, so the compact MPV (Yeay! MPVs rule!), seems to have started off its career on the right foot, after one failure (Aion LX) and one meh! launch (Aion V), this is an important model for GAC, that has been solely living off the success of the Aion S for years and it desperatly needs more successful metal for the company to grow and avoid the one trick pony moniker. 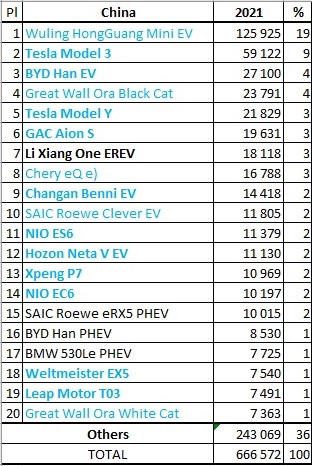 Looking at the 2021 ranking, the top positions all remained the same, with the Wuling Mini EV as the undisputed leader, with the runner-up Tesla Model 3 also comfortable, so unless something unexpected occurs, the top two positions are already taken for

Below it, the Tesla Model Y got a little bit closer from the #4 Great Wall Ora Black Cat, that had an off month in April, with Tesla's SUV set to surpass the small Cat in the next couple of months.

The first position change happened in #10, with SAIC's small Clever EV jumping three spots into the top half of the table, while in #12 we have the Hozon Neta V, that also jumped 3 positions, and we should see it climb even higher, given the current records streak that the small crossover is experiencing.

The BYD Han PHEV is also experiencing a success of its own, having climbed to #16 last month, while another EV startup model has joined the Top 20, with the small Leap Motor T03 jumping to #19, being the 7th EV startup model in this Top 20.

Just outside the Top 20, we have two models on the rise, with the #21 Xpeng G3 just 70 units behind the #20 Ora White Cat, so the crossover might already join the table next month, while the BYD Qin Plus PHEV is some 800 units below the Top 20, and given its current production ramp up process, it wouldn't be that surprising if it joined the table already in May.

Interestingly, the all-mighty Volkswagen Group, owner of 16% of the overall Chinese passenger car market, currently has only 5% of the plugin market, a number that pales next to the 27% share of the SAIC Group, or even the 12% that both BYD and Tesla have, so a lot needs to be done, if they still want to keep their grip on the market in the long term.