After a couple of slow performances in previous months, in November the European passenger plug-in market is back at cruise speed (+31% YoY), by registering some 37,500 registrations, pulling the Year-to-date count to 345,000 deliveries (+34%), while the 2018 market share grew to 2.4%, thanks to a 3.2% performance in November.


But if on the surface everything seems to back to normal, separating the BEV/PHEV powertrains, there are seismic changes, on the BEV side, sales (or should I say, deliveries?) jumped 96% YoY, the highest growth rate since July ’14 (!), to a record 23,000 units (61% share of plugins), allowing them to (finally!) surpass PHEVs in the total year breakdown, something that happens for the first time since 2014…Historic month, indeed!

On the other hand, PHEVs continue feeling the sting of the new WLTP standard, with sales down (-14% in November) for the third time in a row, the worst downward trend since…well, ever. Will PHEVs in Europe recover sometime in the future, or are they going to be swallowed by the upcoming BEV flood?

One thing is certain, BEVs start 2019 with the upper hand…


In November the top spots didn’t had major surprises, with three (i3, e-Golf and Zoe) of the Top 5 Best Sellers last month hitting record performances, while the Outlander PHEV had its best month since 2015, and the leader Nissan Leaf hasn’t made a memorable score, simply because the Leaf output in the Sunderland factory is limited by the weight of the Qashqai production there. Maybe Nissan should think about sending units from the US to Europe?

#1 Renault Zoe – The record 5,154 deliveries meant a 175% jump YoY for the French hatchback, this surprising score is the result of LG providing more batteries to the French carmaker, thanks to the ramp up of its European factory. Without the batteries bottleneck, we should finally see the real demand for the Zoe. Regarding individual market performances, the domestic market did the usual heavy lifting, by registering 1,895 units (+144% YoY), with other significant numbers coming from Germany (1,047 units, new record), Norway (464, new record), and also Portugal (279 units…and guess what, also new record), so the Zoe is one of the hottest EVs right now.

#2 Nissan Leaf – Despite being surpassed in November by its French cousin Renault Zoe, the Nissan Leaf, Europe’s Best Selling EV, continues to expand its sales, by registering 4,640 units, the third month in a row that the Japanese hatchback hits a 4,000-plus performance, and with the orders list still a couple of months away from be satisfied, expect the Leaf to end the year as the Best Selling EV in Europe, recovering a title that had won for the last time in 2013... But back at last month performance, with the main market being by far Norway (1,209 deliveries), the Japanese hatchback hit three-digit performances in 12(!) other countries, besides the usual suspects (France, Netherlands, Germany, UK…) the BEV also shined in countries like Sweden (388 units, new record), Belgium (235, new record), or Spain (182 units, and…yes, new record).

#3 Mitsubishi Outlander PHEV – Europe’s favorite family/towing/winter plugin continues to profit from the specs update, with the Japanese SUV securing yet another Best-Selling PHEV of the Month award and a podium presence in October, thanks to 3,160 registrations, up 77%, being the nameplate highest score since 2015. The plug-in SUV will continue to offer its unique mix of “affordable” space, AWD and utility, with the added bonus of a larger electric range (28 mi/45 kms real world range) and more power (+15 hp) at hand, keeping it popular in markets like the UK, Norway or Sweden. Going forward, with the end of the PHEV incentives in the UK, a market that represents one third of sales, it will be interesting to see where Mitsubishi will find other markets to compensate the UK losses. With a record 386 units registered last month in Germany, I think Mitsu might have found the answer…

#4 VW e-Golf – It seems the German hatchback is cured from its not-enough-batteries disease, just in time to save VW from their PHEV extinction, allowing it a Top 5 presence, thanks to 3,044 deliveries, the nameplate’s second record in a row. And to think the model is less than a year away from being replaced…Looking at individual countries, Norway (886 units) and Germany (858 units, new record) were major contributors, with The Netherlands (358) and Austria (318) also helping significantly. Looking ahead, expect deliveries to continue strong in the next few months (I mean, with PHEVs offline, they don’t have anything else to make, right?), until VW finally decides to place it in Sunset-mode, in the second half of 2019, as it prepares the ID/Neo launch.

#5 BMW i3 – In a transitional month, with the start of the new 42 kWh deliveries, the German Hot Hatch sales hit a record month, with 2,443 units being delivered, and with the Leipzig factory growing in output, the BMW EV is set to continue breaking records throughout 2019. Looking at last month individual countries, Norway was the largest market for the BMW hot hatch, with 714 registrations (Best month since 2016), with Germany (432 units, 360 of them BEV) following it.

BEVs on the rise


Elsewhere, another model from the BMW Group continues to jump positions, with the Mini Countryman PHEV reaching #12, while three BEVs are shining in the second half of the table, with the Hyundai Ioniq Electric beating for the second time in a row its personal best, with 1,115 deliveries, while the Smart Fortwo ED climbed to #16 and even the runout-mode Kia Soul EV was up to #19.


Outside the Top 20, the Jaguar Land Rover team had a great month, with the Jaguar i-Pace scoring another record month (1,260 units), while the Range Rover/Range Rover Sport PHEVs together registered some 1,200 units.


Intriguingly, the Hyundai Kona EV still hasn’t made the expect deliveries jump, with only 620 units being delivered in November, which is strange, given the recent deliveries uptake of the Ionic Electric. 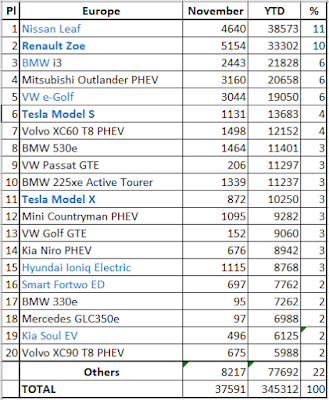