With the overall French market grounded to a halt (-89%) due to the Coronavírus lockdown, plugins were down just 66%, with BEVs faring slightly better, at -62%, allowing them to have 74% of the plugin market last month, better than this year average (73%).

One should consider that the strict lockdown heavily disrupted registrations, with only units ordered before the lockdown being allowed to be registered, in home delivery mode, so most of these deliveries have more to do with OEM skills to solve logistic issues, than actual demand, the first demand-driven month could happen in July, as May will still be impacted by lockdown, and June will be a transitional month, although considering that July and August are slow months, due to the summer holidays, we might only see a strong month again in September...

When one looks at last month Best Sellers, one realizes the size of the disruption, with the Renault Zoe losing the monthly Best Seller title for the first time in 7 (seven) years!

Yep, the Peugeot 208 EV managed to beat the Zoe by 360 vs 322 units, next month the Renault hatchback should return to its natural spot, but still, this was a welcome change from the usual monotony at the top and could empower Peugeot to dare dream higher and run the 208 EV head to head with the Renault EV.

The Tesla Model 3 was once again the only foreigner in this Top 5, with 189 deliveries, followed by the DS 7 PHEV and its Peugeot cousin, the successful 3008 PHEV.

Last month surprise was the Citroen C-Zero reaching #6, with 89 registrations, although this performance had possibly due to some fleet deal (French Government? Hospitals?), allowing them to dispatch units they probably had in some forgotten are of the deliveries parking lot, allowing them to free space for faster selling models.

Looking at the 2020 ranking, nothing significant happened, with all models maintaining their standings, so its best to take the time to see how things will develop from here on.

On the Top 20, the podium positions are pretty much decided, with the Zoe taking Gold, the 208 EV earning Silver, and the Model 3 running away with Bronze.

The Best Selling PHEV and SUV trophies are going to be decided between the DS 7 and Peugeot 3008, and if right now the upmarket DS is ahead, i believe the Peugeot will end up having more stamina to keep the pace, winning both titles.

If the Tesla Model 3 is without shadow of a doubt the Best Selling foreigner, the second best is still pretty much out on the open, with the Kia Niro EV, Hyundai Kona EV and Nissan Leaf running for it, although it's not out of the realm of possibilities that the upcoming VW ID.3 could beat all of them to the ground.

The Best Selling Luxury PEV should be fought between the Porsche Cayenne PHEV and BMW X5 PHEV, with the second running from behind and hoping to shorten the distance in the next few months.

Finally, as future new entries to the Top 20, the Opel Corsa EV and Mini Cooper EV are strong possibilities, being joined later in the year by the VW ID.3, while on the PHEV side, the Ford Kuga PHEV could also join the Top 20 in the coming months, while the Citroen C5 Aircross PHEV is dead certain to join the table soon.

In the brands ranking, the leader Renault (28%, down 1%) is declining (the upcoming Captur PHEV, Megane PHEV and Twingo EV are badly needed), with Peugeot (24%) firm in the 2nd spot, while DS (9%) hangs to the 3rd spot, resisting to Tesla's (9%) advances. 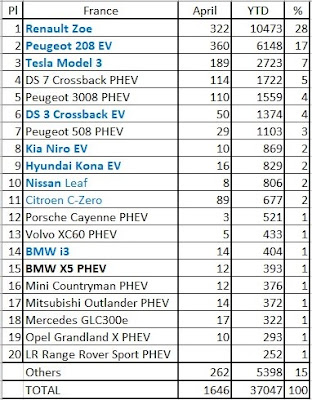