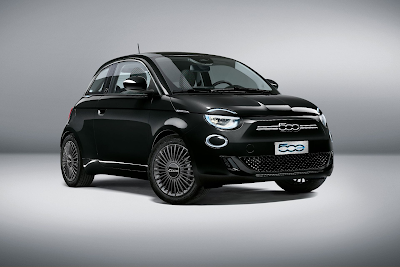 If the overall automotive market has seen its blues highlighted (-27% in November) by the recent Covid resurgence, plugin sales continue steaming hot (+204%!), with PHEVs (up 291%, to 9,144 units) growing faster than BEVs (+200%, to 9,601 units), allowing them to have a 49% share among plugins, another impressive result in this traditionally BEV-friendly market, and above the 40% share they have in the whole year.
These disruptive numbers are also reflecting on the plugin share, as last month it reached 15% (8% BEV), pulling the YTD share to 10% (6,2% BEV), a far cry from the 3,1% from 12 months ago.
Interestingly, the market disruption is also benefiting HEVs, as they reached 12% share last month, well above the 5% of last year, so we had 27% of the total sales coming from electrified models last November, a new high, while petrol lost 14% share in 12 months, from the 56% of November '19, to the current 42%, while diesel lost just 3% share, to the current 31%.
With the 2020 plugin share now reaching two-digit scores on a regular basis, expect this market to be disrupted further next year. 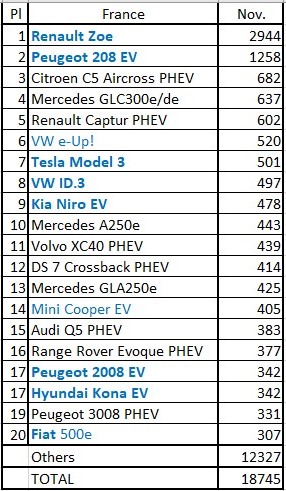 Looking at last month Best Sellers, the top 2 were the usual local heroes, but below them, the PHEV race was close, with the Mercedes GLC300e/de getting in between the two local major players, with the Mercedes SUV losing to the Citroen C5 Aircross PHEV the monthly category title by just 45 units.
Funny enough, after a record result in October (1,693 units!), the Renault Captur PHEV deliveries dropped 64% month-on-month, to the 602 of November. A simple allocation issue, or was October an exception due to the waiting list clearance?

On the remaining Top 10, the VW e-Up has beaten all expectations, by coming out of nowhere to #6, with a record 520 registrations, beating not only the #7 Tesla Model 3, but also the #8 VW ID.3...That seems to be stuck in 500-something performances in this market. Has the new German EV already found its (slowish) cruise speed?
Regarding the Californian, the 501 deliveries of November are its 2nd best score ever in an off-peak month, so we might see it score a record result in December...Say...1,500 units?
In 10th, we have the Mercedes A250e, that scored a best ever score of 443 units, and that wasn't the only Mercedes to hit record results, as the aforementioned GLC300e/de score  of 637 was also a record, just like the #13 Mercedes GLA250e (425 units).
The German maker is busy ramping up deliveries of its extensive PHEV lineup, with 3 other models hitting relevant (and record) performances last month: the GLE350de scored 167 units, the CLA250e sporty sedan had 127 units, while the new B250e MPV is already at 101 deliveries.
It took them a while to get their show on the road, but the fact is that Mercedes is now well ahead of its arch-rival BMW, that had their only decent performances coming from Mini, with the Cooper EV scoring 405 deliveries, while the Best Selling BMW was the X1 PHEV, that had 284 registrations, while its slightly more expensive, slightly less roomy and (much) uglier sibling BMW X2 PHEV was the only good surprise coming from the Munich maker, as it delivered a record 147 units in November.
On the lower half of the Top 20, a reference to the 377 deliveries of the Range Rover PHEV in its first full sales month, while its less fancier sibling Land Rover Discovery Sport PHEV also score a three digit score in its first full sales month, in this case, 101 units.
But the most important fresh model was undoubtedly the #20 FIAT 500e, that registered its first 307 units in France, while it is an impressive landing per se, this is also an important landmark for the city car category, because it means that the leader of the segment is now going EV, so expect it to become to the city car crew what the Renault Zoe is to the category above (and what the VW ID.3 wants to be in the compact segment).
Outside this Top 20, a reference to the landing of the Suzuki Across PHEV (aka, rebadged Toyota RAV4 PHEV), with a relevant 103 units (and much needed for EU's CO2 compliance...), while Citroen had the e-C4 EV hatchback score its first three-digit performance, with 101 deliveries, as it prepares the model to become its star player for 2021. 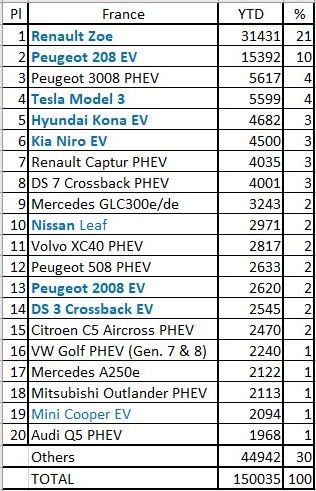 Looking at the 2020 ranking, while the top 2 remain unattainable, the last position of the podium should change hands in December, with the #3 Peugeot 3008 PHEV now only 18 units ahead of the #4 Tesla Model 3, while below them, the rising Kia Niro EV is closing in on the #5 Hyundai Kona EV, so the 182 units of advance of its Korean cousin might not be enough from preventing the Kia EV to end the year in 5th.
The highest position change was the Renault Captur PHEV climbing to #7, while below it, the Mercedes GLC300e/de was also up, in this case, to #9.
On the second half of the table, we have the Volvo XC40 PHEV climbing two spots, to #11, while below it, we have two PSA SUVs on the rise, with the Peugeot 2008 EV climbing to #13, while the Citroen C5 Aircross PHEV jumped to #15.
The well rounded Mercedes A250e jumped two positions, to #17, and could climb a couple more positions in the last month of the year.
Finally, in #20, we now have the Audi Q5 PHEV, but Audi's SUV position will be hard to secure, as both the Opel Corsa EV and VW e-Up are less than 100 units behind and could steal the last position in the table next month, and lest's not forget the VW ID.3, that also has a shot at joining the table in December.
Looking at the brands ranking, the leader is, as always, Renault (25%, down 1%), with the runner-up Peugeot (19%) at a safe distance, while the last place in the podium is being disputed by a long list of brands, currently in the hand of Mercedes (5%).
Published by José Pontes at December 14, 2020