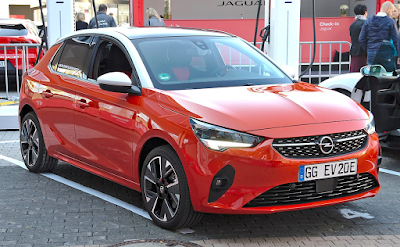 The German automotive market has opened wide open the flood gates to plugin vehicles, November was yet another record month and this time with a 24% increase over the previous record, set in October. With a little less than 60,000 units, PEVs scored an amazing 21% share (10% BEV) in the overall market, and it were BEVs to drive the market forward, up 553%(!), to 28,965 units, helping plugins as a whole jump an amazing 456% last month, we are witnessing disruptive numbers, that the yearly tally hasn't really absorbed, as it is only at 12% (5.8% BEV), so expect 2021 to be the real witness of the current disruption, with plugin share above 20% for plugins and BEVs hovering above 10%.

And this is happening in a (sort of) stable market (-3% YoY), so this can't be blamed on the Covid pandemic, it's just the market forces working... 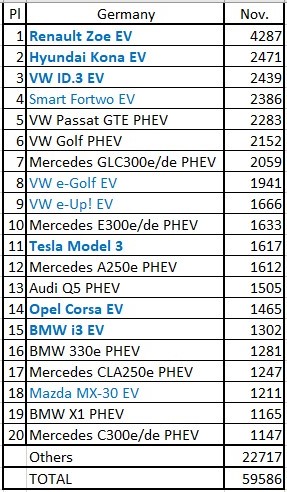 Looking at last month Best Sellers, in November the Renault Zoe reigned supreme, beating once again the VW ID.3, that was even relegated to the 3rd spot by the Hyundai Kona EV, that is just going from strength to strength, scoring another record result, now of 2,471 units.
While we expected more from the new Volkswagen hatchback, in its defence, we could say that it has some pretty fierce competition in-house, starting with the new Golf VIII PHEV, that despite having just landed a couple of months ago, it is already #6, with 2,152 deliveries, while the ID.3 predecessor, the e-Golf, seems to be refusing to go into greener pastures, having registered 1,941 units last month, only 498 less than VW's new baby.
So, looking at the bright side, if we count all these 3 models together, we get 6,532 registrations, which is well above the tally of the leader Zoe. In another positive story for the German maker, Volkswagen has placed 5 models in the Best Selling Top 9 of November, 3 of of them (e-Up, Golf PHEV, Passat GTE) with record scores!
Other relevant performances regard the Smart Fortwo EV, that scored a record 2,386 deliveries, highlighting another great month for the Daimler Group, not only the other Smart model, the Forfour EV, had also a record performance (632 units), but Mercedes placed 5 models in last month Top 20, two of them with record scores (GLC300e/de and CLA250e), while below the Top 20, the three-pointed-star maker had 5 other models (B250, GLA250e, EQC, GLE350e/de, EQV) hitting record performances...Now, that what i call a production ramp up!
In such a high volume month, record scores were plenty, with more than half of the models on this Top 20 table having best ever performances, besides the aforementioned, we should highlight the record 1,465 deliveries of the Opel Corsa EV (It looks like Opel, a brand that many had classified as a "has been", in sports terms, has returned to form under PSA, now starting to justify the investiment that the French Group has made in them), the Mazda MX-30 showed up on the Top 20, thanks to a record 1,211 units (a result of true demand or is it a CO2-compliance thing?), while all the BMW's on the table scored record scores, if the 330e and X1 PHEV performances were expected, as the first now profits from the Touring (aka station wagon) body, and the second is a fresh model, the i3 record is a welcome surprise, proving that even veterans are benefiting from the tailwind of the current plugin fever. Hell, even the Nissan Leaf had a record score (503 units)!
Outside this Top 20, we had other relevant performances, like the record 571 units of the Peugeot 208 EV (well, next to the 4,287 of its Zoe arch-rival, it does look kind of lame, but moving on...), .or the 565 deliveries of the Porsche Taycan, while on the other tip of the Volkswagen Group, the SEAT e-Mii EV also had a record 538 registrations, that added to the 592 Skoda Citigo EV and the 1,666 of the VW e-Up, we end up with 2,796 units from the VW Group city triplets, which is a new record for the Bratislava electric siblings in Germany. 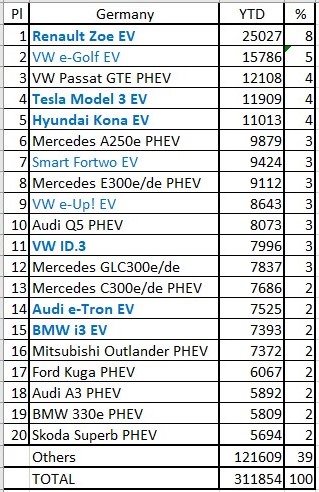 Regarding the 2020 table, the podium positions remained the same, if the leader Zoe is now preparing the Best Seller award party, below it, the Silver medal is still up for grabs, as the VW Passat GTE surpassed the Tesla Model 3 and is the new runner-up, but with just 199 units separating both and the expected high tide of the sports sedan in December, the German model will need to step up its game further, if it wants to keep Silver.
The next position change happened in #7, with the Smart Fortwo EV rising one spot, with the tiny two seater now sandwiched between two Mercedes, the #6 A250e compact and the #8 E300e/de full size model.
Speaking of Mercedes, the three-pointed-star maker one model jumping in the table, with the GLC300e/de going up 4 positions, to #12, immediately above its lower riding counterpart, the C300e/de, that was down to #13. A telling tale of the current SUV fever and another indication of the future success of the Tesla Model Y...
But the Climber of the Month was the VW ID.3, that was catapulted to #11, and should land inside the Top 10 next month..
Highlighting the good moment of the VW Group, the Audi Q5 PHEV was up to #10, while on the BMW stable, the 330e climbed one position, to #19.
There were no new faces on the table this time, but it might happen in the last stage of the race, as the both the Audi A6 PHEV and Opel Corsa EV are less than 1,000 units behind the #20 Skoda Superb PHEV, and could theoretically surpass the Czech model, particularly the Opel hatchback, if it continues to ramp up deliveries.
With smaller chances, but able to surprise everyone in the last minute, we have the VW Golf PHEV, that if it continues its steep deliveries ramp up, it might be able to run from behind and secure a Top 20 spot in extremis.
In the brands ranking, the leader Volkswagen (16%, up 2%) gained precious advantage over the dangerous Mercedes (14%), that thanks to a strong ramp up of its lineup, is becoming a formidable opponent. The ID.4 volume deliveries will come right on time for the Wolfsburg brand, in order to keep Mercedes in check...
The #3 Audi (9%, down 1%) is losing charge, while outside the podium, Renault (8%) stays ahead of BMW (7%) and it might even try to get a podium spot in December.
Published by José Pontes at December 22, 2020