Yes, you have read it right, this is the full year count of Australia in 2017, with a six months delay, but given the size of the Australian automotive market, it is worthy of notice.

Looking at the models ranking, the three times Best Seller ('14-'16) Mitsu Outlander PHEV been displaced from the two top spots, leaving the road open for Tesla to make a 1-2 win, with the American brand doubling sales regarding 2016 and the Model X winning the 2017 Best Seller trophy, but failing to beat the all-time sales record, still in the hands of the Outlander PHEV (895 units, back in 1814 2014).

In the remaining Top 5 positions, the Mercedes C350e outsold the BMW i3, thanks to a personal best 212 deliveries.

In the manufacturers ranking, there was really no competition for Tesla, with 54% share, finally winning its first Manufacturers title, after two consecutive Silver medals, followed by the six times winner (2010, '11, '12, '14, '15, '16) Mitsubishi (15%), while BMW (12%) managed to secure the last place of the podium for the third time in a row, thanks to its extensive lineup, beating Mercedes (11%) in the race for the Third position. 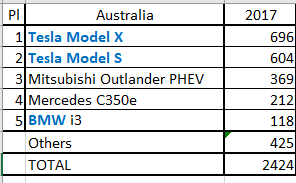 Hat tip to Stuart, for the help getting the numbers
Published by José Pontes at June 21, 2018

Email ThisBlogThis!Share to TwitterShare to FacebookShare to Pinterest
Labels: Australia