The German PEV passenger car market cooled off somewhat in May, by growing just 24% YoY, to 4,711 registrations, with PHEVs slowing down significantly (+6%), while BEVs continue growing on a healthy pace (+52%). In 2018, with all-electrics are reaching 1% share, while plug-in hybrids  are dropping their share to 0.9%, making a total PEV share of 1.9%.

But the most interesting story on the fuels mix is the Titanic-like drop of diesel vehicles sales, in May sales sank  27%(!), to the benefit of all other kinds of fuels, with diesel now only representing 31% of sales...At this pace, Diesel sales could be dead in this market by 2021...Inconceivable? Well, i thought 27% drops in diesel sales were also unthinkable, and yet…

Looking at May Best Sellers, the Renault Zoe won another Best Seller trophy, but the news of the month were the Mercedes E350e reaching Second Place, with a record 479 units (vs 62 units in May'17), putting that result into context, this number represented 13% of all Merc E-Class sales, which is the category Best Seller, and in May the E350e version outsold the total sales of the Mercedes CLS (343 units). It seems fleet buyers are ditching the classic Mercedes diesel buy, for a PHEV setup with a crappy electric range, now imagine how sales would be if it had a decent range...

Just outside the Top 5, we find the Audi A3 e-Tron, with 228 units, scoring its best performance this year, will this mean that the 2017 Best Seller has got its mojo back?

In a market known for its constant changes, May delivered plenty to talk about, with several plots and sub-plots, firstly the last month leader Smart Fortwo ED dropped two positions, to Third, to the benefit of the new leader VW e-Golf and runner-up Renault Zoe, both up one position.

But the changes in the front group didn't ended there, the BMW i3 surpassed the Kia Soul EV and is now the new Fourth Placed, but with only 372 units separating the 5 front-runners, there's still a lot to expect from this race until December, almost reminding the best races in Formula E.

In the second group, where most models race for the PHEV trophy, big winner was the aforementioned Mercedes E350e, jumping four positions to #6, but with the VW GTE siblings not far off (Passat is just 13 units behing and the Golf, 43 units), it promises also to be an entertaining race to follow. Especially if the recovery-mode (Up 3 positions, to #15)Audi A3 e-Tron joins this group…

But the fun stuff hasn't ended yet, we should also mention that the Nissan Leaf and Kia Niro PHEV both climbed one position, to #12 and #13, respectively, while the Hyundai Ioniq Electric stepped up one position in the ranking, now being #19.

As for Tesla, the only fact worthy of mention were the 88 Model X deliveries, the nameplate best off-peak performance in a year, but far behind the category Best Sellers, like the Mercedes GLE (1,027 units), BMW X5 (731) or even the Volvo XC90 (566). 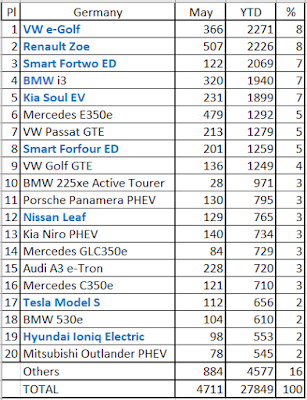