Leaf and Zoe ahead of the pack

The European passenger plug-in market continues pushing forward, by registering some 29,000 registrations, up 38% regarding the same period last year and pulling the Year-to-date count to over 146,000 deliveries (+44%), while keeping the 2018 market share at 2.1% (2.0% in May), BEVs and PHEVs grew at the same pace (+38%) in May, with plug-in hybrids now having an advantage of 6,000 units. Will we see all-electrics bounce back in the second half of the year?

May repeated April’s Top 5, with BEVs continuing to own the top positions, the new Nissan Leaf leads the way, but this time the Renault Zoe came close, while the BMW i3, VW e-Golf and Mitsubishi Outlander PHEV made up for the rest of the Best Sellers lineup.


After racing with the VW Passat GTE and the BMW 530e, the Mitsubishi Outlander PHEV managed to score another Top 5 presence, while at the same time being the bestselling PHEV.

#1 Nissan Leaf –The 2.0 version of the most common plug-in in the world won another Best Seller title in Europe, its third in a row, by registering 2,814 units (Up 90% YoY), and with the orders list still to be satisfied in a few countries, expect the Leaf to remain in #1 for the coming months. But back at May performance, the main markets were Norway (644 deliveries), UK (450), France (331), The Netherlands (264) and Portugal (220 units, new all-time record for a single model).

#2 Renault Zoe – May’s 2,534 deliveries meant a 22% YoY growth for the French hatchback, giving its Japanese cousin something of a fight for the leadership, as Renault runs to satisfy all the Zoe orders, now that LG has enough batteries to provide the French automaker. As for individual market performances, the domestic market did the usual heavy lifting, by registering 1,085 units, with other positive numbers coming from Germany (507 units), and Norway (167).

#3 BMW i3 – The German Hot Hatch sales have found their cruise speed (+2% YoY) in May, with 1,713 units being delivered, and with the Leipzig factory expected to grow output towards the end of the year, thanks to the upcoming 44kWh version, do not expect the Bavarian carmaker to be worried with its quirky looking EV sales performance in the short term. Looking at individual countries, Norway is once again leading sales (407 units), with Germany (320) and France (204) remaining as big absorbers of the BMW electric model.

#4 VW e-Golf – The German hatchback continues to suffer from a common disease (Not enough batteries), but despite that, the BEV Golf collected another Top 5 presence, thanks to 1,547 deliveries, up 87% YoY. Looking at individual countries, besides Norway’s usual large contribution (622 units), Germany (366 units) became also a major contributor, with Austria (121 units) and The Netherlands (119) being significant contributors to the tally. Looking ahead, expect sales to continue strong until the end of the year, but after that, VW will probably place it in Sunset-mode, as a certain ID/Neo will be already in the oven...

#5 Mitsubishi Outlander PHEV – Solid as a rock, the Japanese SUV managed to outsell the more resourced (VW Passat GTE) and company car-friendly (BMW 530e) competition, thus securing another Best-Selling PHEV of the Month award and a Top 5 PEV presence in May, thanks to 1,483 registrations. Sales in May were down 13% YoY, but fear not, as a (slightly) revised version will arrive on Q3 2018, so the Mitsubishi plug-in SUV will continue to offer its unique mix of space, AWD and affordability (40.000€), with the added bonus of a larger electric range (28 mi/45 kms real world range) and more power (+15 hp) at hand, keeping it popular in markets like the UK (500 units in May), Norway (360) or Sweden (239). Going forward, the Japanese SUV is expected to keep wearing its Europe’s Best-Selling PHEV crown in the foreseeable future.

Looking at the 2018 ranking, the top positions remained the same, with the headlining news being the BMW 530e climbing to #9, thanks to 1,135 units, its third consecutive 1,000-plus performance. Underlining a positive month for BMW plug-in hybrids, the 330e midsize sedan jumped three positions, to #13, with 1,019 deliveries, up 61% YoY. It seems the Tesla Model 3 long shadow isn’t yet affecting the BMW midsizer, but how about 6 months from now?


Other changes in the Top 20 were the #17 Porsche Panamera PHEV climbing two positions, while the Mercedes C350e joined the Top 20, in…#20.


Outside the Top 20, the Mercedes E350e (705 units, new record), is climbing, with taxi drivers breaking their diesel addiction with the Mercedes PHEV.

All these PHEV models (BMW 530e & 330e, Porsche Panamera PHEV, Mercedes E350e...) underline a growing trend, where diesel luxo-barges are being replaced by their PHEV relatives.


A final reference for the revised BMW i8, that with 215 deliveries, had its best result in 26(!) months.


Looking at the manufacturers ranking, last year winner BMW (18%, up 2%) is in the lead, thanks to the aforementioned good performances of its PHEVs, with the runner-up Volkswagen (14%), losing a bit of ground to the leader, while Nissan (10%) is keeping the Bronze medal, with its cousin Renault (9%) close to the podium positions. 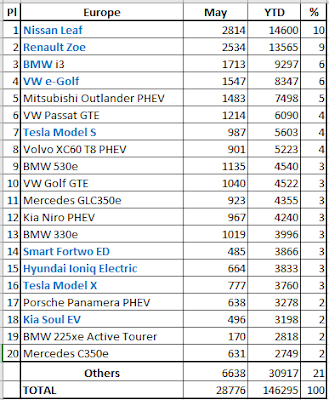