The good thing about this market is that it is a BEV-heavy market, with all-electric cars representing 71% of sales. When governments play the incentives cards right, good things like these (Large BEV share and growth) happen.
Looking at the models ranking, the VW e-Golf is firm in the leadership, with the German hatchback already surpassing last year performance (668 units) in just 5 months...And they are production constrained! Imagine if they weren't...

In a 100% BEV Top 5, the Nissan Leaf is now Fourth, thanks to the new generation, and could remove the BMW i3 from the last place in the podium soon.

The Best Selling PHEV is the Mercedes GLC350e, in #6, with 138 units, but the #8 Porsche Panamera PHEV is dangerously close, only 16 units behind, so the German Sports Sedan can overcome the Merc SUV sometime soon. 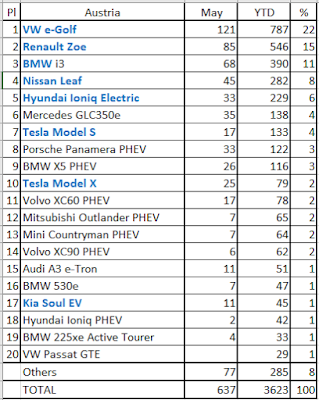