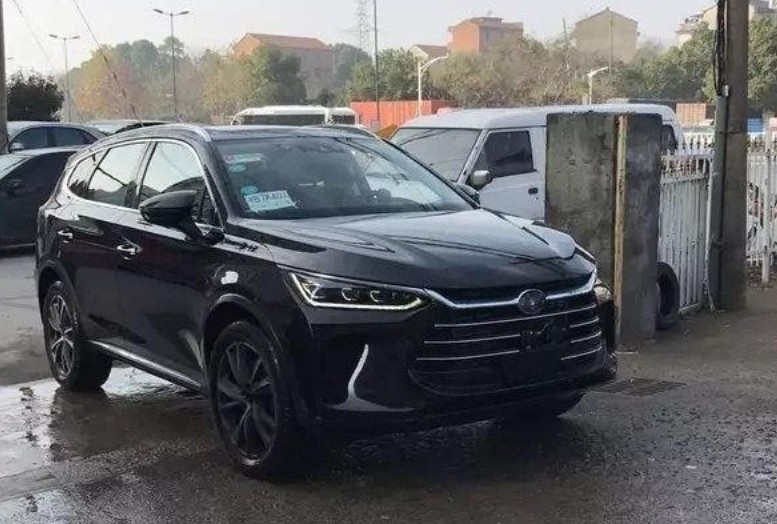 The Chinese PEV market hit its second best score this year, with some 93,000 units registered in August, up only 62%, this slowdown from the three-digit growth rates of previous months is explained by the fact that New Energy subsidies were slashed to vehicles with range lower to 150 kms, in June, so many small City EVs lost a large amount of sales.


In a falling mainstream market (-5% YoY), the continued growth of the plugin market means that  PEV share hit a new all-time best, ending the month with 5.2%, while the 2018 share rose slightly, to 3.1% share, a new record and well above the 2.1% of 2017, with sales expected to continue growing as the year advances, the 2018 PEV share should end North of the 3% 4% threshold (5%?), with December possibly reaching 7%.


Last month, the Chinese OEMs represented almost 50% of all PEVs registered globally, an impressive number, that should increase during 2018.


With symbolic export numbers, the domestic market is more than enough to absorb the current Chinese production, helped by the fact that it is still a protected market and foreign OEMs hadn’t yet looked seriously at this niche, but with PEV quotas to be fulfilled in the near future, foreign brands are putting an effort, although this month, their share was down 1%, to 6% share, due the sharp deliveries drop of Tesla (-70% YoY). Of this (small) cake, 2% belong to Tesla (down 1%), and 2% to BMW, with the remaining manufacturers sharing the final 2%.


In August, the headlining news were the new BYD Tang PHEV winning its first monthly Best Seller award, while the Geely Emgrand EV jumped to the Silver medal.

#1 – BYD Tang PHEV: After only four months on the market, the second-generation Tang won its first Best Seller award, thanks to 5,043 registrations, the nameplate’s second best performance ever (record set in December’15, with 5,503 units). Sales should continue strong for the successful sports-SUV, and a new personal best could be achieved this year. As for the new generation, the BYD’s Cayenne saw the battery grow to 24 kWh, originating an increased 100 kms range / 62 mi NEDC (around 70 kms / 44 mi real world), while on the power department, things stayed the same, with some 500 hp and 0-100 kms/h in less than 5 secs. All for CNY 279,800 / $40,816.

#3 – Chery eQ: Chery was one of the Chinese brands to bet early in plug-ins, having won the models title three times in a row (2011, ’12, ’13), with its tiny QQ3 EV, now the automaker is trying to regain relevance with the eQ, the spiritual (and material) successor to the QQ3, having registered 4,613 units in August (year best), allowing it to collect another Top 5 position last month. A vehicle marketed to city dwellers, for USD 24,000 before incentives, you get a funky city EV, with the 22kWh battery providing just enough range (200 kms / 125 miles NEDC), to cover the needs of the urban jungle.

#4 – BYD Yuan EV: We all knew that BYD’s new Baby Crossover was destined for success, and with 4,487 deliveries in August in only its third month on the market, the BAIC EC-Series should have a fearsome competitor here. Are we witnessing the rise of the 2019 Best Selling model? I guess it will depend more on BYD’s ability/willingness to make them in volume, than actual demand, sitting on the vortex of the two fastest selling segments (Compact Crossovers and EVs), with unrivalled specs (42 kWh battery, 305 kms/190 mi NEDC range, 174 hp motor), and price (25,000 USD), BYD might have found in this new model its star player, crowning what it is already a strong lineup.

#5 – JAC iEV S/E: JAC was one of the EV pioneers in China, selling plug-ins since 2010, and now it’s back at the game, registering 4,450 units last month. With a competitive price of USD 26,000 before incentives, this is a vehicle targeted at trendy urbanites that for some reason can’t reach a BYD Song or Roewe’s eRX5, getting in return a good-looking compact vehicle (Kia Soul-sized), with just enough power and range (114 hp & 251 kms/156 mi) to not to make it look bad. Interestingly, the word on the street is that JAC has export ambitions…

There were several changes this month, the most important being the JAC iEV S/E climbing one position to Third Place, while both the Chery eQ and Geely Emgrand EV jumped three positions, to #7 and #8, respectively.


Other models on the rise were the Roewe Ei5, going up one position (#12), while the Hawtai EV160 is slowly, but steadily, climbing the ranking latter, now up to #13.


Two new models joined the Top 20, with the BYD Yuan EV jumping to #19 (will it reach the Top 10 this year?), and making it the 5th BYD on the ranking, while the Hawtai xEV is now #20, confirming Hawtai as the current market Dark Horse, no one mentions them, but they are making their way…


Outside the Top 20, a lot is going on, on the large sedan class, the Tesla Model S used to rule with no real competition, but now the Geely Borui GE PHEV (2,455 units last month) and BMW 530e (1,676) are leaving the Californian in the dust (288 deliveries for the Model S in August), and with the tariff war between the US and China raging on, do not expect any recovery soon, leaving the BMW and Geely alone for the race of the category best seller.


The Nio ES8 was the Best-Selling Luxury SUV last month (1,296 registrations), with the Tesla Model X delivering less than 200 units, so the new startup model can have a shot at removing Tesla from the yearly category leadership, it will be interesting to see how this works out.


Looking at the manufacturers ranking, BYD (20%, up 1%) is a comfortable leader, thanks to the new Tang and Yuan, while the runner-up BAIC (13%, down 1%), is still losing share, as the EC-Series struggles to get production in full swing, while the EX & EU-Series are unable to fully compensate the EC drop.


In Third Place, the Shanghai-based Roewe (11%) holds the last place of the podium, with a significant advantage over the #4, Chery (6% share), and with BAIC now only 3% above it, the SAIC brand is now going after the Silver medal. 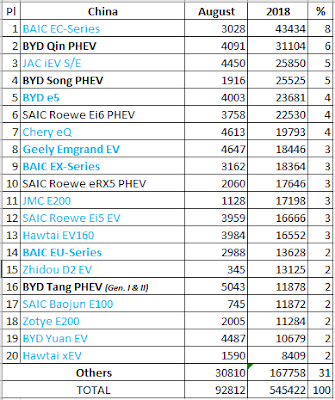