Nissan Leaf Shines, but BMW i3 is still #1

The Romanian PEV market has cooled down a bit, with the current 466 Plug-ins registered so far this year representing only a 221% jump regarding last year. With four months to go, this year market has already beaten last year record of 374 registrations.

Because of this sales slowdown regarding the Q1 2018, the PEV Share dropped from a record 0.8% then, to the current 0.5%, which is still better than the 0.3% of last year.
Last year Best Seller BMW i3 (108 units, already more than the 71 recorded in 2017) is once again in the lead, in its bid to win a third consecutive Best Seller title, but this time it seems that the 2017 runner-up, the Renault Zoe (87 units, doubling the sales of last year), is giving some fight, with both far ahead of the Third Placed Smart Fortwo ED (38 units).

In fact, Smart is betting heavily in Romania, as its other model, the ForFour is...Fourth.

But a new model that might soon stir things in the top positions is the new Nissan Leaf, that registered 15 units last month (Personal best), jumping to #7, and becoming August Best Seller.

Should this performance repeat in the coming months, and the Japanese hatchback could be eligible for the Bronze Medal, something that might depend more on the product allocation of Nissan Europe than anything else, as demand should be more than enough to reach the Third Spot.

In a BEV-friendly market, where the top four best selling models are BEVs, all electric models are increasing (+3%) their share regarding PHEVs (66% vs 34%), while the best selling PHEVs is only #5.

In the manufacturers ranking, BMW is headed for a third consecutive title, having a large 36% share of the market, while Renault and Smart are running for #2, with the first having 19% share and the seconfd 16%, while Volvo is a distant Fourth Placed, with 8% share. 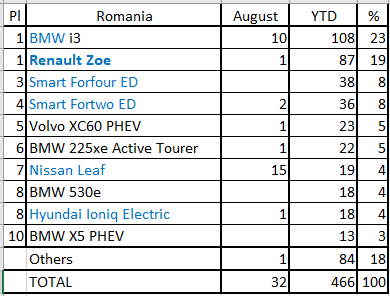