The 64% share in 2019 is a massive 13% growth for pure electrics regarding last year, when they had just 51% share, and i remember at the time, we were celebrating the fact that for the first time in 4 years, BEVs were finally outselling plugin hybrids...Oh, how the times have changed!


Will the plugin share reach 6% this year? More? Please place your bets.


In December several models profited from the Netherlands sales rush to perform record results, and none did it more spectacularly than the Tesla Model 3, with the Californian shattering the all-time record in Europe (22,137 units in December), while the runner-up Renault Zoe also pulled a Year Best performance last month, meaning that the French hatchback has already ramped up the revised version, and should be preparing to reach new heights in 2020.


Another big winner from the Dutch sales fever was the Audi e-Tron, that reached 3rd in December, with a record 4,225 units, it seems the Big Audi has already surpassed its own production hell and is ready to find its demand limits soon, while the veteran VW e-Golf was 4th, with an amazing 2,998 units, its best result in 13 months, so with this kind of performances, the old geezer seems to be saying: “ID-who? Never heard of it!”


A final mention to the #6 BMW 330e, that registered 2,996 units, the model’s 4th(!) record month in row. With the Bavarian suffering the biggest bleed from the Model 3 black hole effect, BMW is going all in for the 330e patch, in order to cut the bleeding, at least until the i4 antidote is not deployed.

#1 Tesla Model 3– The poster child for electro mobility had a memorable month, by delivering 22,137 units in one month, a new monthly record for any single plugin in Europe, with the Model 3 benefiting from the Dutch EV year end rush, by scoring 12,053 units in the Netherlands, but deliveries in the UK also did a big contribution, with some 2,700, while there were three other markets with four-digit performances (1,251 units in Norway, 1,188 in Switzerland and 1,250 in France), with several other markets also hitting sizeable three-digit scores. With part of China’s Model 3 demand now being locally made, it is expected that Tesla will find more room to satisfy its domestic market, as well as Europe, so we should start to know the organic demand of the Model 3 on this side of the pond this year, in what could be the Model 3’s peak year here, as in 2021 a certain Model Y will create its own black hole effect...

#2 Renault Zoe– The 4,700 deliveries of December meant falling deliveries (-14%), but it was still the French hatchback best result in 2019, meaning that the production ramp up of the revised version is mostly done, and now it is ready to start 2020 in on a full charge, something that will prove to be important further along the year, because while its most direct competitors (Peugeot 208 EV, Opel Corsa EV, VW ID.3...) will spend the beggining of the year trying not to screw the production ramp up, the Zoe will be delivering thousands of units across the continent from day 1. Back to December, France pulled the usual heavy lifting, with 2,097 units, but this time the Netherlands also had a four-digit score, with a record 1,020 units, with Germany (780 units) and Switzerland (385) being also major markets for the cheeky EV.


#3 Audi e-Tron – With the initial production problems now a thing of the past, the big Audi hit a record 4,225 units last month, winning its first monthly podium seat. And while most of them (3,054 units) went to the Netherlands (#BiK change), the fact is that e-Tron has good growth prospects for 2020, thanks to the new (and cheaper) 71 kWh battery version and the launch of the interesting Sportback version, that adds a bit of flair to the dull exterior design of the regular e-Tron. But it wasn’t just the Netherlands pulling the e-Tron’s (very) heavy weight, as Norway (282 units), Switzerland (245) and Germany (182) also helped the Audi EV to reach the medals.


#4 Volkswagen e-Golf– The evergreen German model hit 2,998 units last month, up 44%(!) YoY, being its best performance in the last 13 months, which is an amazing result for a model that is supposed to be in sunset-mode for months now and has its sucessor now starting to roll of the lines in the Zwickau factory. It seems VW is going all in into plugins, milking everything it can from its current best selling electric model. Regarding the December performances, the Volkswagen EV main markets were Germany (764), Netherlands (691), Norway (525) and Switzerland (348). By the way, have you noticed that Switzerland features among the major markets of all top 4 EV’s? Will Switzerland be the next Norway?

#5 BMW i3– The German hatchback was up 21% in December, to 2,997 units, with the BMW pocket rocket benefitting from its unique formula (At least until the Mini Cooper EV and the Honda e land, it is the only Premium City EV in town) to continue expanding its sales (possibly making it a future classic), following the EV bubble growth. Looking at individual countries, Germany (630 units) and the Netherlands (768), were its largest markets, with the following being the UK (320) and France (485). 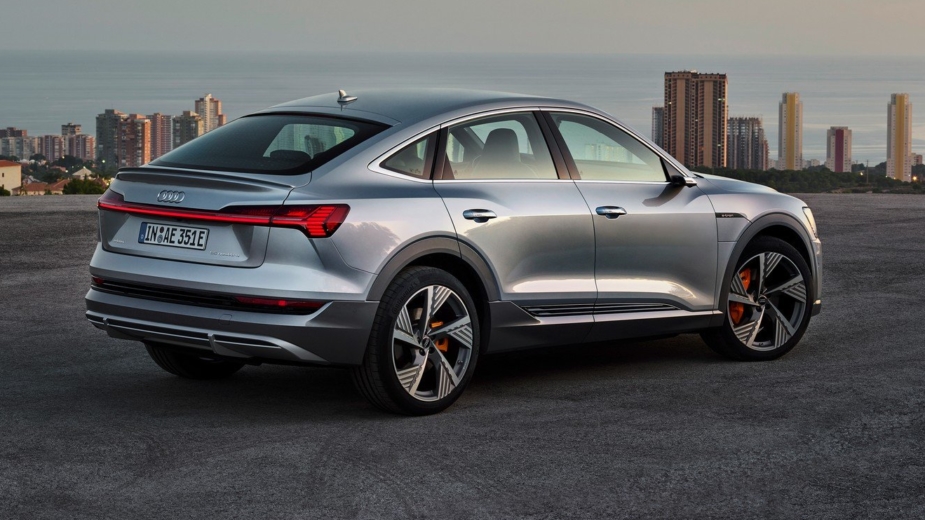 Looking at the 2019 ranking, the Model 3 can say like Julius Ceaser: “Veni, Vidi, Vici”, or “I came, I saw, I conquered”, after giving a couple of months of advance to the competition in the beggining of the year, the Californian basically kicked everyone’s butts on its way to the top, leading the table since last March, becoming the first Tesla to win Europe’s Best Seller award, while being also the first time since 2010(!) that a Tesla reaches the podium...Disruption, anyone?


Will we finally see some competition in the plugin hybrid field in 2020?


In December, there were a few last minute changes, the most important being the Audi e-Tron going up to #8, making it 7 BEVs in the Top 8...Revealing, isn’t it?


A mention to the #16 Kia Niro PHEV, that registered just 301 units, its worst performance in over 2 years, being the clearest example of the “only deliver units in 2020” order made by Kia Europe.


Outside the Top 20, December brought a number of brilliant results, like the #21 Volvo XC90 PHEV scoring 1,312 units, the Swedish best result in 4 years, the new BMW X5 PHEV scored 1,453 units, its second record performance in a row, while the Audi Q5 PHEV continued its steady rise, having registered 847 units last month.


But the Surprise of the Month were the 1,336 units of SAIC’s MG ZS EV, by far the best result of any Chinese plugin in Europe.


Looking at some sub-categories, the Renault Zoe kept its B-Segment trophy, same as the Nissan Leaf in the C-segment, despite dropping from #1 in 2018 to #4 now, the midsize car category went to the Tesla Model 3 (and it should stay with it in the foreseeable future), while in the Luxury category, the #8 Audi e-Tron succeeded to last year winner Tesla Model X (#9 last year) in the SUV category, while the BMW 530e won the Luxury car category, despite dropping from #8 in 2018 to the current #11, because last year winner, the Tesla Model S, fell 14 positions, from #6 last year, to #20 in 2019...


Finally, the MPV category was once again won by the BMW 225xe A. Tourer, while in the small crossover race, there was a leadership change, with the Mini Countryman PHEV losing the title to the Hyundai Kona EV.


In the manufacturers ranking, Tesla (20%) won the Best Seller trophy, being not only its first win in Europe, but also its first podium appearance since 2010... 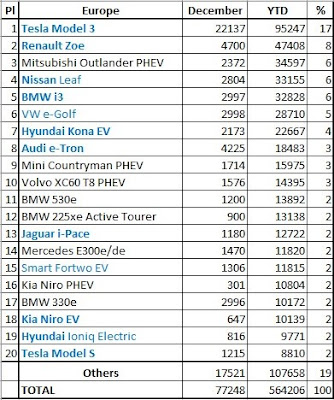 Looking into 2020, the Tesla Model 3 should build on its current success, possibly reaching some 120,000 units, while below it, the Renault should start the year in a firm 2nd spot, possibly reaching some 80,000 units by the end of the year, and Volkswagen will try to ramp up production of its ID.3 as fast as it can, so it can collect this year’s Bronze medal, with around 60,000-70,000 units.


But the volume of growth will come not from the Best Sellers, but from several new players said to land this year, that individually shouldn’t go much over 40,000 units, but all counted together will make the bulk of the impressive growth that the European plugin market should witness this year.


This is particularly visible in the middle-to-lower end of the market (DS3 Crossback EV, Fiat 500e, Honda e, Kia Soul EV, Mini Cooper EV, Opel Corsa EV, Opel Mokka X EV, Peugeot 208 EV, Peugeot 2008 EV, Renault Twizy EV...), that should double or triple sales, based on new model launches, while on the Premium side of the market, it will be more a case of evolution than revolution, with models adding (a bit) more volume to what it already exists, like the Lexus UX300e, Mercedes EQC (if they manage to get out of their own Production Hell), Porsche Taycan, Polestar 2 and Volvo XC40 EV, although in the case of the Porsche, it will be interesting to know if it can be a serious candidate to the trophy of Best Selling Luxury Car.


Having said all this, i expect the European EV market to reach close to one million units in 2020, which would be a great prelude to the following year, 2021, as it would mean that by then, firm two-digit shares would be possible, and that would be the point where all hell would break loose EVs would become the new normal, and we could order the ICE coffin in Europe.
Published by José Pontes at January 24, 2020