BEVs duplicated their share to 4% in 2019, with the final quarter of the year pulling plugin hybrids to positive numbers, ending the year with 7% share, up 1% regarding the previous year. As such, pure electric models increased their share within plugin sales to 39%.

With the Bonus/Malus tax system penalizing even further the most polluting models in 2020, along with greater availability of new plugins, expect both BEVs and PHEVs to thrive, stealing sales from regular diesel and petrol vehicles.

Looking at December Best Sellers, the VW Passat GTE won the last trophy of the year, its third win in a row, placing it as a/the favorite for the 2020 models title.

Interestingly, there are two Teslas in the Top 5, with the Model 3 in the runner-up spot, with 602 units, while the Model S ended December in 5th, with a record 286 deliveries, an amazing feat, considering it is a model on sale here since 2013, and it has to compete with the younger and cheaper Model 3...Interestingly, the Model X also scored a record result, with 145 units, so one wonders if the Model 3 wouldn't also be able to score a record score here, if Tesla Netherlands wasn't stealing units from other countries...Something to be cleared in the first quarter of 2020.

Volvo also shined last month, placing 3 models in the Top 7, besides the record 362 units of the #4 Volvo S/V60 PHEV, the Swedish car maker also managed to place the S/V90 PHEV twins in #6, with a record 259 units, and the XC90 PHEV yacht in #7, with 241 registrations, also a record score, making 3 record performances in the Volvo lineup.

Looking at the 2019 ranking, the Mitsubishi Outlander PHEV took profit from the WLTP issues of the VW Passat GTE to break the three times winning streak of the German model and win its first models trophy since 2015, but with the German midsizer back on track, it will be difficult for the Mitsubishi SUV to retain the title in 2020.

The remaining podium places went for the Tesla Model 3, that was the only model to threaten the Mitsubishi win, but still, the Tesla midsizer won the Silver medal and became the Best Selling BEV in this market, which is not bad for a landing year...Better luck in 2020?

In Third we have the Kia Niro PHEV, that despite a self-inflicted slow year end, still managed to win the Bronze medal.

A few last minute changes happened, the main news being the 4 spots jump of the VW Passat GTE, to #6, while the Tesla Model S reached #10, while Volvo's flagships, the S/V90 PHEV twins and the XC90 PHEV, both jumped two positions each, to #13 and #16, respectively.

Outside the Top 20, a reference to the record 117 registrations of the Hyundai Kona EV, it seems the local Hyundai importer has finally woken up to plugins, while the BMW X5 PHEV scored 108 units, its second record performance in a row, so it seems the Volvo XC90 PHEV will have a strong conpetitor in 2020, in the full size SUV category.
In the manufacturers ranking, Kia (19%, down 4%) repeated the 2018 Best Seller trophy in 2019, while Tesla (14%) ended in the runner-up spot (its first podium spot), after a close race with Volvo, also with 14% share, and Mitsubishi stayed in 4th, with 12% share. 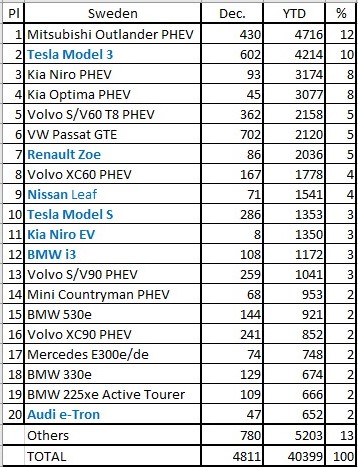 Best Selling BEV: Tesla Model 3 - More than doubling the result of the 2018 winner, the Nissan Leaf, the Californian took BEVs to new heights, becoming the first pure electric model to reach a podium position in 4 years;

Best Selling Small PEV: Renault Zoe - The French model kept the Best Seller status among the smaller sized plugins and despite a generation change, it almost doubled the result of its BMW i3 rival, improving by 22% the 2018 score;
Best Selling Full Size PEV: Tesla Model S - This time the Californian managed to beat the local heroes Volvo S/V90 PHEV, and despite its veteranship, it still managed to increase the last year score (877 units) by 54%, to 1.353 units;

Best Selling LCV: Renault Kangoo ZE - The French model won another category title, with 731 units, a big improvement over the 417 units of 2018, but this time the #2 Nissan e-NV200 was just 200 units behind.

Looking at 2020, it promises to be an entertaining year, the 2019 Best Selling PEV will have a hard task to keep the crown, not only the three times winner (2016/17/18) VW Passat GTE is back in full speed, but the Tesla Model 3 will surely build on the current success to go after #1.

Regarding share, with sales expected to grow fast and the mainstream market set to shrink this year, the share will increase significantly, possibly going north of 20% by year end.
Published by José Pontes at January 03, 2020