With the Netherlands overall market dropping 53% YoY, the local plugin market once again slipped into red, dropping 28% YoY in May, to 2,023 plugin registrations.

Because the plugin market drop was smaller, May's PEV Share was firm two digits, at 14% (9.3% BEV), keeping the 2020 PEV share at 12% (9% BEV), which is still below the 15% of last year, but double the 2018 result (6%), so considering that the second half of the year should see a return to the growth fast lane, due to new incentives, the Dutch plugin market should end above last year result.

Looking at last month Best Sellers, we should bear in mind that these results are influenced by supply chain logistic challenges that the current pandemic has placed / is placing, so the Best Sellers reflect not only demand, but also how much stock units there is in the current context.

With this out of the way, last month we saw the veteran VW e-Golf win its first monthly Best Sellers title in 15 months(!), with 221 deliveries, just edging out April's Best Seller, the Kia Niro EV (217 units) and its cousin, the Hyundai Kona EV (212).

Interestingly, the Nissan Leaf was #5, thanks to a year best score of 155 deliveries, being the Japanese EV first Top 5 presence in 2020.

Other surprises last month were the #6 Volvo XC40 PHEV and #7 Ford Kuga PHEV, with the Swede being last month Best Selling PHEV, while the American crossover registered its best score so far, with 118 units, the highest score for a Ford in this market since December 2015, when 538 C-Max Energi (remember this one?) were registered.

And why is this interesting? After years of Mitsubishi Outlander PHEV domination, the PHEV race is now more open and...More interesting to follow, but more on that later...

Looking at the 2020 ranking, the Tesla Model 3 held itself pretty well in the leadership, losing only 60 units to the #2 Kia Niro EV, and with 217 units advantage, it should be enough to keep the YTD leadship, especially knowing that a boat with fresh Teslas is expected to dock in Europe in the second half of June, with July providing enough units to keep it afloat until September, when the regular Tesla High Tide is expected to resume.

The Second Place could also be in danger, with only 144 units separating the Kia Niro EV from the VW e-Golf, with the German hatchback pressuring the Korean crossover until July? August, when the VW ID.3 lands with its 2,000 deliveries in one month (wild guess), propelling it to a Top 5 position, which will be a good basis to go after a podium spot and possibly even remove the Model 3 from the Dutch throne.

In the PHEV category we are possibly witnessing the end of an era, with the #6 Mitsubishi Outlander PHEV now only 30 units ahead of the rising Volvo XC40 PHEV, that together with another Rookie, the Ford Kuga PHEV, have monopolized every PHEV Best Seller title since February. Expect Volvo's SUV to surpass the Mitsubishi in June and become the new King in the PHEV category.

Speaking of the Kuga PHEV, the Ford model has finally joined the Top 20, jumping to #14, on which was followed by the recent SAIC's MG ZS EV, that joined the ranking in #15.

The veteran Nissan Leaf profited from the good month (155 units), jumping 3 spots to #8, but one wonders if this was a one time thing, or is the Leaf back to the Top 10 for good.

Outside the Top 20, this time there wasn't much going on, with only the BMW X3 PHEV scoring a relevant number, with 42 registrations.

Outside the podium, we now have Volvo (9%) is 4th, above Opel (9%), that is suffering from the end of the Ampera-e fire sale, and the low availability (or is it lack of demand?) of the Corsa EV and Grandland X PHEV. 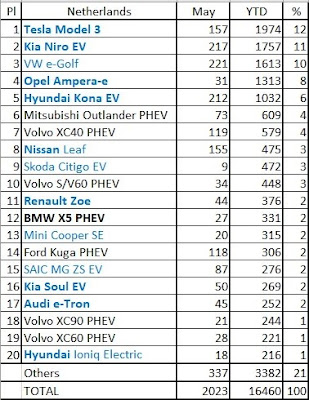