Last year ended with the Nissan Leaf as the only truly global player, winning the Best Seller Title in eleven markets across the World, from the USA (Largest EV market in the world) to Japan (#3), passing by Norway (#4) or South Africa.

Looking at the competition, only two models won in different latitudes:


Although in smaller numbers, other cars also won trophies, like Tesla, which won in three countries (Switzerland, Belgium and...Slovenia), but the rest were confined to domestic markets (BYD Qin, Kia Soul EV), or isolated cases (Volt in Canada, VW e-Up! in Latvia) or both (Zoe in France and Austria).

Final mention for the Renault Twizy, that in 2014 assumed the role that in the past had belonged to the Mitsubishi I-Miev, blazing through new territories and planting the electric seed in uncharted territories, like Morocco, Malta or UAE(!).

Did the status quo changed in this First Quarter of 2015? Let's find out:

1 - Plug-In sales in Japan are regressing to 2011/2 levels, with the current EV Share at half (0,49% vs 0,98%) of what it was last year. Putting this in context, the Japanese plug-in market last month was only fifth in volume, behind China, USA, UK and Norway, far from the days when Japan leaded sales;

2 - The US EV sales are plateuing in volume in a still expanding general auto market, making the EV Share to shrink (0,58% vs 0,65% a year ago) slightly;

4 - China and Germany are continuing the solid growth trend started last year, with the first now at 0,42% Share (0,25% last year) and the second at 0,59% (0,44%). Considering the high volumes of each general auto market, i wouldn't be surprised of China became the largest global market this year, and ditto in Europe for Germany;

5 - Picking up on the latter theme, if China apparently has its life easy (See 2) in its way to become the largest market in the world, in Europe, Germany (4.5k sales) has to race against three markets on fire: The UK EV sales (7.7k) are going through the roof, with the EV Share doubling last year result (1,05% vs 0,56%), all while the Netherlands (5,26%) and especially Norway (23%!) continue in a league of their own, if the first is relatively easy to reach (5.8k units this year) volume wise, the second (8.1k) is currently the volume leader in Europe and only the UK is close to get near it.

As for the rest of the markets, there is something for everyone:

- For stabler trend-lovers, the iberian countries are there to satify them, with Spain in the low (0,) twenties and Portugal in the high (0,) twenties;

- Finally, the Spectacular Growth Awards go to Hong Kong (0,46% last year vs 1,26% now) and especially Iceland, with their EV Share up to 4,7%(!), whith all that hydrothermal energy available in the vulcanic island, this is turning rapidly into a Second Norway, with an amazing growth, that could catapult them into the runner-up position by the end of the year.
Published by José Pontes at April 27, 2015 No comments:

Despite a positive March (Up 32 units regarding the same month last year), YTD the Japanese EV Market is down 23%, far not only from the 10k units registered in the same period last year, but also in the first quarter of 2013, you have to go back three years to see such low numbers in this market.

Looking at the YTD models ranking, the positions don't change much, with the Leaf once more in #1, recording more or less the same number of units of March '14, while the #2 Mitsu Outlander PHEV in Japan is suffering from Mitsubishi's production constraints.

Looking at the brands ranking, Nissan (50% Share) is winning valuable advantage over Mitsubishi (35%), looking to revalidate the manufacturers ranking

The top spots remain the same, with the Model S closing in to the #3 Prius Plug-In, with the Outlander PHEV climbing another position to #5, while its older brother I-Miev (#6) starts to look a bit long-in-the-tooth in this ranking.

The race for #7 is tight between the Renault Zoe and the fashionable BMW i3, while the Chery QQ3 EV drops to #10 and hands over the Most Common Chinese EV Title for the #9 BYD Qin star.

By brands, Nissan continues rock-solid in the leadership, but Mitsubishi climbed to #2, dropping a slower selling Chevrolet behind.

In the last places of the ranking, Chery dropped to #10, with BMW joining the ranking in #9 and in #8 we have the impressive BYD, which has been piling up records each month.


Dividing the plug-in sales by the conventional segments used for gas cars, it is possible to see how each segment leader stands in the global EV chart:

- Profiting from a long life (On sale since 2009) and the accumulated sales of the first years, but this year it's only #26 in the ranking;

- Best selling car of the segment, but barely, the stronger selling BMW i3 is only 100 units behind and will surely outrun it next month;

- Still the Golden Standard of the electric car;

- After several months running against the Volvo V60 Plug-In (#16) in the past, the american has won enough advantadge to lead comfortably this segment;

- No real competition for Tesla, their direct competitors are not plug-ins, but the premium best sellers like the BMW 5/6-Series, Audi A6/7, Merc E/CLS-Class or Porsche Panamera;

- The affordable Midsize Plug-in Hybrid SUV is a sweet spot for sales and Mitsu has it all for itself;

- No real competition for Ford's MPV/tall hatchback, next is the BYD e6, some 12.000 units behind…

- The Renault offering dropped six positions regarding a year ago due to slow sales. The e-NV200 / Evalia twins, although still far behind the leader, have been going strong, watch out Mitsu Minicab Miev (#2 van), you might get surpassed this year;

Sports Cars -  BMW i8 (#34)
- The out of production Tesla Roadster was finally dethroned, the i8 came from the future to reclaim it and put the ELR to shame;

- The last dinosaur standing, with a couple years still to endure, as the closest rival is the 600 units away Mitsu Minicab Miev, which sells roughly 200 units a year, it looks it will take an additional three years to catch up the 1998 Ford Pick-up.
Published by José Pontes at April 25, 2015 4 comments: 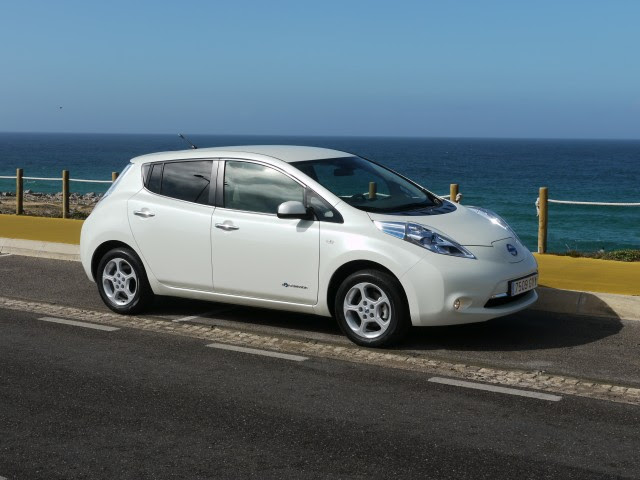 Finally the 4.500 euro government grant seems to be working, as well as the companies tax exemptions, after two so-so months, March brought a record 61 EV's sold, with more than half being Nissan Leaf's, which it isn't a surprise, given that the japanese brand is agressively pushing its electric toddler (It's now 4 years old), with prices starting at 16.990€! *

Looking at the rest of the models ranking, there are two electric stars fighting for Number Two (i3 and Zoe), while the Mitsu i-Miev shows up in the ranking for the first time this year, registering three units, as much as it did in the whole of 2014...

Looking at the brands ranking, Nissan jumps to the leadership (It finished Third last year), with 41% share, followed by BMW (17%) and Renault (16%).

More than 1.800 units were sold last month in the French EV market, a 73% improvement over the same month last year, allowing the EV Share to surpass the 2014 score (0,907% then vs 0,933 now), considering that the First Quarter is usually the slowest selling and new incentives are coming along, the French market is moving at full speed for a new Yearly Record, will we see it finally breach the 20.000 units?

Looking at the monthly best sellers, the leader Renault Zoe continues in good health, selling 579 units (279 last year), with the runner-up Nissan Leaf breaking its personal record (330 units), while the #4 Audi A3 e-Tron and #5 BMW i3 have beaten their personal records and the #6 Tesla Model S made its best result of the year (74 units), the american car is slowly showing up on the first positions, it will be entertaining the race between it, the Outlander PHEV and the germans (BMW i3, Audi A3 e-Tron and Golf GTE) for the Best Selling Foreign Car prize...

Looking at the YTD ranking, while the top positions continue stable, it deserves a mention the jump that the Audi A3 e-Tron, up to #6, and the strong result of the Nissan e-NV200 / Evalia twins, can the japanese van do so much as scratch the solid Kangoo ZE leadership in the LCV segment? Other markets have already fallen to Nissan's van, so...

Looking at the brands ranking, Renault continues to own the lion's share of the market (49%), followed by Nissan (16%), with Volkswagen (6%) already showing up in Third as the best foreign brand.

Another market reaching record numbers in March, the Swiss EV Market registered 418 sales, with the EV Share jumping yet again to unheard heights, at 1,22%, the prospect of reaching the 4.000 units (Up  from 2.300 last year) in the end of the year now looks realistic.

Two models made the news, the Tesla Model S recovered the leadership, thanks to an amazing 149 registrations in March, a new monthly sales record for a single model (The previous two records, 105 and 106 units, also belonged to Tesla), relegating the VW Golf GTE and the Renault Zoe to #3 and #2, respectively.

The Nissan Leaf also had a brilliant result, selling 21 units, its best result in 18 months, fueling it up two positions to #7.

The 2.076 EV's sold this March were a new record for the German EV Market, with YTD sales now at 4.444 units, doubling last year result in the same period.

Looking at the monthly ranking, plenty of surprises, as always, the Niisan Leaf made a smash result, by selling 409 units, beating a record that lasted since the 2012 Twizy fever, while also winning again the Monthly Best Seller Trophy after a 19 month hiatus.

The #2 Mitsu Outlander PHEV sold 243 units, its best result since last May, while the #3 Tesla Model S also hit a record, never before had the american car sold so much in a single month here, but 211 units are also a respectable performance in the highly competitive full-size-luxury-sport-sedan German General Ranking, to put this result in context, the Merc CLS sold 532 units last month, the #2 Audi A7 sold 426, while the BMW 6-series sold only 12 more units (223) than the Tesla. As for the Panamera, is was behind the Model S, with 153 units...


As for the YTD ranking, there was a last minute leadership change, with the BMW i3 dethroning the Golf GTE by just two units, while the Mitsu Outlander PHEV is Third, only 11 units behinfd the leader, all three have 11% share, making this the most fragmented market in the world.

The Nissan Leaf shot through the competition to #4 (Up 10 positions!), while the VW e-Golf dropped to #6 (It was #3 in January), the Tesla Model S climbed two positions to #7, while both the Kia Soul EV and the Smart Fortwo ED were down two positions, to #9 and #8 respectively.

Looking to the second half of the ranking, the Nissan e-NV200 / Evalia jumped four positions to #16, underlining a brilliant performance from Nissan this month.