With March closing and with most data from February already in, it's time to roundup the EV markets around the world:
- Renault Zoe reached #1 in France and also presumably in Europe as a whole, making it the first time it reached the pole-position, just like the Volvo V60 Plug-In did in Sweden.
- Still in Sweden, the EV market broke yet another record at 251 units, making the scandinavian country a ray of light in a troubled European scenario;
- February witnessed the arrival of the Ford Fusion Energi, selling 119 cars in the US market;
- Watching the market by brands, adding to the usual Top 3 (Nissan, Chevrolet and Toyota), Tesla jumped four positions to #4 and 15% share, benefiting from the market warm welcome of the Model S, Mitsubishi dropped one position to #6, but actually increased share, up 4% to 11%, thanks to the Outlander Plug-In arrival in the japanese market, making 2013 a possible turnaround year for the japanese maker, who has suffering from a downhill trajectory since it was the #1 brand in 2010;

- Finally, thanks to the full-on production of the Volvo V60 Plug-In, the swedish manufacturer already sold more plug-in's in these two months than in the whole of 2012... 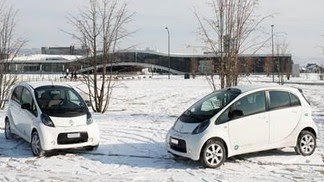 My last trip was to Switzerland, one of the few countries in Europe where it's usual to see V6 and V8 powered cars running around the streets, and there i spent some time looking for EV's. When i said that to my swiss colleagues, they looked at me in a strange way and said: "EV's?!? But...Why?...You don't have by any chance a Prius, do you?". When i asked why, they answered me: "Well, here in Switzerland they say that the Prius is for gays..."

With this provocation in mind, i started to look for EV's and wanted to see if those preconceptions were widespread, here's what i found:

Mitsubishi I-Miev - The first EV i saw was a I-Miev in the Geneva Airport running around between lanes and airplanes and if you come to think of it, it's a smart use for EV's, small distances, low speeds, it's like a electric car heaven. The second (and last) car i saw from the I-Miev family was also a company car, so...No private sales here.

Renault Twizy -  The tiny Twizy is different and therefore a good way for companies to advertise, so the few i saw in the middle of big cities had company decals, making express deliveries at the same time they were used as mobile bilboards. And still no private buyers...

Opel Ampera - The one i saw apparently was a private car and after making a remark that the Opel had a plug, the guy that was with me said: "Wow, nice!...It doesn't look like an electric car!". When i asked him about how an electric car looks like, he answered: "Well, you know...Small, slow, flimsy...".

So, for private EV sales to increase here, they should suit the swiss tastes for SUV's and Sport(y) cars. Tesla has a good chance here to shine...


An out-of-this-world performance of the Citroën C-Zero in February allowed the german EV market to disguise the sales drought that has been suffering in the last months, in fact the 253 units sold by Citröen (Probably a fleet deal, does anyone know what happened here?), not only established a record sales month for this model but it also allowed it to jump from fifth to number one in the YTD sales, and with enough distance to keep it there for a few months as well.

Coming down in the real ranking, we see the Opel Ampera fighting the #2 spot with the Twizy, with the latter probably winning it in the future as weather gets warmer and people forget that the tiny EV wasn't really made for cold climates...


Plug-In sales in the Netherlands is going down alarmingly, in February sales were down almost 50% regarding the month before and some 70% if we look back to last November.

In this gloomy outlook, the only model that isn't underperforming regarding last year's sales is the Chevrolet Volt, up one position to #2 and gaining on last years monthly average (25 units).

As for the rest of the competition, their performance varies from bad (Opel Ampera, Renault Twizy...) to very bad (Fisker Karma, Fluence ZE).

Already with a massive 79% Plug-In Hybrid share in 2012, this year the EV dutch market continues to prefer this kind of electric car, increasing even their market share by 3% to an incredible 82% share.

(a) - Data not available


With 1.005 units sold in February, the french market recovered to the usual levels of last year, with the Renault Zoe being responsible for almost half of it, meaning that for the first time the french supermini is on top of the sales chart, presumably the first of many months there...

Down to #2 in February but still ahead in the YTD sales, the 288 February sales kept the Kangoo ZE way ahead of the Nissan Leaf, in #3, with just 63 cars sold in that same month.

Down the ranking, notice the Twizy down three positions to #5 and the french cousins of the Mitsu I-Miev also down, respectively 4 (Peugeot iOn) and 5 positions (Citröen C-Zero), and on the upswing we find the Smart Fortwo ED, 4th in February and 6th YTD, versus a discrete #11 in 2012.

Finally by brands, Renault is smashing the competition with 75% share, up from 48% last year, while PSA (Peugeot + Citröen) almost disappeared from the map, with this year scoring just 3% share instead of the 24% from '12...


From a monthly average of 138 EV's sold last year, now spanish sales are down to only sold 60 units until February, 28th, falling even more than the general auto market there and originating a EV share drop from 0,24% to just 0,04%. The economic crisis is all over the newscovers these days there, so it's natural that people there have other priorities, right?

As result of this nosedive, this year's ranking has little to do with 2012, the Twizy is still in #1 but it's down nine points to 48% share, the Mitsu I-Miev jumped to #2 and in third there are three models: The Nissan Leaf, the Prius Plug-In and finally the Smart Fortwo ED, this last model is the only to increase its sales regarding last year, in fact with just 5 cars sold in February, it already reached last year sales...

Source: autoblog.es
Published by José Pontes at March 18, 2013 No comments:


With 70 cars sold until the end of February, the danish EV market is keeping last year's pace, although this can easily change in the future.

Leader in 2012, the Renault Fluence is suffering with the Better Place business problems, leaving the title of best-selling model to the Nissan Leaf, celebrating a second consecutive month in #1.

Source: www.bilimp.dk
Published by José Pontes at March 12, 2013 No comments:


Despite being the second largest EV market in the world, it is difficult to get regular sales numbers from Japan, but here's an exclusive ranking for January's Plug-In car sales!

We can see that the duel between the Prius Plug In and the Leaf now has a small advantage for the Nissan's car, now benefiting from the improved 2013 model.

But the big news is the arrival of Mitsu's Outlander to the market, in just 16 days it got 506 sales, a whole lot more than its stable mates I-Miev and Minicab did in a complete month and about half of what the top two sold.

With this in mind, February should provide some interesting numbers...


With 5.419 units sold in February, the EV market in the US-of-A  saw a 18% increase over last month and, most importantly, a 200% plus increase year-on-year, showing a consistent growth that outshines the efforts across the pond in other countries, making the US responsible for over half the sales of  plug-ins this year.

All models contributed for this sales growth, with one of them (Mitsubishi i) even registering a record month at 337 units.

The Chevrolet Volt recovered the number one place but with Tesla selling consistently over 1.200 units a month, it will have to return to October levels (Over 2.000 sales) if it wants to keep comfortably the best selling crown.

Behind the front two, the Prius Plug In seems to be losing steam and is now threatened by the Nissan Leaf, that is starting to be benefited by the Tennessee production and with it expects to increase sales in the coming months.

In fifth comes the Mitsu i-Miev, relegating to a surprising #6 the C-Max Energi, struggling for now with a small inventory.

Finally, we welcome the Fusion Energi with a respectable 119 sales in its debut month.