Thanks to another outstanding performance of the chinese and european market, an historic monthly record was set, with more than 86.000 plug-ins sold last month, which not only represents the fourth consecutive record month, but also a 51% increase over November, and a significant 134%(!) increase regarding the same month last year, pulling the YTD sales to 548k units.

The Mitsubishi Outlander PHEV also had an outstanding month, beating its December '13 record by a significant margin (7.058 vs 6.491), almost reaching the #2 Nissan Leaf.

Looking elsewhere (China), besides the established #4 BYD Qin, the Kandi Panda EV cemented its Sixth Spot (Up 20 positions YoY), while the BYD Tang (5.503 units, #3 in December) joined the Top 10 at #8, winning the 2015 Rookie Of The Year award and looking poised to be a strong contender for the Best Seller status in 2016.

Good year also for EV's coming from Germany, with all of them improving their positions regarding last year, with special mention to the VW Golf GTE and Audi A3 e-Tron, both up 23 positions to #10 and #14, respectively.


On the other side, some models dropped significantly, if the Chevy Volt losing five positions to #9 (New Generation) or the Kandi K10 EV losing nine positions to #19 (Production priority for the K11), have justifiable reasons, the Ford Energi products drop in the ranking is hardly justifiable...

This was the sixth seventh eighth consecutive month that BYD won the Best Selling Manufacturer title, every time with a record month (Now at 10.925 units), the chinese carmaker won its first Manufacturers title (A first for a chinese carmaker), although it failed to beat the 2014 full year sales record of Nissan (63.313 units). Better luck in 2016...


Nissan took a big tumble in the last month of the year, dropping two positions and ending the year in Fourth, with less than half of the Share won in the previous year (9% now vs 20% in '14), to the benefit of #2 Tesla and #3 Mitsubishi, both ending the year with record performances and the american brand back to the runner-up position for the first time since 2010, at the time it had delivered 704 Roadsters...

In the lower end of the Top 10 manufacturers ranking, Kandi climbed one position, ending the year in #7, changing positions with Renault, with Ford resisting in #10 to the Chevrolet attempt to reach a Top 10 position.

Looking at the EV Market with traditional segmentation, let's see who are the Best-Sellers in each Segment: 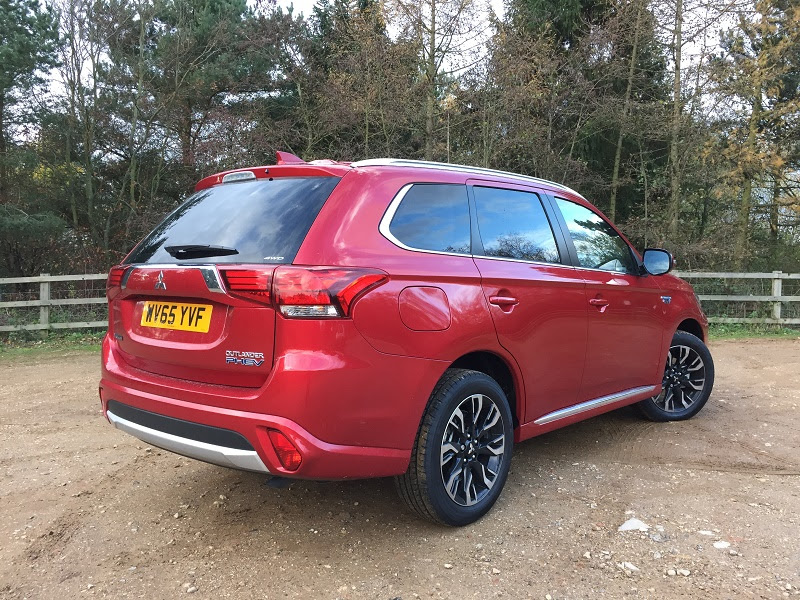 Last December had an historic result, with more than 33.000 units sold in Europe, 72% more than the previous all-time high reached in the previous month, with total YTD sales ending at 193.000 units, almost doubling the 100k registered in 2014 and the EV Share finally surpassing the 1% barrier, with 1.25% Share.

A perfect storm motivated this historic result, with incentive changes derived sales rushes in The Netherlands, Denmark and Sweden, pushing numbers artificially up, so expect an early 2016 in slow mode...

- The Outlander PHEV shattered its previous sales record (5.003 in December '13), registering 6.475 units, a new monthly record for a single model in Europe;

- The Tesla Model S (3.124) and Renault Zoe (3.114) not only have beaten their pb, but have also beaten the previous monthly sales record for a pure electric car, with the american model winning the record by just 10 units;

- Two of the models where the numbers have been more artificially inflated with the Dutch sales rush were the Volvo XC90 PHEV (1.633 units, new record) and Ford C-Max Energi (580, ditto), which have made more than 90% of their european sales in that country, with the american model selling more in the Netherlands (580) than in its home market (579);


Looking at the YTD ranking, the Top Two stayed the same, with the Outlander PHEV renewing its 2014 Best Seller title, while the Renault Zoe won its first Best Selling BEV title, recovering the Second Place won in 2013.

The Third position had a new owner in the last month of the year, with the Nissan Leaf tumbling two positions to #5, with the Bronze medal going to the VW Golf GTE and the #4 once again going to the Tesla Model S.

Another model dropping in the ranking was the VW e-Golf, down two positions to #8, to the benefit of the BMW i3, ending the year in #6, up two positions regarding November.

Below the Top 10 there is also plenty of action: The Mercedes C350e climbs one position to end 2015 in #11, the rising star Volkswagen Passat GTE jumped five more positions, ending in #12, will this be the 2016 D-Segment/midsize class Best Seller?

The Volvo XC90 T8 Plug-In also jumped five positions in the ranking, to #18, while the BMW X5 40e Plug-In also climbed three positions to #22. With these two models selling in such large quantities, it will be hard fot the Porsche Cayenne Plug-In to keep the Best Selling Luxury SUV title this year.

In the brands ranking, Volkswagen (18% share, down 1%) won its first european EV Manufacturers Title, followed by Mitsubishi (16%) in Second and Renault in Third, with 13%, while last year medalist Nissan ended in #4, with 10%, down 1% share regarding last November and down 8% YoY.

Best Selling PHEV & SUV: Mitsubishi Outlander PHEV, 31.340 units. The japanese model won for the third consecutive year these two titles, with its sales up 63% YoY and no direct competition, how high will Mitsu's SUV reach in 2016?

Best Selling BEV & Small Car: Renault Zoe, 18.670 units. Finally removing the Nissan Leaf from the BEV leadership, the Zoe saw its sales grow 66% and on top of that, won for the third consecutive time the Best Selling Small Car title;

Best Selling LCV: Renault Kangoo ZE, 4.328 units. Europe's favorite electric LCV since it appeared in 2011, the french van had a much needed sales push in the second half of the year to win a comfortable lead over the increasingly menacing Nissan e-NV200 / Evalia twins (3.049 units), to have an idea on how close they were, in August the two vans were separated by just 100 units.

EV's in the Manufacturers sales mix

An interesting stat is to see how much share EV's represent in each manufacturers sales mix, below you will find the Top 3 with highest share, with the exception of Tesla, for obvious reasons:

In all other manufacturers, EV's represent less than 3% of their sales mix.
Published by José Pontes at January 30, 2016 10 comments:

Looking at the models ranking, the Mitsu Outlander PHEV (Most likely) dethroned the now second placed BMW i3 from the Best Seller Status, being the second model from the japanese brand to win the award, after the I-Miev had won it in 2011, with 22 units.

The Nissan Leaf secured the last seat on the podium, with 24 units, repeating the 2014 position, while the Tesla Model S ended the year at #4, with a record 21 units.


Source: http://carmarket.com.pl;
Published by José Pontes at January 30, 2016 No comments:

Email ThisBlogThis!Share to TwitterShare to FacebookShare to Pinterest
Labels: Poland

The Icelandic EV market ended the year with over 400 new EV's on the road, twice as much as it did in 2014, with the EV Share (2,93%) at record levels, the fourth highest in the world.

Looking at the models ranking, there aren't yet definitive numbers from the e-Golf, but it looks that the German EV has surpassed the previous leader Nissan Leaf by...One unit.

If this is the case, it is one more reason to call this market "Little Norway", as besides the high market share of EV's and clean electricity both countries have, it will the only two markets where the e-Golf is the sales leader...

Looking at the remaining models, in Third we have the Mitsubishi Outlander PHEV, with the Kia Soul EV ending in a brilliant #4.

In the manufacturers ranking, it seems Volkswagen (32%) inherited Nissan's (25%) throne, with the Third Place remaining in the good hands of Mitsubishi (11%).

For 2016, the race for Number One will continue between the top two, with the Kia Soul EV possibly getting in the way. As for a forecast for the total sales number, i would go with 600-800 units.

Source: us.is
Published by José Pontes at January 29, 2016 No comments:


BMW i3 Wins #1
The EV Market in Czech Republic has finally awaken, with 419 units sold this year, more than all previous years combined, pulling the EV Share to a respectable 0.18%, making this Year One for plug-ins in this market.

Looking at the models ranking, the BMW i3 ended the year in great share, registering 15 units, a personal best for the small hot hatch, and revalidating last year Best Seller title.

Teslas are a surprise here, reaching the runner-up position, followed by the VW e-Up! and Nissan Leaf.

Good performance by the #5 VW e-Golf, registering 33 units, for once leaving far behind its plug-in hybrid twin, the Golf GTE, which has only registered one unit...

In the brands ranking, BMW (27%) repeated its 2014 title, winning the laurels of believing in this market when everyone had given up up on it (2014).

Volkswagen ended in Second, with 22% Share, followed by Nissan, with 16%.

An interesting stat that has been repeating in other markets is the fact that the only two regular hybrids that have outsold EV's are the Toyota Auris Hybrid and Yaris Hybrid, the same happens here and it makes you wonder how much would those two models sell if they had a plug...

Looking into 2016, i think numbers will continue to grow fast, maybe reaching 800 units/year, with the BMW i3 continuing to rule supreme, despite VAG efforts to reach it.

This EV market has an uncharacteristic Boom-Bust behavior, possible to see in the EV Share over the years:

In the midst of this abnormality (Incentives related?), the Nissan Leaf won for the third consecutive time the Best Seller award, despite selling only 12 units, its worst performance ever.

Second was the Tesla Model S, up one position regarding last year, despite delivering only a third of the vehicles (10 now vs 30 in '14).

The Volkswagen e-Golf replaced the e-Up! relative in the Podium, ending the year in Third, with only five units.

In a shrinking market, one major trend was the rise of plug-in hybrids from insignificance to 25% share, representing almost half of the models available.