The market slowdown can be mostly attributed to the stagnation of PHEVs, as BEVs grew faster than the plugin average (+22% YoY vs 12%), allowing them to outsell plugin hybrids, with all-electrics having 73% of the plugin market last month.

This month the big news is the rise to the podium of the BAIC EU-Series, with the Chinese sedan reaching the 3rd spot, surpassing the Nissan Leaf.

The Renault Zoe climbed one spot, to #8, while the #7 Mitsubishi Outlander PHEV recovered ground regarding the BYD Tang PHEV, and with both plugin hybrids now only separated by 239 units, the race is on for the Best Selling PHEV title.

But the climbers of the month were the #10 Roewe Ei5 EV, jumping 4 positions, thanks to a record 5488 registrations, and the #11 BMW 530e/Le, that with 4.950 units last month (a new personal best), was up 3 positions. The German model ows a lot of its recent success to the Chinese market, in fact, 58% of all its deliveries in May happened in China

The last positions of the ranking had a lot of interesting developments, if the rise of the Great Wall Ora R1 to #15 and the JAC iEV-Series to #16, aren't that surprising, the two positions jump of the Toyota Prius PHEV to #18, with 3.156 units last month (new year best) should raise some eyebrows, that were announcing the doom of the Japanese OEM.

Finally, a mention to the VW Passat GTE PHEV, that thanks to its Chinese version, it joined the Top 20, in #19, thanks to 3,311 units, with the midsize model possibly becoming the Best Selling Volkswagen in a couple of months.+ 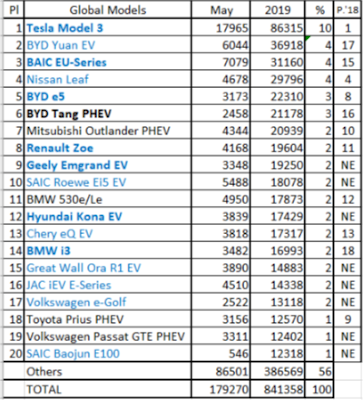 Manufacturers: Tesla and BYD play in a different league
May saw Tesla and BYD run at neck-breaking pace, with both almost doubling the deliveries of the #3 SAIC.

For now, BYD is running ahead, with close to a 8.000 units lead, but that shouldn't be enough to keep it in #1 in June, as Tesla is expected to have another deliveries peak in June, replacing the Chinese brand in the podium.

Then in July, BYD should rebound and Tesla loose share, possibly allowing the leadership to change again.

Bring on the popcorn, as the race between these two should continue to be interesting throughout the coming months...

Looking elsewhere, the first half of the table had tittle to talk about, with only BAIC providing some interest, as it is closing in to the #5 Nissan.

The second half is more interesting, with JAC jumping 2 positions, to #11, and the #18 Changan and the #19 Chevrolet(!) also climbing positions.

But the Climber of the Month was the #13 Toyota, that surged 4 positions, thanks to 5.974 units, the brand best result in two years. 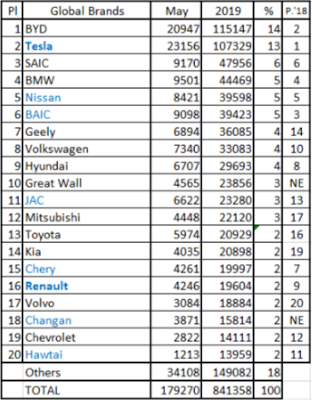 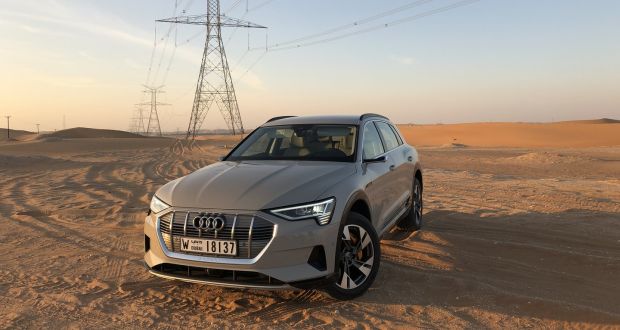 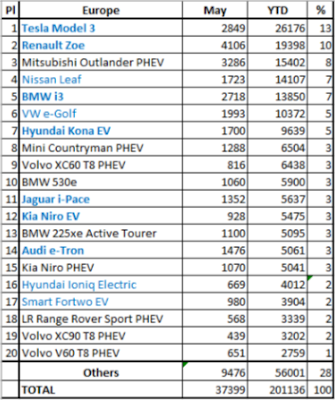 Record month in hot market
EVs in Colombia are picking up charge, with a record 148 units sold last month, with the 440 units of this year just a few units away from beating the 2018 record, so we could see a new yearly record...In June.

Regarding the PEV Share, the 2019 result is now at 0.5%, so Colombia will likely be the first Latin American market to reach 1% share, confirming itself as the most promising plugin market south of the US border.
Looking at the Year Best Sellers, there weren't major changes regarding 2018, with last year winner BMW i3 in the leadership, followed by three times winner (2015, '16 & '17) Renault Twizy, with the last place of the podium belonging to the surprising Mercedes GLC350e, that found a second life in markets outside Europe, namely here.