We start in Sweden, the local plug-in market was up 43% YoY, to 2.785 registrations, with all the hard work being done by BEVs, that jumped three-fold, while PHEVs remain stagnant (-2% YoY), keeping the PEV share at 12%, with BEVs alone having 4,9% share, a big improvement over the 1,2% of last year.

Right now buyers are running away from fossil-fueled vehicles, with diesels at 36% share last month (It had 39% a year ago), but because BEVs are still model/production constrained, it seems many people prefer to buy a PHEV, or wait in line for a BEV, than to buy/lease another ICE-based vehicle.


Looking at last month Best Sellers, the Kia Niro PHEV won its first Best Seller of the Month award this year, with 406 units registered, its best result in 10 months.

Another Kia, the Optima PHEV, closes the ranking, with 196 registrations, most of them station wagons, proving that Tesla's choice for a sedan body for the Model 3 (#4 this month) is costing it sales in Europe.

On the 2019 ranking, there is not much to talk about, on the top positions, the Tesla Model 3 is now looking to keep the 2nd spot from the wheels of the #3 Kia Niro PHEV, now only 141 units behind.

Good news then that June is coming, so expect a Model 3 deliveries peak that will save it from the Korean Crossover ambitions.

The first change in the ranking is the new Volvo V60 PHEV climbing two positions, to #6, thanks to 166 units, while the VW e-Golf was also up two spots, to #17, with 62 registrations, a new year best.

It seems the sunset-mode EV still has some tricks up its sleeve and should continue to provide consistent performances throughout the year.

Outside the Top 20, we should mention the strong start of the new generation Kia Soul EV, with 106 deliveries, while we salute the landing of another high-volume PHEV: The Volvo XC40 PHEV registered its first 6 units.
In the manufacturers ranking, Kia is in the lead, with 25% share (up 2%), with Volvo (16%, down 2%) in Second, followed by Mitsubishi and Tesla, both with 14%, and discussing the last podium seat. 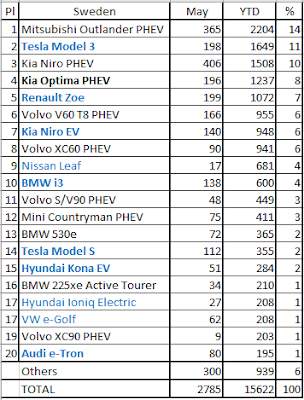 After a thunderous arrival in March, the Tesla Model 3 has lost some space in the midsize car category, falling to #5 on the 2019 category ranking, but with the June peak coming next month, expect it to switch places with the BMW 3-Series and maybe have a shot at displacing the Mercedes C-Class from #3.