At this pace, this market could reach some 7% share by the end of this year and cross the 10% share in 2020. And that’s when things start to get interesting…Maybe it’s still early to say that part of the mainstream market drop comes from the EV Osborne effect, but at this point, I wouldn’t bet against it.


One thing is certain, this is without doubt the most fascinating plugin market on Earth, with several seismic changes happening at the same time, it’s not only the Tesla Model 3 joining the party, it’s also foreign brands scaling up plugin production to meet this year quotas, it’s the local startup companies hitting relevant volumes in the race to survive, all while the local big players race between each other to see who gets to launch more models faster (right now the race is between Geely and BYD, with each launching around 1 new model…per month!), with some of them no longer being BEV conversions made on the cheap, but dedicated EVs, with world class style and specs.

#1 – BAIC EU-Series: The electric sedan scored 7,079 units last month, confirming to be the brand’s main bet for this year. The revised design and improved specs (215 hp, 416 kms / 260 mi NEDC, US $32,500) allows it to remain a popular choice, but with new sedans coming from seemingly every corner of the universe, Beijing Auto’s will soon need to update again the specs, especially when a certain GAC Aion S promises 510 kms / 318 mi NEDC range, for less than $30,000...

#2 – BYD Yuan EV: The Baby Crossover continues on the road for success, with the new 58 kWh version helping to keep the fire alive, so BYD’s star product continues to be delivered at a fast pace, with 6,044 units being delivered in May. With a thousand-long waiting list, demand is no problem, depending more on BYD’s ability/willingness to make them in large volumes (The Tang and Qin Pro are more profitable…), than anything else. With unrivalled specs (58 kWh battery, 410 kms/255 mi NEDC range, 163 hp motor), and price (25,000 USD), this is the year strongest candidate for the Best Seller title.

#3 – SAIC Roewe Ei5 EV: This model was something of a shot in a dark for Shaghai Auto, as station wagons aren’t common in China, but it has paid off, as the nameplate is not only the maker bestselling model, but it had its best month ever in May, with 5,488 units. Based on the GM platform Delta II (think Chevrolet Cruze, Opel Astra, or the Buick Velite 6 sibling), the Chinese wagon profits from a quality design and unique body, compensating the middle-of-the-road specs (35 kWh battery; 301 kms / 187 mi range) and price (213,800 CNY / $33,219).

#4 – JAC iEV E-Series: The city EV is the new star in JAC’s lineup, having registered 4,505 units in May, mostly thanks to competitive specs (42 kWh, 310 kms / 194 mi range NEDC), considering the price (CNY 112,550 / USD 16,300). With a distinctive design (for some reason the front reminds me of a mix between a bulldog and a panda), the nameplate is continuing its brilliant work as the piano-carrier of the Hefei maker.

#5 – Chery eQ: One of the pioneering EV brands, Chery had won China’s Best Selling EV title three times in a row (2011, ’12, ’13), and the automaker regained relevance with the small eQ EV, having registered 3,818 units last month, allowing it to collect another Top 5 position. But the increased competition (JAC iEV E-Series, BYD e1…), might make a dent in the nameplate success, especially considering it has a range (200 kms / 120 mi) that falls well below what the competition (see JAC E-Series) has to offer.


The market is dynamic as ever, with plenty of changes and record results, the most important position change was the Roewe Ei5 EV climbing to #6, with SAIC’s station wagon now looking to reach the #5 Geely Emgrand EV, preferably with another record score.


And in good time that the Ei5 EV is going up, because its stablemate Baojun E-Series is dropping like a rock, having scored just 546 units, losing positions to the #8 Great Wall Ora R1 EV and #9 JAC iEV E-Series, both direct competitors in the race to displace the #7 Chery eQ from the throne of Best Selling City EV.


Great Wall is surely happy with its Ora’s lineup, not only the R1 was up, but the strange looking singular iQ5 EV SUV also climbed one position, to #13.


There were none other than three new faces in the Top 20, with the highest entry being the BMW 530Le, in #17, becoming the highest standing full-size model and the 3rd foreign nameplate in the ranking, together with the #11 VW Passat PHEV and the #18 Tesla Model 3, this being the first time that 3 foreign nameplates appear on the Chinese Top 20.


The Xpeng G3 EV, from the startup Xiaopeng, also joined the Top 20, in #19, surpassing at the same time the other local startups, Weltmeister and Nio, although this last one is keeping the best-selling full-size SUV title, with its ES8 SUV in #21, and with its smaller (and cheaper) SUV ES6 landing in June, expect Nio to recover the Best Selling Startup title soon.


The final entry in the ranking is the BYD Qin Pro EV, with the midsize sedan scoring a record 2,936 units. Interestingly, the other two additions to the ranking also did it with record performances, with the Xpeng G3 doing it with 2,704 units and the 530Le with 2,878.


Despite this record performance, the Bimmer wasn’t the best selling foreigner last month, and it wasn’t the Passat PHEV (3,293) either, but the Nissan Sylphy EV, that came out of nowhere to score 3,335 units in May, if the Japanese sedan manages to keep the pace in the coming months, expect another foreign nameplate in the Top 20 soon… 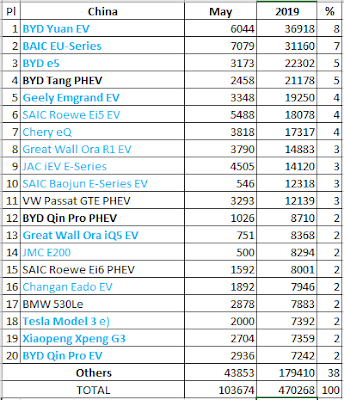