During the first half of 2017, 1668 electric vehicles were registered, which is 165% more than in the same period last year, pulling the EV Share to 4.5%, one of the highest in the World. 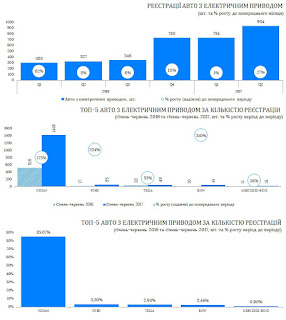 http://itc.ua/news/v-pervom-polugodii-2017-goda-v-ukraine-zaregistrirovali-1668-elektromobiley-chto-na-165-bolshe-po-sravneniyu-s-proshlyim-godom/
When i asked the reason for Ford's popularity in this market, my source gave me the following explanation:


"In principle, the focus electro is the same price as the Nissan Leaf.

But it has an active system for cooling / heating the battery. And the battery power and engine power at Ford is higher and the dynamic performance is better. In addition, the external appearance of the Ford Focus electric almost does not differ from the gasoline model. In addition, the availability of spare parts from gasoline fords (which on our roads is sufficient) plays far from the last role."

Email ThisBlogThis!Share to TwitterShare to FacebookShare to Pinterest
Labels: Ukraine