Renault Zoe is the new #1

Will we see Europe's plugin market share end 2020 in two digits? Now THAT would be something to write about...

With May representing a transition month, as supply chains recover from the lockdowns, the Renault Zoe was last month Best Seller, profiting from the lack of fresh units of the Tesla Model 3, that limited the sports sedan performance in May.

Interestingly, we have a 100% Top 5 in May, this being only the second time it happens this year.

Looking at May Top 5 Models:

#1 Renault Zoe – The 3,712 deliveries in May signals the return to form from the French hatchback, with the Renault EV winning its 3rd Best Seller award this year (the first having been January and February), with the main markets being France (1,165 units), Germany (896) and Italy (524). For the coming months, expect the Zoe to continue sharing the next 3 Best Seller trophies with the Tesla Model 3, until September, when a certain VW ID.3 lands...

#2 VW e-Golf – The evergreen e-Golf won its second silver medal this year, scoring 2,488 units last month, the veteran model demand continues immune to the long shadow of the ID.3, with Volkswagen milking everything it can from it, at least until its successor effectively lands, next September. Regarding May, the e-Golf main markets were Germany (1,153 units), Norway (610) and the Netherlands (221).

#3 Tesla Model 3 – Limited by the lack of fresh units, the electromobility posterchild performance this time was limited to just 2,278 deliveries, ending the month only in 3rd. Expect the Californian to go after the Zoe in June, thanks to fresh units coming from the US. Back to May, the UK was by far the best market for the Tesla nameplate, with 852 deliveries, followed by Germany (244) and France (219).


#4 Hyundai Kona EV - The Korean electric crossover was an immediate hit among European buyers, that caught Hyundai completely off-guard ("now, where will we find batteries for all these orders?!?"), originating thousands-long waiting lists, and limiting the success of the Kona EV to just 7th in 2019. With Hyundai now making the Kona EV in Europe (in Nosovice, Czech Republic) and the battery strain now solved, registrations are already jumping, to 1,824 units, allowing it to win its first Top 5 presence in 2020, with its main markets being Norway (443 units), Germany (371), France (351) and the Netherlands (212). With several thousands of orders still to be satisfied, Hyundai is now determined to end it, so expect the Korean crossover to become a familiar face in this Top 5 during the coming months.

#5 Audi e-Tron – The big Audi continues to impress, with May registering 1,687 units, although one wonders for how long can Audi keep the e-Tron pace at this level, considering that these uncertain times aren't the best for models nearing six-figure prices. This time the biggest market for the German crossover was Germany, with 583 units, with the usual bread and butter market, Norway, now being relegated to 2nd, with 579 units, with the UK following, with 200 units registered.

Another relevant position change was the Audi e-Tron climbing to 4th, surpassing the previous SUV default choice, the Mitsubishi Outlander PHEV, and the Japanese SUV might lose more positions soon, as the Nissan Leaf is just 408 units behind.

In the second half of the ranking, we should mention that the Kia Niro EV was up one spot, to #13, while the BMW X5 PHEV climbed to #16.

We have two (not so) new faces in the table, with the Mercedes E300e/de family returning to the Top 20, in #19, while the veteran Audi A3 PHEV is experiencing a second youth, returning to the table after a two year absence.

Outside the Top 20, the Ford Kuga PHEV (euro-spec Ford Escape), scored an amazing 1,620 units in May, becoming May's Best Selling PHEV, and we should see it soon in the table, becoming Ford's first model in the Top 20 since...well, ever!

In the brands ranking, we have the most balanced race in the history of this ranking, with Tesla (9%, down 1%) hanging on to the throne, slightly ahead of Volkswagen and Renault, both having 9% each, while BMW (8%, down 1%) is running slightly behind, so we currently have four manufacturers running for #1...Now, that's what i call an entertaining race! 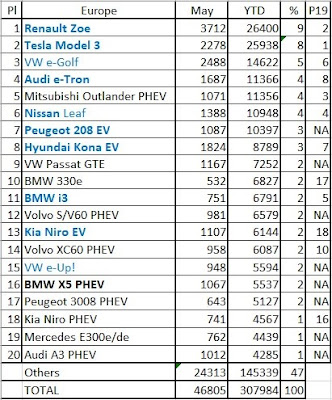 Tesla's midsizer sales are in another galaxy, and won't have significant competition until next year, as the Polestar 2 will remain a niche player and once the BMW iX3 lands, the German maker would already be happy if it got a third of sales of the current Model 3.

As for the remaining podium, the Jaguar i-Pace is still #2, but has seen its sales drop by 45% YoY, but it was still enough to beat the #3 Mercedes EQC in May (401 units vs 333), so Mercedes needs to ramp up production even further, if it wants to beat the Jaguar and reach Silver.

The e-Tron recent domination of the segment is proof that Teslas aren't unbeatable, you just need competitive products to get there.

Your turn, Tesla. And while cutting prices and incremental range updates will surely help, what we all want to see is some love on both Model S & X, revamping the design, inside and out, while keeping the 100 kWh battery with a low price, and adding a new 120 kWh version...Call it Plaid, Battlestar Galactica (my favorite), or whatever you wish to call it...But make it.

As months pass by, the competition becomes stronger, last month the six-figure (and still ramping up) Porsche Taycan surpassed the Tesla Model S, with the German Sports Sedan doubling the registrations (500 units in May) of the Tesla flagship (246).