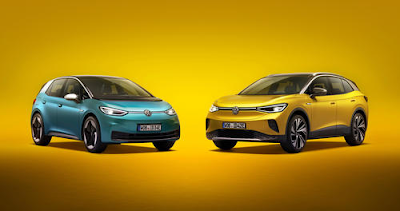 And in a regressing market (-19% YoY), while petrol (-41% YoY) and diesel (-35%) are falling off a cliff, every electrified category is seeing growing sales, not only the aforementioned BEVs and PHEVs registrations are surging, but even plugless hybrids (HEV + MHEV) are growing, albeit at a slower pace (+42%). 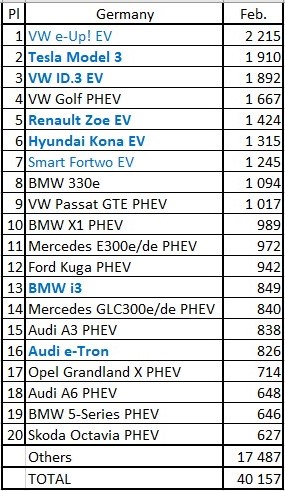 Looking at last month Best Sellers, in February we had a surprise winner, with the tiny VW e-Up beating the usual front runners, by registering 2,215 units, a new personal best for the veteran model (VW's city car is on the market for 10 years now, and its EV version exists since 2013), while on the remaining podium places, we have the Tesla Model 3 in 2nd, surprisingly beating the VW ID.3, that due to a meh! February performance, with just 1,892 deliveries, was relegated to the last place of the podium.
Below the podium Top Sellers, the 4th place went to another Volkswagen, with the new Golf PHEV winning the Best Seller award in the PHEV category, and making 3 Volkswagen's in the Top 4, while last year Best Seller had to settle with the 5th spot, closely followed by the #6 Hyundai Kona EV.
The Smart Fortwo EV is the 6th BEV in the Top 7, but below it, it's a sea of PHEVs, with the only exceptions being the #13 BMW i3 and the #16 Audi e-Tron, which kind of reflects one if the current market trends, while the BEV market is concentrated (almost literally) in half a dozen models, the models choice in the plugin hybrid field is far greater and spanning through much a wider type of customers and needs, leading to a more diversified market.
Outside this Top 20, a mention to the 463 units of the Fiat 500e, while the Audi e-Tron GT landed with some good numbers (212 registrations), as it looks to give a run for its money to the stable mate Porsche Taycan, that currently leads the full-size car BEV category. 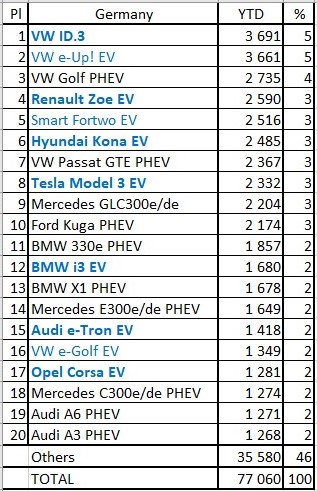 Regarding the 2021 table, we now have a 1-2-3 lead from Volkswagen, with the ID.3 (barely) leading the table, with 3,691 units, just 30 more than the small e-Up, while the VW Golf PHEV now closes the podium.
After the Volkswagen armada, several of last year front-runners took the time to recover from a slow January and prepare themselves for the Best non-Volkswagen trophy, that title is currently in the hands of the #4 Renault Zoe, but the #8 Tesla Model 3 should profit from another strong month in March and surpass the French hatchback by the end of the quarter.
Speaking of Volkswagen, the Wolfsburg maker has 1-2 leads on both BEV and PHEV categories, with the first being made by the ID.3 and e-Up, while the second have the Golf PHEV and Passat PHEV as actors. So it's official, this market has become Volkswagen's turf.
On the second half of the table, the BMW 330e jumped two spots, to #11, and is now the Best Selling BMW, while on the Audi side, a lot of changes have occurred, if the Q5 PHEV has left the table, 3 Audi's have joined it, with the e-Tron leading the pack, in #15, only 231 units away from the Mercedes E300e/de, so we might see a leadership change next month in the full size category.
Highlighting the good moment of the VW Group, besides the 5 Volkswagen's in the Top 20 (yep, the e-Golf is still running...), and the 3 Audi's, in #21 we have the Skoda Octavia PHEV, with 1,265 registrations, so expect the popular Czech model to join the table soon.
In the brands ranking, Volkswagen (19%) is clearly leading its home market, followed by Mercedes (10%) and BMW (9%), while #4 Audi (8%) is not far away.
Further behind, #5 Renault and #6 Smart, both with 4% share, seem unable to threaten the grip that the local heroes have on the German plugin market.
Unsurprisingly, this positioning clearly mirrors the mainstream German market, where Volkswagen clearly leads (20% share), followed by Mercedes (10%), BMW (9%) and Audi (8%), this is a trend that should become more visible as more and more plugin markets merge with the mainstream: EV sales trends will start to follow the more mainstream tastes, changing according to each market preference, becoming harder for a given model to be #1 everywhere.
Published by José Pontes at March 15, 2021