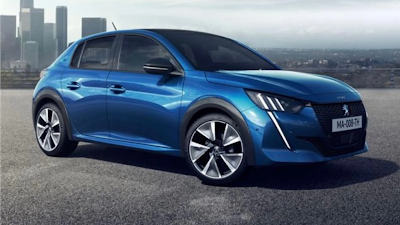 If the overall automotive market continues suffering from the Covid-related pandemic (-21% in February), plugin sales remained positive, with PHEVs on the rise (up 134%, to 9,097 units, allowing them to have a 52% share among plugins last month, not far from the 56% peak of January, the BEV recovery regarding the previous month is due to a less horrible month from pure EVs, that were down in February by just 11%, a marked improvement from the steep 41% drop of January. Still, the French market is known to be BEV-friendly, so fully electric models will likely recover as the year advances.

Regarding the plugin share, last month it reached 13% (6.3% BEV), keeping the YTD share at 12% (5.8% BEV), and if we were to add the plugless hybrids to the tally (HEV and MHEV), then the electrified share of the French market would hit 31%(!), as plugless hybrids hit an amazing score of 18% in February, true, most of it is due to mild hybrids, but still, this meant that petrol vehicles saw their share being reduced by 5% in February, to 44%, compared to the same month last year, but more shocking is the 9% reduction of the diesel share in only 12 months, with the black fuel now having only 25% of the (once diesel-addicted) French market...
At this pace, diesel will be mort here by 2024... 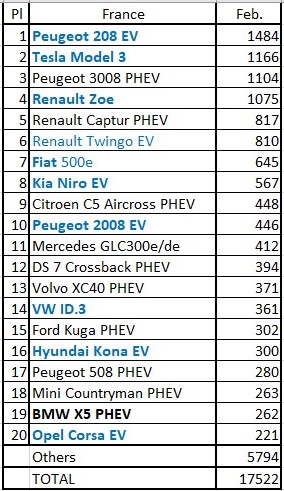 Looking at last month Best Sellers, a lot is going on in the top spots, first the Peugeot 208 EV had its first two win streak in this market, after winning in January, the Stellantis EV did it again in February, but the biggest surprise comes in 2nd, with the Tesla Model 3 winning Silver, with 1,166 deliveries, its best off-peak score ever in France, which could mean that the sports sedan might be headed for a record performance in March (1,500?), and a possible monthly win in France, which would not only be its first in this market, but also the first time a foreign model would take that honor...

The last place of the podium went for the Peugeot 3008 PHEV, with 1,104 units, thus making two Peugeot's in the podium, but also securing the BEV and PHEV monthly wins, beating the Renault arch rival in both categories...
Speaking of Renault, its Zoe best seller was relegated from the podium, for the first time since 2012(!), ending February in 4th, ahead of the #5 Renault Captur PHEV (that lost the PHEV category to the aforementioned Peugeot 3008 PHEV) and the #6 Renault Twingo EV, that saw its Stellantis rival (Fiat 500e) ending in 7th, so Renault now looks to be surrounded by a Stellantis model assault (with a certain Tesla cowboy helping along) and with little help from their Group companions (there are no Nissan's or Mitsubishi's in the Top 20), it seems Renault is destined to lose its decade-long grip of the French market, and a new cycle is set to start.
Another example of the broad appeal that the Stellantis (looong) lineup has, is that the Conglomerate has 8 models, from 5 different brands, in this Top 20. Impressive, eh?
Elsewhere, a mention to the good score of the Mercedes GLC300e/de, with 412 registrations, while the VW ID.3 showed up in (a still discreet) #14, and the Ford Kuga (euro-spec Escape) PHEV returned to the table in #15, thanks to 302 registrations, its best score since July, so it seems the battery issues are now a thing of the past and the Ford crossover is back on its feet. 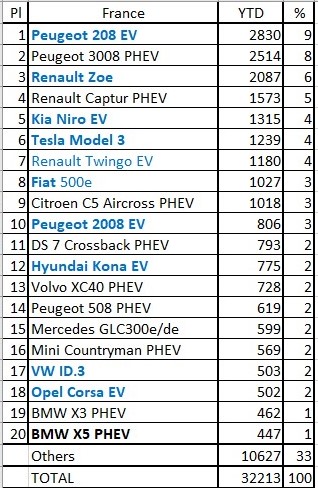 Looking at the 2021 ranking, we have two Peugeot's ahead of two Renault's in the top spots, confirming the disruptive times in this market and the end of a cycle.
But the Climber of the Month was the Tesla Model 3, that jumped into #6, and should jump higher next month, possibly to 4th.
In the city car category, the #7 Renault Twingo EV and #8 Fiat 500e are separated by just 153 units, so this category is starting to look like an entertaining race to follow throughout the year.
On the second half of the table, we now have the VW ID.3 in #17, while the BMW X5 PHEV is now #20, having surpassed its Mercedes GLE350e/de rival, but has the rising #21 Ford Kuga PHEV just 3 units behind, so BMW's yacht will probably disappear from the table next month.
Looking at the manufacturers ranking, the new leader Peugeot dropped 2% in share, to 22%, but it is enough to stay ahead of the runner-up Renault (16%), while Kia (6%, down 1%) keeps its 3rd spot, ahead of Citroen, Volvo and Tesla, all with 4% each.
As for OEMs, Stellantis is now the major force here, with a commanding 35% share, with the Renault-Nissan Alliance far behind, with only 17%, while the best foreign OEM is  Hyundai-Kia, with 9% share.
The Stellantis Group is starting to become a force to be reckoned, betting on a broad lineup, distributed by its 106 brands, that is not dependent on the behavior of a single model and allowing it a massive scale, that will help it play relevant roles in several major markets, with the exception being Asia, and most specifically, China, where they lack a competitive local associate.
With the French and Italian markets now in the bag, and Opel regaining some relevance in its native Germany, the only domestic market left for the Stellantis conglomerate to make their mark is the USA, where Jeep (upcoming Wrangler PHEV, future Wrangler EV...) seems to spearhead the Group efforts (now, about that Ram EV...), but for now, the American arm of Stellantis seems to be the laggard among the Detroit Big 3.
(Well, not long ago, Renault seemed unbeatable in France...)
Published by José Pontes at March 10, 2021