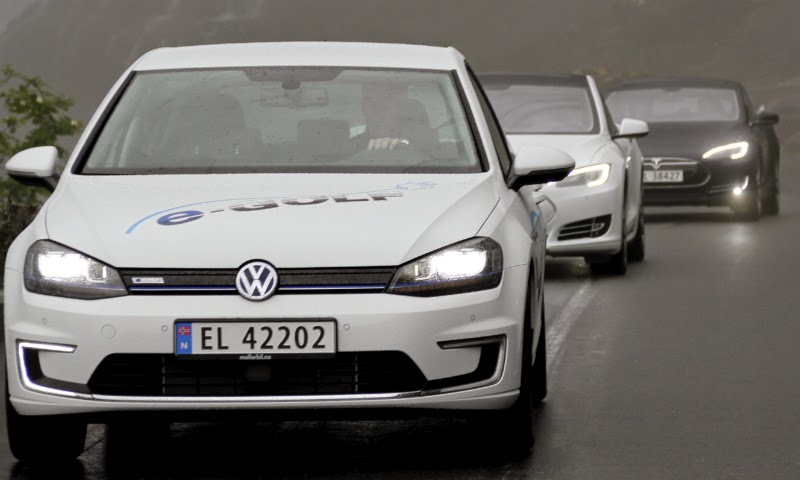 Just like in a Fringe episode, if in the PHEV capital of the world, Amsterdam, there was a surge in sales this January, in Oslo, BEV capital, there was also an unexpected rise in sales, with a plug-in VW Golf rising to #1 in both markets. But looking with closer attention, there are differences, while in the Dutch market the sporty Golf GTE steals the show, in Norway it's the more moderate e-Golf calling the shots, with an amazing 879 units, the best result for a single model since the historic performance (1.493 units) of the Model S last March, this result is due to VW (finally) realising that it would be nice to sell the e-Golf with a heatpump in a country like Norway, now equipped with that important element, the e-Golf sales have surpassed those of the regular ICE Golf, reaching for the first time the #1 in the General Ranking and recovering the EV leadership for the first time since August '14.

Speaking of the general performance, there were 2.241 EV's sold, the best result since March, with the EV Share shooting for 21,30% (And 18% Share for BEV's), a fantastic improvement over the previous year (14%), with electric cars already dominating the City-car segment, with the Top 3 (e-Up!, I-Miev and Peugeot iOn) belonging to the EV Cause.
Looking elsewhere, the Leaf had a disappointing month, selling only 309 units, its worst performance since July '13, reaching only a #7 in the General Ranking, Tesla is suffering from deliveries constraints (Only 71 units) but still enough to outsell (By one unit...) the BMW 5-Series, its closest rival in the large sedan (E-Class) segment.

The Mitsubishi Outlander PHEV sold a surprising 270 units, its personal best in Norway, granting it the Third Spot on the plug-in ranking and the Second Spot on the SUV's chart, behind the Toyota RAV4. Kia repeated a Top 5 appearance, with 105 Soul's, outrunning (again) the BMW i3 in the compact crossover-thingy race.

Final mention for the good reception of the Audi A3 e-Tron, with 54 units, already the Second Best-Selling PHEV in this market.

Looking at the manufacturers ranking, Volkswagen owns almost half of the market (47%, to be more precise), outselling Mitsubishi (16%) and Nissan (14%). With the arrival of the improved e-Golf this January and the Golf GTE version coming in February (And don't forget the Passat GTE coming later in the year), the german carmaker looks more and more the ruler of this market. Just to make things perfect, they could launch a e-Tiguan or a GTE version of its CUV...