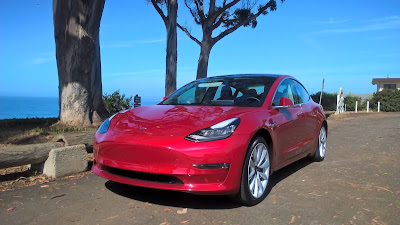 This positive result is placing the 2018 numbers at over one million units (+69% YoY), with the global PEV share standing at a record 1.7% share, which still makes realistic the prospect that this year we will hit two million units (and over 2% share).

August was all about the Tesla Model ,3, with the Californian maker pushing up the production rate, resulting in a record 17,900 units being delivered to customers, breaking the previous all-time record, in the hands of the BAIC EC-Series, while allowing it to finally suprpass the Nissan Leaf and hit the Number One position in the yearly ranking.

Speaking of the EC-Series, the production of the new EC3 has already started to gear up, with September said to be already in full speed, although rumours say that BAIC's little EV won't surpass last year sales lever, which could mean that the Nissan Leaf might still have a shot at #2.

Bring the popcorn in Q4, as  we could see an entertaining race between these two in the race for Silver during October, November & December...

Still regarding Tesla, the older two siblings, the Model S and X, had their best mid-quarter performance ever, so expect both also to shine in September...

But the true surprise was the Geely Emgrand EV stroming through the Top 20, into #16, thanks to 4,647 units, the nameplate's best result since 2016...The wonders of increased range!

Looking at the BEV / PHEV breakdown, pure electrics have grown their share by 1%, to 64% of the total market, mostly thanks to the Model 3, and expect this score to be improved  even further during the year, possibly to levels above the 65% share of 2017. 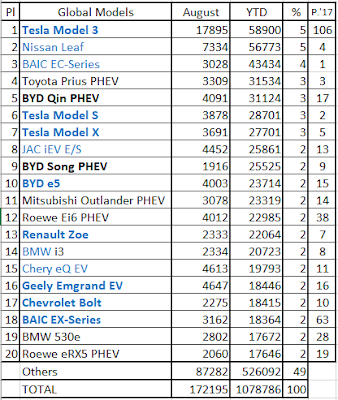 Manufacturers: Tesla continues on a record streak
August saw Tesla break once again the all-time record, with over 25,000 deliveries in one month, thanks to the Model 3 deliveries, allowing the brand to distance itself from BYD, with the Chinese maker also  hitting record levels, with over 20,000 units.

With both brands now hitting unseen sales levels month after month, there is no question on who will be in the first two positions, and with Tesla apparently ramping up production faster than BYD, it all points out that the US brand will finally win the Manufacturers title, after 10 years on the market.

Coming down from Outer Space and back to Earth, there aren't significant changes at the top, with #3 BAIC keeping na eye on the Fourth Placed BMW, while Roewe secured further its Fifth Position.

Below the Top 10, Geely was the Climber of the Month, thanks to a record 8,088 registrations, jumping six(!) positions to #13, while Hawtai (5,683 units, new PB) continues to climb positions without anyone noticing, this time it is #14, rising two places.

A final reference to Kia, that with 3,893 deliveries, had its best month ever. 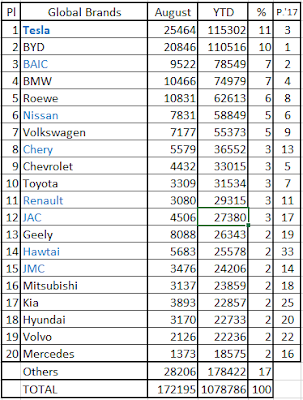