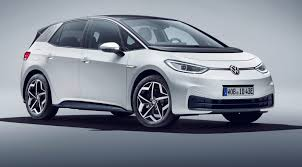 The German automotive market has opened the flood gates to plugin vehicles, with December setting yet another record month, with a little less than 83,000 units, PEVs scored an amazing 27% share (14% BEV) in December, making Germany the largest PEV market outside China, beating even the USA by a wide margin (394k vs 330k)...

In a completely disrupted market, while diesel (-31% YoY) and petrol (-20%) were down in December, all electrified categories were shooting up, with HEVs up 133% YoY, while PHEVs jumped six-fold(!), and BEVs did even better, jumping 7-fold(!!!), with the end of 2020 becoming a stampede into electrified vehicles, we have to the point where, despite tanking Fossil Fuel sales, electrified sales allowed the overall market to actually grow 10% YoY in December!

Now, how much of these events are related to last minute compliance of the EU's CO2 emission rules, it's anyone's guess, but regardless of this, it is proof that regulations do work and when pushed, Legacy OEMs are indeed able to comply.

The supreme irony of this, is that by forcing local OEMs to move fast into electrification in order to comply with the CO2 emission targets, EU politicians might have saved the local automotive industry from a future death at the hands of Tesla and Chinese OEMs...

But leaving political considerations apart, after all this isn't Politico, and back at the German PEV report, the 2020 tally ended at 14% (6.7% BEV), so expect 2021 to continue with the current disruption, with plugin share above 20% for plugins and BEVs hovering above 10%. 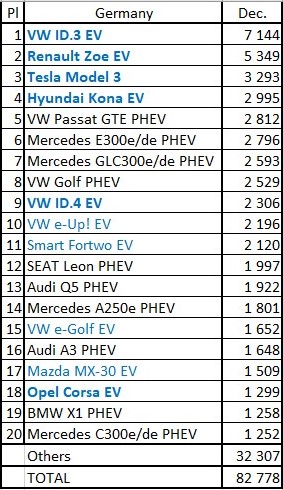 Looking at last month Best Sellers, in December the VW ID.3 was back to #1, with an all-time record to boot (7,144 units), allowing it to reach the 3rd spot in the overall market, with the German hatchback finally reaching the volumes people expected from it, the next question now is: Will it keep up? Will it be be able to keep sustaned Top 5 scores in the overall market? Discuss.
Despite the Renault Zoe being relegated to the 2nd spot, the truth is that Renault had plenty to celebrate, not only it scored another record performance (5,349 units), but the small hatchback was #6 in the overall market, being also the best performing "true" foreigner (the Skoda Octavia was #4, but belonging to the VW Group, one can't really consider it a foreigner in Germany...), and being a French model, it is even more extraordinary, as it is well known the problems that French models have in succeding on the other side of the Rhine...As Renault found by chance the Magic Potion for future success?
In a Top 10 where ALL models had record performances, one should highlight the Tesla Model 3 crossing North of the 3,000 units mark for the first time, with the Hyundai Kona EV almost doing the same (it had 2,995 registrations), while in #9 and #10, we have two very different Volkswagen BEVs: The brand new ID.4 crossover landed in #9 in its first full month on the market, with 2,306 units, while the veteran e-Up city car scored a record 2,196 units, that added to the 646 units of the twin Skoda Citigo EV and 382 of the SEAT e-Mii EV, we have the triplets reaching an amazing 3,224 registrations, which would place them in 4th! Not bad...
This highlights another great month for Volkswagen, which placed 5 models (ID.3, Passat, Golf PHEV, ID.4, e-Up) in the December Top 10, with 4 other belonging to the Group (Seat Leon, Audi Q5 and A3, and the not-yet-dead VW e-Golf) in the Top 20!
Other relevant performances regard the Daimler Group, placing 5 models (Smart Fortwo, Mercedes A, C, and E-Class, and the GLC SUV) in last month Top 20, 3 of them with record scores (GLC300e/de, C300e/de and E300 e/de), while below the Top 20, the three-pointed-star maker had 3 other models (EQC - 866 units, EQV - 648, GLA250e - 714) hitting relevant records scores...Now, that is what i call a production ramp up!
In such a high volume month, record scores were plenty, with three quarters of the models on this Top 20 table having best ever performances, besides the aforementioned, we should also highlight the surprising score of the Mazda MX-30, with 1,509 deliveries...Or is it, self registrations? Mmmm...
Outside this Top 20, we had more relevant performances, like the 719 units of the fresh Fiat 500e, that had its first full month in December, or the 963 units of the Nissan Leaf, a new record(!) for the veteran model, so the current EV fever is strong enough to pull the boats of all models, even of 10 year old ones...Interestingly, its Alliance partner Renault is already starting to get significant volumes from models other than the Zoe, with the small Twingo EV scoring 917 units in only its second month on the market, while the Captur PHEV had a record 806 deliveries in December.
Finally, the Volkswagen Group is ramping up another future Best Seller, with the Skoda Octavia PHEV registering 990 units in only its 3rd month on the market. 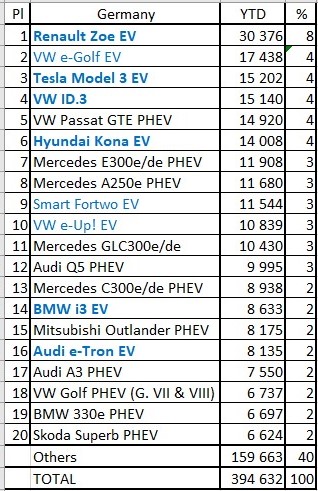 Regarding the final 2020 table, and comparing with the 2019 result, the most immediate thing that appears before our eyes, is that the market has diversified significantly, if in 2019 we had 8 models with 5% share or more, now we only have one, the Renault Zoe, and for that to happen, the French hatchback had to triple(!) its sales YoY...
This is a sign of a maturing market, as plugin markets leave their niche spaces and merge with the overall market, as more choice equals more diversity and therefore, lower shares of the total plugin market for the Best Sellers. Expect this rule to happen in more countries with high plugin shares.
Looking at the podium positions the leader Zoe won another Best Seller title in Germany, its 3rd in a row (and last?), while the VW e-Golf ended its career with a bang, with a Silver Medal, and the Tesla Model 3 managed to resist the VW ID.3 and keep the Bronze medal it had earned in 2019.
Still, having jumped from #11 to 4th in December, and missing the podium by just 62 units, one can say that the VW ID.3 had a good month, as the German hatchback real task starts in 2021, as it is expected to become the 2021 Best Seller (anything less and Herbert Diess will have a big headache...) in Germany.
There were other last minute changes, namely in #7, with the E300e/de full size model climbing one position and confirming itself as the default full size plugin choice in this market, something that surely provides good signs for the upcoming Mercedes EQS and EQE.
Speaking of Mercedes, the three-pointed-star maker had another model climbing in the table, with the GLC300e/de going up to #11, ending as the 2020 Best Selling SUV. Expect the Tesla Model Y to draw a big target on the Merc GLC back...
The BMW i3 was up to #14, but even so, that paled with the runner-up spot it had in 2019, despite dropping just 9% in registrations, stagnant sales in a booming market quickly make a model irrelevant, and the Mitsubishi Outlander PHEV can agree with that, from #4 and Best Selling PHEV in 2019, the Japanese SUV fell into #15 and ended more than 6,000 units behind this year Best Selling PHEV, the VW Passat GTE, all this despite seeing its sales grow by 8%.
Anyway, highlighting the good moment of the VW Group, the new generation allowed the Audi A3 PHEV nameplate to climb to #17, while the VW Golf PHEV also benefited from the new Generation to rejoin the Top 20, in #18.
Expect both models to become familiar faces in the 2021 table, with the Volkswagen PHEV in particular hoping to run for the category Best Seller trophy.
In the brands ranking, the leader Volkswagen (17%, up 1%) won this year title, finally beating BMW, while Mercedes (14%) won Silver.
Audi (9%) resisted a rising Renault (8%) and kept the last place of the podium, while last year Best Selling maker, BMW (6%, down 1%) this time was only 5th...From 22% in 2019 to 6% in 2020....Auch!
Published by José Pontes at January 18, 2021