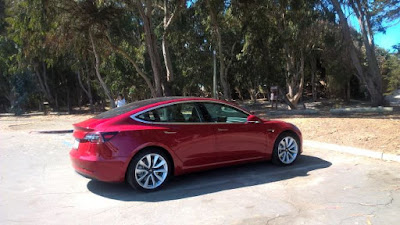 The European passenger plugin market continues on the rise, having registered over 227,000 units in March (+169% YoY), placing last month plugin share at 16% share (7.6% BEV), pulling the 2021 PEV share to 15% (6.6% for BEVs alone).
This time growth came from both fields, with BEVs doubling their sales year-on-year, but PHEVs continue surging at a faster pace, having seen their sales jump by 264% YoY last month, confirming plugin hybrids as the major growth source for plugins in the first months of 2021.
With a higher than expected end-of-quarter peak, the Model 3 won its second Best Seller title in a row, confirming its good form this year.
The same can't be said about the remaining 2020 podium bearers, as that year winner Renault Zoe was only 4th in March, while the VW ID.3, Bronze medalist last year, continues to underperform, reaching a low 6th place last month...With VW's hatchback faltering, all eyes are now on the new ID.4 crossover, that had its first real deliveries month in March, ending the stage in #5, already above its slightly older (and shorter) sibling. A sign of things to come?
Looking at March Top 5 Models:
#1 Tesla Model 3 – The sports sedan returned to form, by delivering 24,184 deliveries last month, a larger than expected high tide, allowing it to register 4 times more units than the runner-up Hyundai Kona EV. Regarding March, the Model 3 hade several 4-digit scores, namely in the United Kingdom (6,500 units), France (4,524), Germany (3,699), Norway (2,169), Italy (1,363) and Sweden and Austria, both with 1,192 units each.
#2 Hyundai Kona EV – The Korean crossover is already recovering from the pull forward stunt of the last months of 2020, something that others can't say the same, with the Hyundai EV reaching the runner-up place in February, no doubt thanks to its competitive range vs price ratio, with the distinctive crossover scoring 5,643 deliveries last month. In March, Germany was by far the best market for the Hyundai nameplate, with 3,237 deliveries, followed by the United Kingdom (800 units), France (409) and Norway (349).
#3 Volvo XC40 PHEV - The smallest of Volvo's PHEV lineup is now the the continent's favorite PHEV, as the Swedish carmaker sees their plugin hybrid versions as just another trimline in Europe, facilitating sales, especially of the XC40, that sits at the heart of the hot compact SUV category. In March, the Belgian-built Volvo scored 5,567 registrations, earning its 3rd Best Selling PHEV title in a row. The markets where the Volvo plugin was in high rotation were Sweden (1,192 units), the United Kingdom (900) and Germany (624 units). Without production constraints and currently experiencing strong demand, the compact Volvo is a strong candidate for the 2021 PHEV Best Seller title.
#4 Renault Zoe – The 5,482 deliveries number show that the French hatchback is yet to recover from the last year end peak effort, having seen its registrations drop by in two digits last month, an even more worrying event, when we consider the context of doubling sales in the European BEV market. In any case, the main markets in March were the usual, with Germany (1,692 units) leading, followed by France (1,519), while Italy (721), was a distant 3rd.
#5 Volkswagen ID.4 – Sitting in the vortex of the current hottest trends (Plugins and compact Crossovers/SUVs) much is expected from the new Volkswagen, especially considering that its ID.3 sibling hasn't really set the market on fire...The ID.4 doesn't have much margin for failure, so it was good to see it start its first real deliveries month in 5th, just 500 units behind the runner-up Hyundai Kona EV. With the ID.3 failing to run at the same pace of the Tesla Model 3, now its up for the ID.4 to save VW's honor in Europe. But back at last month performance, the German EV registered 5,104 units, with the biggest market being its homeland Germany, with 872 registrations, followed by Norway, with 856 units, and the United Kingdom (500). 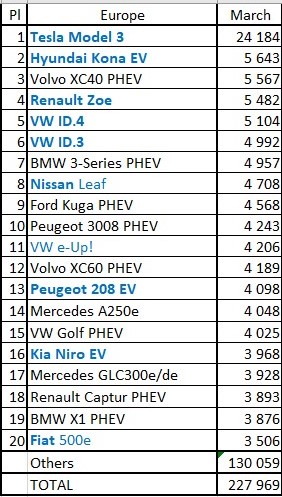 Looking at the remaining March table, besides the disappointing performance of the VW ID.3, the highlights regard several record performances on the table, like the #7 BMW 3-Series PHEV scoring a record 4,957 units, the #10 Peugeot 3008 PHEV hitting a record 4,243 registrations, while the veteran VW e-Up hit a record 4,206 units, an amazing performance for the small EV, that can only be explained by the lower than expected sales of the ID.3, that is forcing the German maker to increase production of the cheaper (and less profitable) e-Up.
Still on the subject of record performances, and highlighting the great moment of Volvo, the XC60 PHEV scored another record score, with 4,189 units, slightly ahead of another record performer, the Peugeot 208 EV (4,098) and the #19 BMW X1 (3,876).
A mention also to the Nissan Leaf, that thanks to heavy discounts of its 62 kWh version, has jumped to 8th last month, with 4,708 units.
Outside the Top 20, a mention to the Toyota RAV4 PHEV, with the Japanese maker continuing to ramp up the deliveries of its RAV4 PHEV model, reaching 2,575 units last month, a new record for the Japanese SUV and the same number of units registered as the Peugeot 2008 EV, with the French crossover apparently still in (slow) production ramp up. The Mini Cooper EV scored a record 3,324 units performance.
Finally, an interesting fact, if we sum all VW Golf cousins PHEV sales together (Seat/Cupra Leon + Skoda Octavia + Audi A3), we get almost 10,000 units, which added to the VW Golf PHEV registrations, we would reach some 14,000 PHEVs on these compact cars alone. 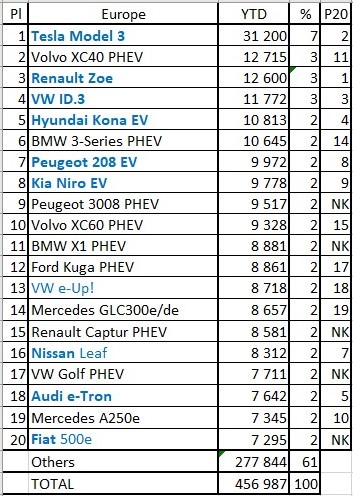 Looking at the 2021 ranking, the main news was the Tesla Model 3 shooting for Number One, with the sports sedan having almost a 20,000 units lead over the #2 Volvo XC40 PHEV.
And with the remaining last year Best Seller competitors underperforming, the Renault Zoe is down 39% YoY, while the all-new VW ID.3 is just 12% above what the then veteran e-Golf had 12 months ago, one can already say that this Second Quarter will be a stroll around the park for the sports sedan, possibly securing enough advantage over the competition to allow it to manage a demand defection to the Tesla Model Y or volume surges in the competition tallies, now being the main favorite to win the 2021 Best Seller title in Europe.
But the Climber of the Month was the Hyundai Kona EV, that jumped 5 spots, to #5, with the Korean crossover now ambitionin a podium seat.
The BMW 330e also had a good month, climbing to 6th, but year-to-date, the BMW midsizer has about a third of the Tesla Model 3 sales, which says a lot about the impossible uphill battle that the future BMW i4 will have to face...
On the second half of the table, the small VW e-Up continues to climb in the ranking, it's now in #13, just one position below another rising model, as the Ford Kuga PHEV (Euro-spec Ford Escape) jumped from #16 to #12 in March.
We had three models returning the table in March, with the most surprising being the Nissan Leaf, up to #16, while the VW Golf PHEV was up to #17 and the Mercedes A250e, last year Best Selling PHEV, jumped to #19.
Unlike the models ranking, where we already have a clear favorite, in the makers ranking, balance is the word, with the 3 top brands separated by just 700 units, as Volkswagen, Mercedes and BMW all have 10% share, with the Wolsburg brand currently on top, but the differences are so small that anything can happen.
Below these three we have the #4 Volvo, with 8%, followed by Tesla (7%), while in tied in 6th, we have Peugeot and Renault, both with 6% share, with the first currently having a 34 units advantaged over its arch-rival.

Tesla's midsize sedan lives in another galaxy, having won a sizeable distance over the competition, and has seen its sales increase 47% over the first quarter of 2020, highlighting the fact that it won't have significant competition in the next few months, as the Tesla Model Y will only land in the second half of the year.
The Mercedes EQC (2,131 units last month) recovered the second spot, having surpassed the Polestar 2 in March, with the Sino-Swede now being some 400 units behind the Mercedes SUV (4,194 vs 3,792).
So far, the only other significant midsize BEV was the Jaguar i-Pace (792 units in March), but the BMW iX3 has finally started to be delivered in volume, with the midsize BMW delivering 566 units last month.
Will we see it surpass the Jaguar in the next couple of months?

The e-Tron domination is unquestionable but its seemingly never ending growth seems to have finally stopped, with the Big Audi current 7,642 units representing an 8% sales drop YoY, but despite this, the Audi SUV seems destined to win another category title this year, with Tesla basically giving up on the Model S & X for the first half of the year, what they will recover in the second half of the year, shouldn't be enough to compensate for the drought in the first half, while the #2 model, the Porsche Taycan (1,778 units last month) is too niche to go head to head with the e-Tron in the sales charts.
Regarding the remaining competition, the Mercedes EQV Luxury Van is still in 3rd place, with 431 units, 41 more than the Audi e-Tron GT, but shouldn't be here for long, as the Audi e-Tron GT production ram-up should allow it to reach the podium soon, thus making a 1-2-3 lead for the VW Group.
Published by José Pontes at April 27, 2021