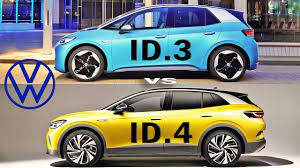 The European passenger plugin market continues on the rise, having registered over 159,000 units in April, and 616,000 units YTD (+136% YoY), placing last month plugin share at 15% share (7.1% BEV), keeping the 2021 PEV share to 15% (6.7% for BEVs alone).
Interestingly, if in April the overall market was up 23% YoY, something that would be expected, after all, 12 months ago markets were all being disrupted by the Covid pandemic, if we compare April '21 with April '19, the overall market was down 25%, which says a lot on the current electrification process.
Growth came from both plugin fields, with BEVs recovering slightly in the plugin share (46% of sales in April, vs 45% YTD), mostly thanks to the BEV push from the Volkswagen Group, allowing the namesake brand to celebrate a 1-2 win in April, a first for the German maker.
Last year winner Renault Zoe was only 5th last month, its lowest standing in over 3 years(!), so after the Nissan Leaf (Best Seller in 2018, 7th in 2020, 16th now) and the Mitsubishi Outlander PHEV (3rd in 2019, 12th in 2020, now below the Top 20), the last bastion of success in the Renault-Nissan Alliance is also suffering, so the warning sirens must be ringing in the Renault & Nissan European HQ's...
Looking at April Top 5 Models:
#1 Volkswagen ID.4 – Sitting in the vortex of the current hottest trends (Plugins and compact Crossovers/SUVs) much is expected from the new Volkswagen, especially considering that its ID.3 sibling hasn't yet set the market on fire...The ID.4 doesn't have much margin for failure, and so far it hasn't disappointed, after the 5,000 units of March, April saw it reach 7,565 registrations and win its first monthly Best Seller award, but one wonders at which point will it reach the cruise speed, and how high will it be, because the fiercest ID.4 competitor comes from the inside the VW Galaxy and it's not the ID.3...(more on that below), but back at last month performance, the German EV had 3 markets in the four digits, with Norway (1,824 units), Germany (1,446) and Sweden (1,444) all scoring 4-digit performances.
#2 Volkswagen ID.3 – After the end of 2020 registrations rush and subsequent hangover, the German hatchback is slowly returning to form, by having 5,941 deliveries last month, its best score in 2021, allowing it to return to the podium and provide a 1-2 win for Volkswagen. Regarding April, the ID.3 performance was heavily based in its home market, with Germany taking almost 40% (2,264 units) of registratrions, being followed from a far by the United Kingdom (815 units) and Sweden (469).
#3 Ford Kuga PHEV – After a few battery issues last year, the Ford compact crossover, known as Escape in the USA, is back in top form, having been last month best selling plugin hybrid, with 4,300 units, thus ending a 3 month winning streak from the Volvo XC40 PHEV. With Ford now launching the much antecipated Mustang Mach E in Europe, one wonders if the Kuga PHEV will suffer from internal competition in the coming months. In April, Germany was by far the best market for the Ford nameplate, with 1,196 deliveries, followed by the United Kingdom (612 units) and Denmark (630), with the popularity of the Kuga PHEV in the Nordic country being a true case study, as the crossover was already the Best Seller in the overall Danish market in more than one occasion.
#4 Volvo XC40 PHEV - The smallest of Volvo's PHEV lineup continues its road to success, together with the popularity of the XC40 in the overall European market (compact SUVs/crossovers are all the rage now), with the Swedish carmaker selling their plugin hybrid versions as just another trimline in Europe, the XC40 PHEV has become a hot seller across Europe, and that is visible in the sales distribution, in April, the Belgian-built Volvo scored 4,118 registrations, with several markets scoring similar results, like in Germany (540 units), the United Kingdom (562), Italy (532), France (487) and Belgium (474). Without production constraints and experiencing strong demand, the compact Volvo remains the strongest candidate for the 2021 PHEV Best Seller title.
#5 Renault Zoe – The 4,083 deliveries show that the French hatchback is yet to recover from the last year end peak effort, and one now wonders if demand will ever recover, and this is especially more worrying when we consider the context of doubling sales in the European BEV market. In any case, the main markets in April were the usual, with Germany (1,268 units) leading, followed by France (1,265), while Italy (721), was a distant 3rd. 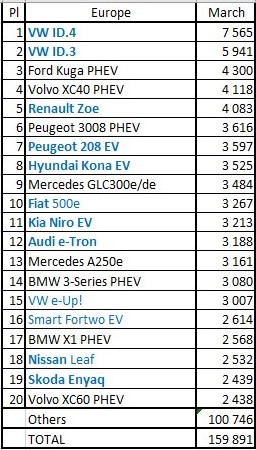 Looking at the remaining April table, one should highlight the Peugeot 208 EV ending less than 500 units behind its arch rival Renault Zoe, so the Pug could very well win soon the monthly sub-compact/B-segment Best Seller trophy, a first for the small Peugeot and also a mark in the rise of Stellantis as a major force in the market.
Still on the subject of Stellantis, the #6 Peugeot 3008 PHEV and the #10 Fiat 500e had their highest table standings this year last month, thus making 3 Stellantis models in the Top 10, a new record for the Conglomerate.
But looking at the Top 20, the OEM with the most number of models was the VW Group, with 5 models, all BEV, besides the aforementioned ID.3 & 4, the Audi e-Tron was 12th, the VW e-Up was 15th, and in #19 we have the Skoda Enyaq, that joined the table right in its first full sales month, and do not be surprised if the Czech-station-wagon-that-thinks-it's-an-SUV reached the Top 10 in May, as the Skoda EV is currently the most competitive MEB-based model one of the best EVs around, maybe even the best reasonably priced family EV in the market, with competitive pricing, space and practicality, without losing much in premium-ness to its VW counterparts...Actually, i believe the only thing stopping it from having even greater success is the badge itself, had it a more popular/"aspirational" badge and it could become the Best Selling EV in Europe.
Another OEM with a good month was Daimler, with 2 Mercedes and 1 Smart models in the table, with the popular GLC PHEV returning to a Top 10 position, while the Smart Fortwo EV continues to post solid results, despite its underwhelming specs.
Outside the Top 20, a mention to 4 BEVs in the vicinity of a Top 20 position, 2 from Stellantis, the Opel Corsa EV (2,272 units) and the crossover Peugeot 2008 EV (2,122), while the other 2 are from the BMW Group, with the Mini Cooper EV (2,283 units) ahead of the veteran BMW i3 (2,043).
Expect the Opel and Peugeot to reach Top 20 positions during the current months, something that the Mini should also achieve, as for the German EV...Come on, BMW put on a 55 kWh battery in it, the i3 deserves to end its career with a bang, and a new, bigger battery, would the the perfect excuse to do so, after all, its design continues fresh and it is still the best premium small EV around...And a future classic. 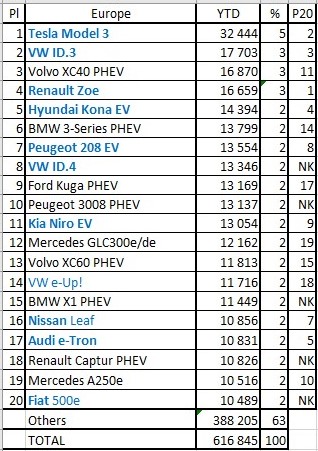 Looking at the 2021 ranking, the main news belonged to the ID family, with the Volkswagen ID.3 jumping two spots to the runner-up spot, while the ID.4 joined the table in #8, no doubt a temporary position, as VW's crossover should join the Top 5 in May, and from then on, a podium position shouldn't be that far away.
Now...will it be enough to displace the Model 3 from the leadership? I doubt it, with the Model Y production delayed, demand should remain strong throughout the next two quarters, and with 15,000 units separating it from the #2 ID.3, i just do not see how can either of the ID models reach within shooting range of the Tesla sports sedan.
A different question is looking at sales by brand or OEM, as currently Tesla in Europe is a one trick pony fighting against brands/OEMs with increasingly longer lineups. But more on that later...
Elsewhere, the Climber of the Month was the Ford Kuga PHEV, that jumped 3 spots, to #9, with the Spanish-made crossover now ambitioning a Top 5 seat.
The Mercedes GLC300e/de also had a good month, climbing to 12th, surpassing the Volvo XC60 PHEV and becoming the new midsize SUV Best Seller.
Still on the second half of the table, the Audi e-Tron climbed one position, to #18, but the big Audi is below last year performance levels, when it ended in 5th.
Just below the Top 20, we have the #21 Smart Fortwo EV, with 9,846 registrations, so we have three models (#14 VW e-Up; #20 Fiat 500e; #21 Smart Fortwo EV) separated by less than 2,000 units, somthing that should make the city car one of the most exciting races of the year.
Unlike the models ranking, where we already have a clear favorite, in the makers ranking, balance is the word, but Volkswagen (11%, up 1%), managed to earn an important edge over Mercedes and BMW, both with 10% share, with April possibly signaling the departure of the Wolsburg brand for a win in the manufacturer race.
Below these three we have the #4 Volvo, with 8%, while in 5th we have Peugeot (6%), now with a 1,000 units advantage over the #6 Renault (also 6% share), so it looks that in the race between the two French brands, the Lion is gaining momentum at the expense of its rival.
Looking by Automotive Groups, the Volkswagen Group is far and wide ahead, with 23% share, ahead of Stellantis (14%), Daimler and BMW, both with 12% share.
Do not expect the VW Group to lose their commanding position in Europe anytime soon, as neither Stellantis (not enough firepower in the higher end of the market), nor Daimler or BMW (not enough firepower in the lower end of the market) are in position to challenge the VW galaxy.
As for Tesla, even if the Model Y becomes a resounding hit next year, and the refreshed Model S/X are also met with success, i do not see them go higher than 14%-15% share by 2022, which is significantly more than the current 5%, but even in this optimistic scenario, the VW Group would still have some 18% by the end of next year.

Tesla's midsize sedan lives in another galaxy, having won a sizeable distance over the competition, highlighting the fact that it won't have significant competition in the next few months, as the Tesla Model Y is delayed and the just arrived Ford Mustang Mach E (123 units in April, no doubt demonstration units) and upcoming Hyundai Ioniq 5 have the small demand -limiting issue that both come from mainstream brands and in Europe, midsize models from mainstream makers simply do not sell as much as premium brands (In the overall Top 10 midsize Best Sellers table, only two models, VW Passat and Skoda Superb, do not come from premium brands).
So yes, they might beat the current #2 Mercedes EQC, but that won't be enough to even get close to Tesla's sports sedan. Then again, in the unlikely event that demand would be over the roof for those two models, both Ford and Hyundai wouldn't have enough production to meet such demand, so...
Speaking of the Mercedes EQC, the electric SUV (1,764 units last month) benefited from Tesla's usual off month (just 1,244 units) to win April's trophy, ending some 300 units ahead of the #2 Polestar 2.
Outside the podium, the expensive Jaguar i-Pace (617 units in April), continues to outsell the BMW iX3 (565 units) that seems stuck at 500-something performances (no wonder BMW is already refreshing it...).

The e-Tron domination is unquestionable and the Audi SUV seems destined to win another category title this year, with Tesla basically giving up on the Model S & X for this year, what they will recover towards the end of the year shouldn't be enough to compensate for the current drought, while the #2 model, the Porsche Taycan (1,429 units last month) is too niche to go head to head with the e-Tron in the sales charts.
Regarding the remaining competition, the Audi e-Tron GT (303 units in April) has finally surpassed the Mercedes EQV Luxury Van, thus making a 1-2-3 lead for the VW Group.
But expect Mercedes to rebound in the second half of the year, with the new EQS, and especially in 2022, with the EQE, a model in which Mercedes has high expectations, namely by winning the category title, thus finishing the current Audi e-Tron domination.
Published by José Pontes at May 27, 2021