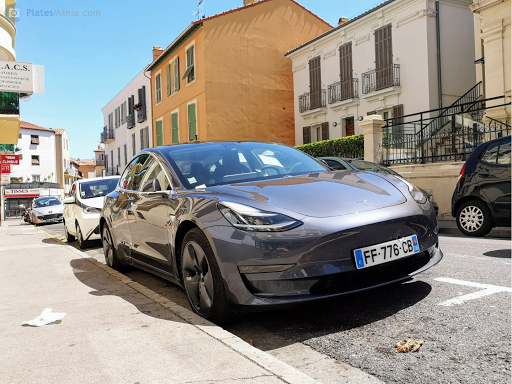 The French plugin market continues on the fast lane, with May's plugin share reaching 17% last month (8.2% BEV), pulling the YTD share to a record 15% (7.1% BEV), which is a good 4% increase over the 2020 result (11%), with the 20% share i predicted for the whole year looks well on target.
Interestingly, most of the growth is coming from PHEVs, with plugin hybrids representing 53% of registrations in May, 1% above this year average and a significant jump over the 40% they had in 2020. Maybe it's time to cut subsidies on plugin hybrids? 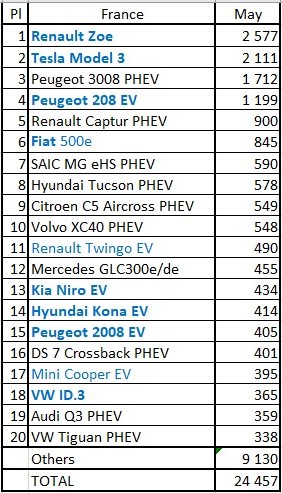 For the first time this year, in May the Renault Zoe managed to win its domestic Best Seller trophy, thanks to 2,577 units, a new year best, so it looks the French maker has (finally) recovered from the late 2020 registration fever, and is back at its usual self, so expect the Zoe to collect a few more trophies during the next months...
...But not in June, because that one seems destined for the Tesla Model 3, that pulled out a surprising 2,111 registrations score last month, with the sports sedan now set to score a new personal best next month (5,000 units? 6,000?), thus beating the expected 3,000-3,500 June score of the Renault Zoe.
These are bad news for the Peugeot 208 EV, 4th in May, with 1,199 units, because not only the Top 2 are in good shape, but also because its stablemate Peugeot 3008 PHEV (#3, 1,712 units), thanks to its recent facelift, the crossover is running in high voltage, scoring another near-record score, it means the small Pug should only have a chance at a podium seat in July, time when the Model 3 takes its usual vacances month off.
On the first half of the table, the biggest surprise is the appearance of SAIC's MG eHS PHEV in #7, with 590 deliveries, shattering its previous record, and making an impressive result for the Sino-British SUV, being also the highest standing ever for a SAIC model in France.
Another surprise on the first half of the table is the instant success of the #8 Hyundai Tucson PHEV, that scored 578 units right in its landing month, so expect the popular Korean SUV to continue riding the wave of success, maybe even scoring a few Top 5 positions soon.
Elsewhere, a mention to the record score of the #19 Audi Q3 PHEV, with 359 units, while its less aspirational relative Volkswagen Tiguan PHEV was #20, with 338 units.
Below the Top 20, a mention to the 331 deliveries of the popular Ford Kuga PHEV, while the Skoda Enyaq had 234 units in only its second month on the market, and keeping with the VW Group compact SUV/Crossover topic, the new Cupra Terminator Formentor PHEV had a record 253 units score last month, so the sporty crossover could be another candidate for a Top 20 presence. 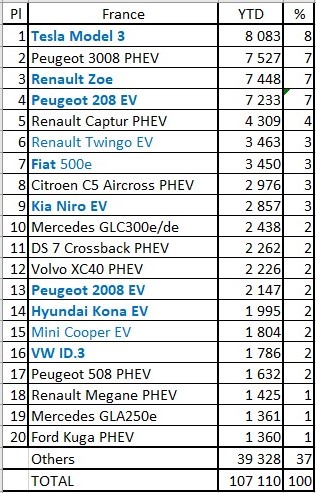 Looking at the 2021 ranking, the Peugeot 208 EV had a steep crash from the leadership, with the Tesla Model 3 (new #1), Peugeot 3008 PHEV (#2) and Renault Zoe (#3) all surpassing the Peugeot EV, in fact this is the first time this year that the Zoe is ahead of its arch rival...
But not all are roses in the Renault team, as the Renault Twingo (only 490 units last month) lost significant ground to its Stellantis rival, with the French EV hanging by a thread (or 13 of them, to be more accurate) to the 6th position, with the Fiat 500e looking set to climb one position next month and beat the local hero in the City car category.
The second half of the table had a number of changes, namely the Volvo XC40 PHEV climbing one position, to #12, which was the same number of positions that the Mini Cooper EV climbed, now in #15.
On the last positions of the table, the Renault Megane PHEV jumped two spots, to #18, while the Ford Kuga PHEV joines the table in #20.
Looking at the manufacturers ranking, Peugeot (18%) and Renault (15%) are stable in the top positions, while Tesla (8% share, up 1%) closes the podium, ahead of the rising Mercedes (7%, up 1%) and Volkswagen (6%).

As for OEMs, Stellantis is the major force, with a commanding 30% share, with the Renault-Nissan Alliance far behind, with only 16%, while the best foreign OEM is the Volkswagen Group, with 13% share (up 2%), well ahead of Tesla, BMW Group and Daimler.
It is impressive that Tesla, with only one model, can sell as much as both German Premium OEMs, that have lengthy plugin lineups, isn't it?
Published by José Pontes at June 09, 2021