April saw the arrival of two models that have potential for a Top 20 position and represent a new chapter in each automaker commitment with EV's. 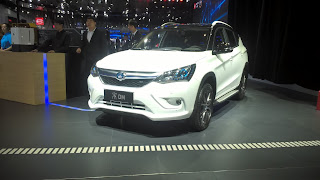 BYD Song PHEV - Landing with a relevant 218 units, this is the first plug-in version of the all-important Song / Yuan crossovers to reach the market, their job is to replicate the BYD Tang success, but in a smaller size and with the option of BEV and PHEV versions. As always with BYD, specs are impressive, with 80 to 100 kms electric range, thanks to a 18.4 kWh battery, and a 0-100 kms/h in just 4.9 seconds, all for only $45.000.

I believe success is pretty much garanteed, just as a Top 20 (10?) feature, with the fiercest competition coming from in-house: After all, the buyer can choose not only between the BEV and PHEV versions of the Song, but the cheaper and smaller Yuan BEV / PHEV versions could also steal some customers...Should BYD be up to the task and make a large quantity of these "Dinasty" EV's on top of the existing portfolio, then the Chinese brand will have a killer second half of the year, not only becoming the biggest Chinese EV maker of the year, but possibly* the largest in the World. For the third time in a row.

* - The only true contender to BYD for the World Ceptre is Tesla, should all go for the best for the American brand and they could reach some 200.000 deliveries this year, same as the BYD goal for 2017.

Buick Velite 5 - A China-only fancier version of the Chevrolet Volt, the Buick Velite is the first serious attempt by General Motors to crack the all-important Chinese EV Market, sharing the specs with the more mundane Chevy Volt allows it to present an outstanding electric range for a plug-in hybrid (116 kms) all while being pretty fast (0-100 kms in 7 seconds), and the best thing is that because it's locally made, it doesn't cost a fortune (266.000 Yuan, or 38.500 USD).

Will it be successful? Being a good product in its own right, the GM product has failed in its first Asian venture (Sales in South Korea average 15 units/month), let's see if the strength of the Buick name in China makes it jump into three (four?) digit sales and steal some customers from the similarly-specced, but cheaper (190.000 Yuan) BYD Qin PHEV. Registrations in the landing month: 67 units.
Published by José Pontes at May 24, 2017