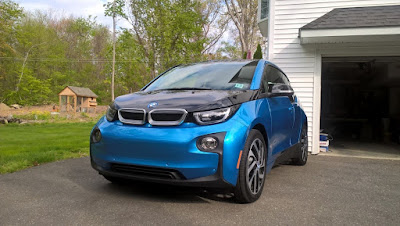 
After switching cars in the morning, leaving the Nissan Leaf and picking up the blue BMW i3 Rex, we prepared the trip to Connecticut, as there would be more than one car travelling, the smaller i3 would be the cargo van, so we filled it with three suitcases and other smaller bags.

After lunch, the battery was again charged and it showed a scarcely believable 150 miles (240 kms) electric range! I hadn’t really driven the car a lot, so I was really doubtful of these numbers, but because the trip was only 105 miles (170 kms), I thought it could be possible to reach Waterbury only in electric mode, if it wasn’t, there wouldn’t be many miles running on gas, I thought. 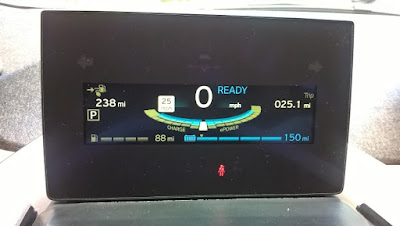 And off we went, profiting from the mild temperatures (16ºC / 60ºF) we left the A/C switched off and the first miles confirmed the different character the BMW i3, it had heavier steering and a sportier stance, it felt even smaller next to those 18 wheelers on the Freeway and the iDrive multimedia system was starting to get on my nerves, as the menus and button settings were less intuitive than the touchscreen system of the Leaf.


But those thoughts soon passed as we joined the New York congested traffic, where the handy-size, instant torque and kart-like drive of the i3 helped to explore the small spaces left in the compact traffic.


Soon after the George Washington bridge, a silver Mercedes on our right side started honking at us, to our surprise he was happily looking at the car and giving us thumbs up on it…


It was the first (But not the last) time we saw the star-like attraction that the little i3 creates.


After a couple of scares (Was it just me or are NY drivers nuts?) and a lot of stop and go traffic, the I95 finally was free of traffic and we reached cruise speed, where the i3 proved to be quite stable and powerful, even at speeds that could have been well above the legal limit…


Stopping midway for some refreshments, a small kid with his parent pointed at the car and said: “Uau, that thing looks like a toy car…Cool!!!”


Reaching close to our destination, we made a wrong turn and we tried another big plus of the car, a ridiculously small turning radius, basically we just turned the steering wheel completely and…Voilá! We had switched to the other direction without any other maneuver.


We arrived home and in fact the car not only did the whole trip in electric mode, but after 105 miles, most of it in highway speeds and some occasional A/C use towards the end of the trip, it still had 22 miles to spare. 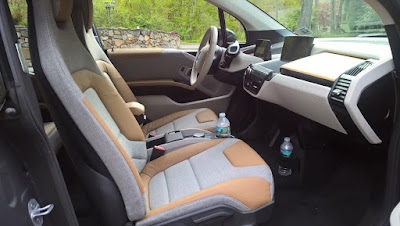 
During these days visiting friends and family, the BMW i3 was a big attraction, with plenty of reactions:


2.       Wow, this thing can go! Mom, you should get one of these! (Father’s answer: “Yeah, but she likes to speed, with a thing like this, she would get speeding tickets everyday”)


5.       Is there an electric minivan? (Answer: There’s the Chrysler Pacifica Hybrid, has 30 miles electric range on top of the gas range). Nice…


The fact is that around Connecticut I didn’t saw a lot of EV’s, besides the usual Teslas (Around two per day), I only saw three Chevrolet Volt (One Gen 1 and two Gen 2), and…That’s it.


Where are all the Nissan Leaf? Do they only exist in California? – I thought.


In this state the people mindset regarding EV’s isn’t much different from New Jersey, they divide electric cars in two categories, the first is Tesla, mentioning the brand coolness and the Autopilot as more important than the fact that they are electric. All other EV’s fall in a second category, where they are pictured as slow, low range and expensive.


The good thing of the BMW i3 is that is shatters two of the three previous preconceptions. Now the price it’s a different story… People still correlate price with size, so the little i3 suffers in that regard.


Regarding infrastructure, I took the opportunity to try a free 22 kW charger in New Haven, while I noticed that CCS fast chargers had a better coverage (If not perfect) in CT than Chademo, which is virtually nonexistent in the state.


On the last night, after having dinner at some friends house, we arrived at the car and we saw three teens staring at the BMW from close.


I switched on the car presence lights and the kids gave a step back, looking at us:


After making a small introduction to the car, they were surprised by the fact that it was electric and by the pick-up truck-like doors.


When I started the car and started moving, one of them said:


That night we had a couple with us in the back seat and he was 1,9 meters (Six foot two), despite this, he was surprisingly ok in the back, not only in height (Hey, I didn’t hit the floor!), but also on knee space.


The i3 doesn’t stop surprising…Hell, even the iDrive system started to make sense! 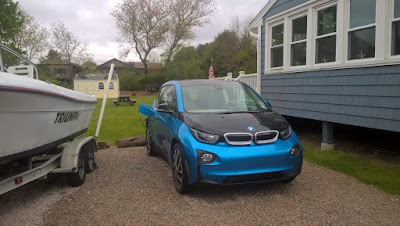 
One would think an 85 mile trip would be an easy thing for the i3, right? And despite a cold (7ºC / 45ºF), rainy night, that remembered the worst of winter in Lisbon, it actually was a fairly easy thing to do with the Bimmer, despite being light and Rear Wheel Drive, it didn’t had the smallest sign of aquaplaning, behaving on the highway like a “grownup BMW” in these gruesome conditions.


Because the car wasn’t fully charged and the A/C was permanently on, the last 10 miles were done using the range extender, inside the car the only difference was a hum coming from the back and a few vibrations, not much different from a regular gas car, but noticeable in the previously serene i3 loft. 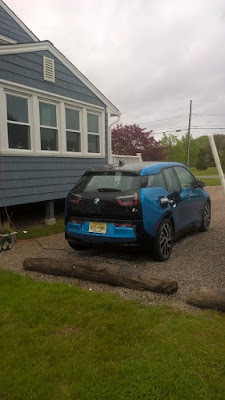 
A 70 mile trip through some really scenic back roads of Rhode Island, with a stop in posh Newport, which proved to be an EV friendly place, where I saw my first Chevrolet Bolt, along with two Tesla and a Cadillac ELR (Beautiful car, BTW).


After arriving to the car in Newport, ready to resume the trip, the driver on my right said:


He got even more amazed when I told him the final destination was Massachusetts…
Published by José Pontes at May 27, 2017