The new generation is doing wonders for the Nissan Leaf, performing its fifth consecutive 200-something registrations month, with the VW e-Golf ending July in the runner-up place, with 182 units, while the Tesla Model S was Third, with 164 deliveries, its best first-month-of-quarter result ever, while its Model X sibling also hit a quarter first month record, with 74 units, which could mean that September might see new deliveries records for both nameplates. Do i hear 1,000 each?

Also of interest, is the fact that PHEVs had their best month (312 units) since they were hit by the end of incentives, back in December 2016, with two models shining: The efficient Hyundai Ioniq PHEV scored 64 deliveries in only its third month on the market, while the new Porsche Cayenne PHEV landed with a bang, by registering 61 units in its first full sales month, being the best start for a PHEV in over two years.

Looking at the 2018 ranking, there were no significant changes in the top positions, as the Best Sellers took some holidays break.

Considering the positive results from Tesla in the usually weak first month of the quarter, above mentioned, the main significant change in the next couple of months on the Top 5 should be the Tesla Model X going after the Second Spot, with the 351 units separating it from the Nissan Leaf probably disappearing, in the next Tesla High Tide (September).

But on the B-League PHEV League there are some interesting developments, if the Porsche Panamera PHEV continues to be Number One, with 254 units (34 in July) and #9 in the PEV ranking, the Best Seller of the Month was for the second time in a row the Hyundai Ioniq PHEV, that finally made its oficial debut in this market thee months ago, with 64 units, jumping two positions to #12. It seems the efficient Korean hatchback could make the PHEV podium soon, with only the leader Panamera PHEV being safe from it.

Speaking of Porsche, the new Cayenne PHEV joined the Top 20, in #16, thanks to 61 registrations last month, the nameplate best performance in this market since December 2015,  with the German SUV possibly going for a podium position in the PHEV ranking by the year end.

If that were to happen, a 1-3 podium for Porsche in the PHEV league would be a great prelude for the Taycan arrival, wouldn't it?

Elsewhere, the BMW 330e climbed two positions, to #14, thanks to 31 deliveries, its best result in 19 months, which is rather surprising, considering this could be one of the most hardly hit models by the arrival of the Tesla Model 3. Is BMW trying to make the most of the 3-Series PHEV, before Tesla's midsizer casts its long shadow over it?

Outside the Top 20, the Jaguar i-Pace is starting to gain...pace, with 23 units being delivered last month, with the British Crossover now just 6 units away from the #20, expect it to join the table next month, leaping positions from then on, until December.

In the manufacturers ranking, Tesla (29%, down 2%) is miles ahead in the lead, with the runner-up Nissan (14%) slightly above Volkswagen (13%), while Hyundai and BMW (Both with 10% share), are waiting for an opportunity to join the podium. 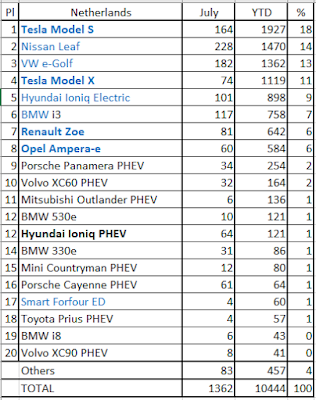 If we add regular hybrids to plug-ins, the domination that Toyota has in other markets is diluted here, with the Best Selling Hybrid being the Kia Niro, ahead of the Toyota C-HR and Yaris Hybrids.

Outside the podium, two BEVs show up ahead of the remaining HEVs, with the Nissan Leaf being #4 and the VW e-Golf #5.


Despite being the first quarter of the month the Model S held steady in Second Place, mirroring the July results, with the Californian staying only behind the BMW 5-Series, by just 15 units (179 vs 164).

Big SUV's were hardly hit with the end of PHEV incentives, to the profit of the American Sports-Minivan-SUV, the only one  still selling in significant volumes.

But it seems the Model X has now found competition worthy of the name, with the Porsche Cayenne outselling it (77 vs 74) last month, mostly thanks to its PHEV version, that with 61 units, it represented 79% of all Cayennes registered in July.

This allowed the German SUV to jump two positions to #3, and could even threat the Volvo XC90 in the months to come.
Published by José Pontes at August 23, 2018