Jaguar i-Pace steps up the pace

This good market performance was the result of several good individual results, starting with the Best Seller of the Month, the Nissan Leaf, that registered 657 units, its second consecutive record month. Interestingly, the Nissan Evalia EV (38 units) also had its best result in 4 years, which means both of Nissan EVs are expanding sales.

The Jaguar i-Pace reached the Second Spot, with 607 units, antecipating an historic December, where deliveries should cross well into the thousands…Jaguar dealerships will probably have to work on overtime during December, in order to avoid a delivery-hell.

This time the Tesla Model S won the Bronze medal, thanks to 428 deliveries, its best off-peak result ever, so we can expect another 1,000-plus performance in December.

Interestingly, the 308 Tesla Model X deliveries also represented that nameplate best off-peak performance here, so we can expect at least some 800-1,000 deliveries in December for the Sports-Minivan-SUV, which would make Tesla cross the 2,000 deliveries in one month. Well, it should also be a nice rehearsal for the upcoming Model 3 delivery tsunami...

Of course, the higher taxation of expensive BEVs next year might have something to do with this sales surge, but something tells me (ahem, Tesla Model 3...) this explosive growth is set to continue through 2019.

Looking at the 2018 ranking, while the Top 8 positions remained the same, the Jaguar i-Pace keeps jumping positions, with the British SUV reaching #8 in November, as it tries to end the 2018 ranking in the podium.

Just outside the Top 10, the Mitsubishi Outlander PHEV rose two positions to #11, thanks to 209 registrations, the nameplate best result in 23 months. With the Japanese SUV only 52 units behind the current Best Selling PHEV, the #10 Volvo XC60 PHEV, with 455 units, it seems the Mitsubishi model will recover the trophy it has won for the last time in 2015.

Outside the Top 20, a mention to the Land Rover PHEVs, with the  brand delivering 69 plugin hybrid Range Rovers, a new record for the maker. 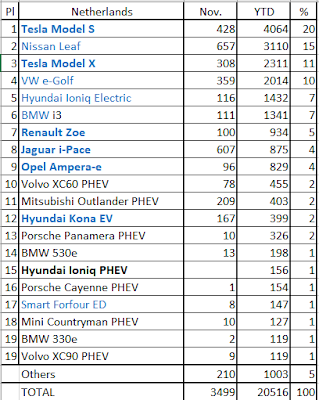