57% PEV Share!
Despite not hitting March's record sales, mostly due to the PHEV slump (-38%), nervertheless, thanks to the BEV brilliant performance (5.087 units, +88% YoY), PEV sales grew 20% in November to 7.001 units, that added to the sales drop (-10%) on the mainstream market, leading to large BEV (41%) and PEV (57%) shares, and the share could have been even more outlandish, if this result had happened on an end of quarter, as we would had the help of the Tesla Tide. Maybe in December?

In this context, 2019 should see Norway get some 70% PEV share, with peak months possibly reaching 90%. Ambitious? Possibly, but this year market share is already at 52%(!), and next year we will see the Tesla Model 3 cross the ocean, a 60kWh Leaf, the Kia Niro EV, first full year of the Hyundai Kona BEV, etc...Now, it doesn't sound so outlandish, does it?

Proof of that are plug-ins reaching 57% share last month, with the fuels mix now showing BEVs well above everyone else (41%), followed by gasoline and diesel, both with 17% share.

At this pace, Diesel should be dead in Norway in two years time...

Looking at last month Top Sellers, if the podium didn't provided any surprise, with the leader Nissan Leaf scoring another four-digit performance, with 1.209 units, being followed by the #2 VW e-Golf and the #3 BMW i3, that had 714 deliveries, the model best result in two years.

Outside the podium, things were more interesting, with the refreshed Mitsubishi Outlander PHEV performing  its best result in the last 32 months, with 616 units, reaching the Fourth Position, while the #5 Renault Zoe broke its personal record, by delivering 464 units.
. 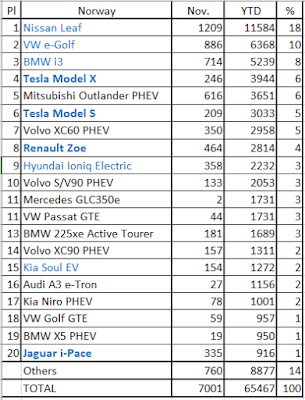 Looking at the 2018 ranking, the only Top 10 change was the Hyundai Ioniq Electric climbing to #9, thanks to 358 deliveries, a new record for the Korean EV.

Interestingly, there are 7 BEVs in the Top 9 spots, which says a lot on where the market is going...

Elsewhere, the Korean nameplates continue to climb positions under the radar, the runnout-mode Kia Soul EV is now #15, having surpassed the Audi A3 e-Tron, while the Kia Niro PHEV climbed to #17, getting in front of another VAG plugin hybrid, the VW Golf GTE. Interesting coincidence, isn't it?

Proof of the BEV mommentum is the Jaguar i-Pace joining the ranking, in #20, thanks to 335 units, while another long range BEV is about to join, as the Opel Ampera-e is now #21, with 903 units, thanks to 178 deliveries in November, the model best performance in over a year. Has General Motors finally decided to open the production gates (and European allocation) of its small EV?

A final reference to the 130 registrations of the Hyundai Kona EV, due to production constraints in Korea, it seems the local Hyundai importer is having troubles to satisfy the thousands-long waiting list for the model.

Looking at the manufacturers ranking, Nissan is in the lead (19%), now being followed by Volkswagen (15%), that has surpassed BMW (13%, down 2%), with Tesla and Volvo, both with 11% share, still trying to oust the German brand from the podium, although realistically, only Tesla has a fighting chance to reach Bronze, as it will benefit from the usual end-of-quarter peak, while their two competitors are too dependent from the increasingly out-of-fashion PHEVs. 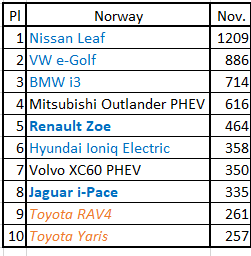 With the PEV share at 57%, the plug-in market continues to merge with the mainstream, breaking down sales by fuel source, we have three BEVs in the podium, followed a balanced mix of plugins, with 3 BEVs and 2 PHEVs, but the telling story is that the Best Selling HEV (Toyota RAV4) was only #9, with the remaining Top 10 hybrid (Toyota Yaris) ending behind it.

I mean, it's not that difficult, we just need to add both Tesla models…

Also interesting is to see Toyota, historically a popular brand in Norway, is losing significant portions of share due to the fact that it doesn't have BEVs…

A taste of things to come? Possibly, and also a warning for other brands with no short term EV plans: "Go EV or Lose (share)"