VW Passat GTE makes a splash in a hot market
Share-wise, Finland has become a major plug-in market, following the trend of its Scandinavian neighbors, and if November hasn't managed to beat the previous month record (909 units), the 857 still represented a 97% growth rate YoY, allowing the 2019 PEV Share to continue growing, now at 6.5% (10% last month), so Finland is a strong candidate to be part of the strict "two digits club" next year.

But much of this growth has to do with the recovery of PHEVs, now representing 75% of all plugin sales, with Finland continuing to be a stronghold market of plugin hybrids, as BEVs have always been outsold by PHEVs since 2011...

These are changing times in the models ranking, with the Tesla Model 3 (only 3 deliveries, bla, bla, bla, Netherlands, bla, bla bla…), being removed from the runner-up spot by the Volvo S/V60 PHEV twins, making a 1-2 lead from Volvo, but nevertheless, the Tesla midsizer is already making history, as the last BEV to reach the podium was the Tesla Model S, back in 2015…

Elsewhere, the revised Volkswagen Passat GTE made a thunderous landing in this market, with the German midsizer scoring a record 158 units in its first full sales month, allowing it to join the ranking right into the Top 10, in #9.

Outside the Top 20, a mention to the 36 registrations of the Porsche Cayenne PHEV, and with a Top 20 position just 12 units away, we wonder if we will see it joining the Top 20 in December. 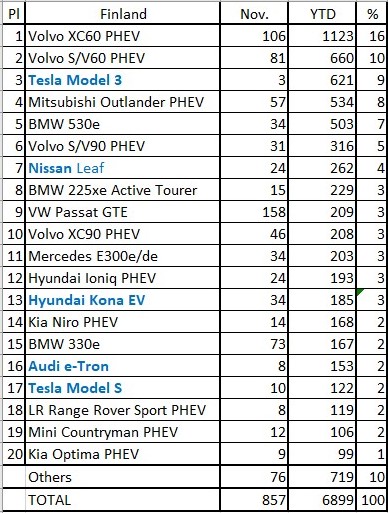